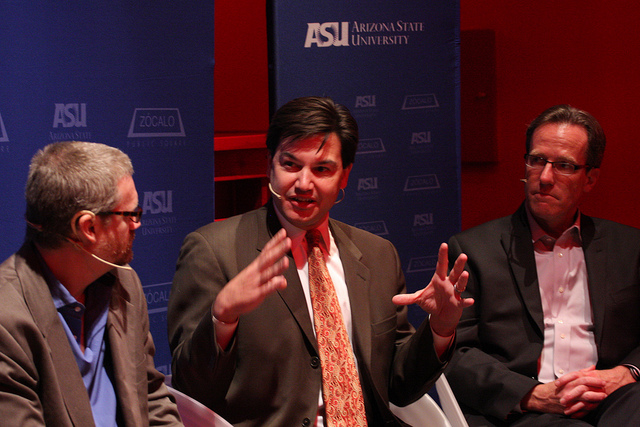 “Are we in danger–or perhaps it’s not really a danger at all–of becoming Los Angeles?”

Former CNN anchor Aaron Brown posed the question to a panel of Phoenicians to discuss before an overflow crowd at the Scottsdale Museum of Contemporary Art’s lounge, at an event co-presented by Arizona State University, where Brown is Walter Cronkite professor of journalism.

“What we’re trying to figure out tonight in some respects is who we are–who we are as a community,” said Brown. Specifically, is Phoenix destined to resemble L.A., another sprawling Western city with pollution, traffic, and a talent for reinvention?

“I don’t think there’s a chance,” was the answer of architect and urban designer Wellington Reiter. He cited L.A.’s “massive” Pacific Standard Time collaboration among cultural institutions as an example of what makes L.A. different. Reiter called Pacific Standard Time, which looks back on L.A.’s contributions to postwar art, a “defining document” for the city. He said that Phoenix isn’t able to produce such a document now–and he doesn’t know if it ever will be. 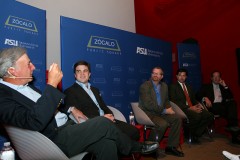 But Greg Esser pointed to his own project–he directs Arizona State University’s Desert Initiative program, which collaborates with area institutions in the study of the future of the Southwest–as proof that Phoenix can do something similar, by looking forward not back.

And Jonathan Koppell, the dean of the College of Public Programs at Arizona State, noted that L.A. isn’t so sure of its identity either, though the nature of the confusion is different in the two cities.

L.A. has competing centers. In Phoenix, he said, “there’s not necessarily a set of rivals for what constitutes Phoenix so much as a lack of passion about what our center is.” Yet he was quick to say that he thinks there is something at Phoenix’s center–not a particular industry like Hollywood, but rather a sense of opportunity: Phoenix offers “the freedom, the ability to do what you want to do without anybody knowing about it, without anybody having the ability to say anything about it.”

Brown agreed. “This is Alaska with much better weather,” he said he tells people. “This is where people go to be left alone, to invent or reinvent themselves.”

Michael Christie, the director of the Phoenix Symphony, said that Phoenicians have to invent things: “Anybody doing arts here has to see themselves as a foundation-layer, and as a cultural standard-bearer.” His hope for the city is that it gains “a sense of what the vibrancy and energy [here] is”–not necessarily the “turbo-charged” vibe of Los Angeles, but an established pulse and feeling.

Esser thinks that’s changing. When he moved to Phoenix in 1996, “the joke was, ‘How is Phoenix different from yogurt? Yogurt has culture.’” But the downtown Phoenix art community has matured over the past 15 years thanks to a grassroots movement, and people capitalizing on the city’s pervasive sense of opportunity. 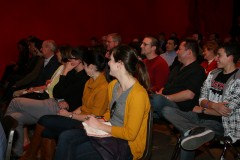 The economic downturn also has been a catalyst for development, said Christie and Reiter. Young chefs, for example, have been able to open restaurants because rent is low.

But does economic and cultural development build a sense of community? Koppell pointed to a survey by the Center for the Future of Arizona, which found that the people of Arizona have a “higher-than-normal attachment to Arizona”–but a lower attachment to their specific communities. “They love this place, but they don’t necessarily care about who’s around them,” he said.

Brown attributed that to a feeling people have that they’re on their own in Phoenix, with more space and no roots. But Reiter said his sons, who grew up mostly in Boston, had adopted Arizona as their home. And Christie said that although it’s possible to be “siloed if you choose,” the city’s increasingly cosmopolitan culture makes connection easier. You can go out one night and strike up a conversation with someone you’ve seen around town, he said.

This is in part a function of the city’s youth, a topic the panel returned to in terms of philanthropy. Although Phoenix was once led by “the Phoenix 40” network of business owners and government leaders, there’s a vacuum today. Many businesses that were big givers were bought by national corporations. Plus, said Christie, “the first generation of substantial wealth builders” in Phoenix is still alive; most money is given away at death. 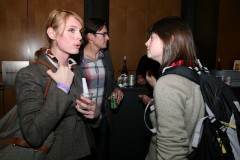 Brown asked the panel what this leadership vacuum means for the state of primary education in the city. The panelists agreed that education is dismal, but they pointed to different people who are addressing it, from Mayor Greg Stanton to former Intel CEO Craig Barrett.

In the question-and-answer session, the audience–both long-time Phoenicians and newly arrived, much like the panelists themselves–were eager to join the conversation. How do our demographics dictate how our city develops?

“We’re a much more diverse community than we recognize or give ourselves credit for,” said Esser. “We’re fairly dispersed ethnically if not economically.” But “we don’t tell that story very well at all.”

Koppell added that the sprawl of Phoenix is part of the reason the diversity is difficult to give narrative to. In higher density cities, he said, you’re forced to interact much more often with people who aren’t like you.

The lack of a core also dictates development. Responding to a question about whether Phoenix needs a non-East Coast model of urban planning, Christie said that the symphony has struggled with getting people from other areas and neighborhoods downtown.

Phoenix is “an archipelago,” said Reiter, with over 20 municipalities competing for cultural resources, which makes planning difficult.

And despite its sprawl, even L.A. began with a core at the center, added Koppell. “If we were looking for a model of Phoenix urbanism, it has to be distinctive,” he said. You “can’t map other types of urbanism onto Phoenix.” 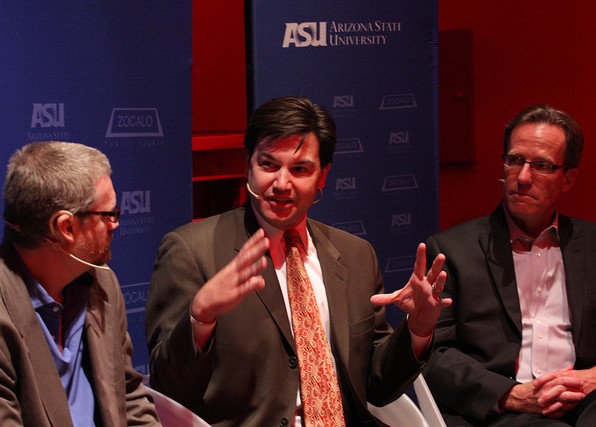