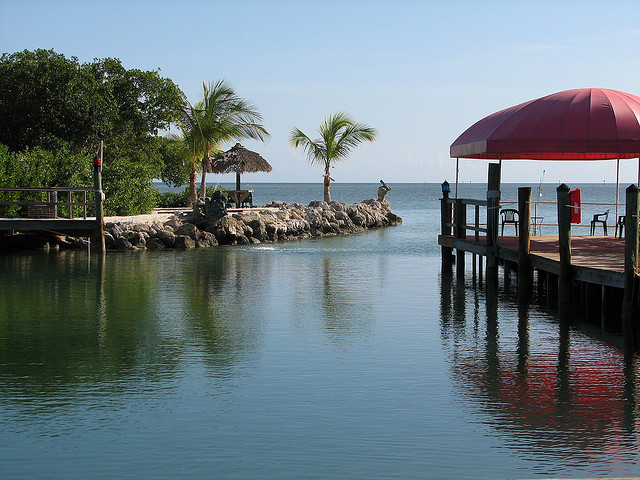 We hear so much about presidential candidates–and so little about life in the states that elect them. In “Beyond the Circus,” writers take us off the trail and give us glimpses of politically important places. Today, Florida.

The name Julia Tuttle rarely evokes more than a quizzical expression from Floridians, but in the heart of downtown Miami, amidst glittering steel spires and Art Deco architecture, stands a life-size bronze statue of the oft-forgotten Mother of the Magic City. Her skirt is decorated with reliefs of pioneers working the land, Native Americans navigating waterways in hollowed-out canoes, and alligators lurking in swampland. One hand holds a basket of oranges; the other extends an orange blossom to passersby.

Tuttle, an entrepreneur and widow, settled in Florida after inheriting an orange grove from her father and using the funds from the sale of her husband’s company to buy huge tracts of land. She spearheaded the campaign to turn the vacant riverfront of Biscayne Bay into a flourishing economy.

According to lore, she enticed Standard Oil founder and railway tycoon Henry Flagler to extend the Florida East Coast Railway to Miami by sending him a bouquet of fresh orange blossoms after a freeze in 1894 had claimed more than half of the state’s orange groves. Impressed by the potential of the warm climate, Flagler ordered the railway extension, and Miami was incorporated just a few months later, the first and largest city founded by a woman.

Nearly a hundred years after Tuttle spent every dime she had to build a community on the tip of the continent, I was dying to run away from it. I was geeky, studious, and introverted. My interests were in books and computers, not crowds or the outdoors.

But then a Florida university offered me a scholarship I couldn’t pass up, and I resigned myself to another four years in the state. I picked up a job writing travel reviews for a local magazine. As the youngest staffer, I received the far-flung, less convenient assignments; my first was the Keys.

The Keys, which Floridians often call the “Conch Republic” (it’s a nod to a tongue-in-cheek secession from the United States by the city of Key West in 1982), are a string of islands connected by 127 miles of bridges. The turquoise seascape and tropical climate were comfort and inspiration to greats such as Ernest Hemingway, Jimmy Buffett, Tennessee Williams, and Truman Capote.

A longstanding dress code of flip-flops is silently enforced by the locals, and grizzled sailors sling back glasses of Old Crow at Sloppy Joe’s, Hemingway’s favorite Key West haunt. Papa was known to stand on the prow of a boat captained by Sloppy Joe Russell himself, shooting mako sharks with a Thompson submachine gun.

Hemingway made a semi-permanent home for himself in the Keys. There he wrote For Whom the Bell Tolls, A Farewell to Arms, The Snows of Kilimanjaro, and To Have and Have Not, a novel that took place in the Keys during the Depression (it was the only one of his works to be set in America).

I returned from my assignment with a tan and a fascination with the 1,350 miles of coastlines that wrap around the peninsular Florida. I even fell for a surfer who made the news when she took to the waves while others were boarding up their homes, preparing for Hurricane Wilma. We’re still together.

The Keys led to an appreciation for other places in the state, too–like Cape Canaveral, which houses NASA’s home base and primary launch site, the Kennedy Space Center. Along with many Floridians, I decried the decision to defund the Space Shuttle program, a source of both pride and jobs for Brevard County residents. For years, delis, shops, and astronaut-themed restaurants teemed with tourists and natives who’d crowd the highways for 13 miles to get a glimpse of history. They’d sit in silence and wait for the thunderclap of the sound barrier breaking over the Cape.

At a shuttle launch there were no Floridians or tourists, only Earthlings, humans, small and hungry, staring into the stretches of the universe and daring to ask “What if?” When I watched the live telecast of the Atlantis lifting off on its final mission last year, I hid my tears from my coworkers. “They’re not from here,” I told myself. “They wouldn’t understand.”

Further north, the Space Coast gives way to the First Coast and the oldest continuously inhabited settlement founded by Europeans, the city of Saint Augustine. Juan Ponce de Leon made landfall at Saint Augustine in 1513 in search of the fabled Fountain of Youth. Today, there is a park there that bears his name, complete with a gurgling fountain with water that smells like rotten eggs. (If stench and immortality are correlated, then Juan Ponce came quite close to his goal.) The shores of the Ancient City are pockmarked not with high-rise hotels and glamorous nightclubs but with crumbling lighthouses and castles. The most prominent landmark is the Castillo de San Marcos, a five-pointed fortress built to defend the city, with rusted cannons never fired and mossy walls never breached.

As I developed an affinity for natural allures of the state, I came to like Walt Disney World and the surrounding theme parks less and less. But I have to hand it to the Mouse. Disney is the largest draw for Florida’s 50 million annual tourists. President Obama visited Disney World–not Orlando, not Florida, Disney World–to unveil a plan on boosting the tourism industry. We need the extra jobs.

If tourism were my purpose here, though, I’d skip Disney and head to the unincorporated town of Cassadaga, an hour northeast of Orlando. Dubbed the “Psychic Capital of the World,” Cassadaga is home to the country’s largest per-capita population of spiritual readers and psychic mediums. One of town’s most intriguing places is a brick graveside bench called the Devil’s Chair. Rumor has it that the devil will make an appearance to anyone who sits in it long enough. One night, when I was still in college, some friends and I ventured in search of the Chair and tempted fate by spending the night there. That night, we waited in the dark, and, just after I took a swig of off-brand whiskey so sour and strong that it brought tears to my eyes, I saw it: a floating bauble of light in the distance. I blinked hard.

“This is it,” I thought to myself. “We have provoked the gods, mocked the spirits, and we are going to die. And I’m going to die first.”

But it was not the Devil. It was a cop who was stationed in the cemetery to rout out misfits like us. We lied, apologized, and bartered for our release with the bottom-shelf whiskey we’d brought along.

Today, I’m not trapped in Florida. I can leave anytime I like. And I’ve indeed spent some time outside of the state I’d once denounced as thoroughly incompatible with my character. But I found myself homesick, and I returned. Now, I work as a writer in my hometown, Fort Lauderdale, where I live with my surfer and our rescued mutt. When I was offered a job in New York last year, I came up with all sorts of excuses to turn it down. But I’ve since admitted to myself that I no longer want to leave.

We have our problems, sure. We worry about education and overcrowding in our schools, our quick-to-rise and slow-to-fall unemployment rate (it’s down from 12 percent, but still over 10 percent), our 4.5 million retirees who need reliable heath care. But we’re Floridians. We’re innovative, determined, and tough. We took the mosquito-infested swampland nobody else wanted and turned it into a paradise. We’re hurricane surfers. We’re Julia Tuttle.

Recently, in downtown Miami, I decided to stop by an open-air concert at Bayfront Park and noticed Tuttle’s memorial statue. Nearby, a pair of tourists bedecked in Tommy Bahama and fanny packs were talking with each other cheerily. “Pardon me,” I interrupted. “Sorry, would you mind taking my picture?”

“Of course, sweetheart,” said one, betraying a Midwestern accent. “Are you here on vacation, too?”

“No,” I replied, leaning on Tuttle’s shoulder and smiling into the lens. “No, I was born here. This is home.”

Alexandre Wall is a writer living in South Florida. Her stage play, “Break Through,” is currently on tour.