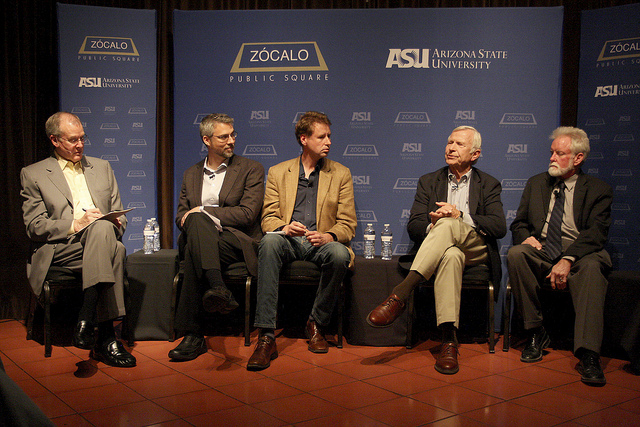 “How many people here are natives of Arizona?” asked Flinn Foundation President and CEO Jack Jewett. Only a few hands in the large audience at Tucson’s Hotel Congress, at an event co-presented by Arizona State University, went up. It was a reflection of the transient nature of the state’s population. But it was also, said University of Arizona anthropologist Thomas Sheridan, an affirmative answer to the question that had been presented to a panel of Arizonans with deep ties to the state: Does Arizona history matter today? 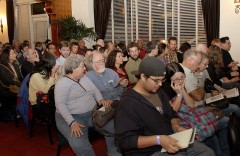 “The fact that we have so few natives here is a good indication of why we need to have an understanding of this state,” he said, “because if we don’t know where we came from, then we certainly won’t have any idea about where we’re going.” In the 1980s, out of every 10 Arizonans who moved to the state, seven had left a decade later, dissolving any sense of history–and marking a political sea change that began with the election of Republican Evan Mecham as governor in 1986. Mecham hadn’t been taken seriously in Arizona politics, but an influx of new voters without ties to the community allowed him to defeat longtime Arizona House Majority Leader Burton Barr in the gubernatorial primary.

Center for the Future of Arizona Chairman and CEO Lattie Coor said that he’d personally witnessed this change in Arizona politics. When he first returned to the state in 1990, after three decades away, he found very open politicians and a “refreshing view that serious people were willing to be serious about what our future could be,” but all that shifted. Citizens stopped talking with one another, legislators stopped talking with one another, and the gulf between citizens and legislators widened.

Arizona’s status as a land of opportunity has a certain social cost, said Tom Zoellner, author of A Safeway in Arizona: What the Gabrielle Giffords Shooting Tells Us About the Grand Canyon State and Life in America. When his family moved to a new Tucson subdivision in 1980, they found a community unmoored from history. The streets had obscure Spanish names like “Camino Padre Isidoro”–Zoellner still has no idea who Father Isidoro was–and simply weird Spanish names like “Camino Alberco” (“Swimming Pool Street”). Nevertheless, the state has a rich hidden history. The Safeway where Congresswoman Gabrielle Giffords was shot is in a shopping center called La Toscana Village that “seems like a non-place, dropped out of nowhere.” But “it is completely in the character of post-war Arizona”: built by a newcomer from Chicago with “questionable money” on top of a dried-up underground river. “To understand Arizona we need to understand that river,” said Zoellner. 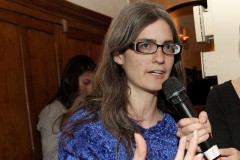 Impeding such understanding is a “myth of individualism” that keeps even native Arizonans from delving into their history, said Northern Arizona University historian Eric Meeks. “When I studied history, it never occurred to me to study the place that I lived in,” he said. Arizonans tend to think that the state was a wilderness before the U.S. expanded westward–Phoenix is named for rising atop ashes–and yet the state’s history goes back thousands of years. Arizonans tend to believe that the federal government should stay out of their business–ignoring the role it played in the state’s history from the conquering of the frontier to public projects like dams to World War II contracts that fueled private industry.

Where does all this leave Arizona going forward?

“Arizonans agree on more than they disagree on the major issues facing us,” said Coor. “They love this place–are attached to this place, passionate about and loyal to this place” far beyond people in other parts of the country. Yet they are “less engaged with their communities” than almost anyone else. The answer, he said, lies in making civic engagement a higher priority.

Zoellner believes that bringing people together physically can also make a difference, pointing to attempts in Phoenix (the creation of a series of walkable “urban villages”) and Tucson (the Rio Nuevo project to revitalize downtown) to build better-connected physical communities as plans that failed but had the right intentions. 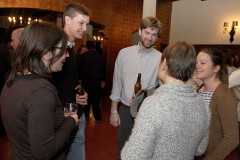 Meeks agreed, pointing to the nature of the evening’s event–meeting in a historic hotel to talk about Arizona’s past–as well as his own experience attempting to convince Flagstaff to build sidewalks in his neighborhood so that kids could walk to school.

Sheridan believes Arizonans need to cross ethnic and racial lines in order to move forward. “We live in an incredibly diverse state,” he said, with a large Hispanic population and Native Americans who have been here for thousands of years. Yet Mexicans and Mexican culture are being assaulted. “The state legislature has gone so far as to write a bill targeting one program in one school,” he said, pointing to the Tucson Unified School District’s decision to eliminate its Mexican-American studies program. “If we want an Arizona that we can be proud of,” he said, “we’ve got to find what we in the collaborative conservation movement call the ‘Radical Center.’” Occupying this center, said Sheridan, are people who find common ground, who solve problems, and who respectfully agree to disagree about the issues that divide them so they can concentrate on the issues that unite them. 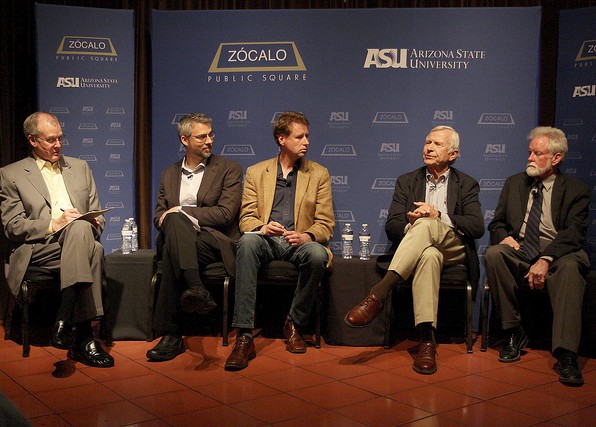