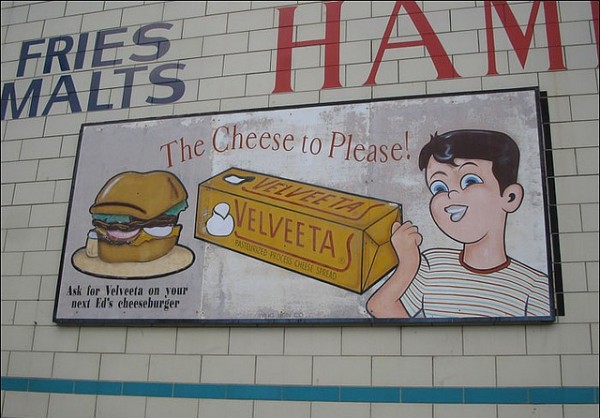 Americans have never had as many food choices as they do today. Nor have they ever relished food more for its own sake. It’s all very haute, this attention to cuisine, and it’s good for the restaurant business. It’s also easy to forget that, only a few decades ago, a good meal was hard to find outside of a major city, and, if you ordered pineapple salad, odds were you’d get pineapple suspended in Jello. But that doesn’t mean everything has changed for the better in the world of food. So in advance of “Does Foodie Culture Do Anyone Any Good?“, a Zócalo event, we asked several notable names in the world of food to offer their thoughts about what, from the era when salad meant Jello, we should be saddest to have lost. Should we miss anything?

We Should Miss the Garish Showmanship

Don’t get me wrong. I’m as happy as the next guy to lean against a dumpster and down a proper New England-style lobster roll. I can glibly debate the relative merits of various San Gabriel Shanghainese dumpling houses. And I’ll occasionally join wealthier foodies in a spare, too-loud dining room to ooh and ahh over a celebrity chef’s balsamic-drizzled heirloom tomato. But I increasingly miss what made L.A.’s famous restaurants unique: not their cuisine, but their Hollywood attitude toward dining out. Whether they served “Scalloped Chicken a la King” under a giant brown hat, “Beef Foo Yong” in an outrigger-bedecked “Polynesian” restaurant, or crispy, ground-beef “Rolled Tacos” amid a menagerie of plastic parrots at a “Spanish” cafe, L.A. restaurants used to know how to dress a set. Like the movie palaces and Busby Berkeley musicals of the same era, our iconic eateries were big-budget extravaganzas that tended (literally) toward the cheesy. Their emphasis was on sheer entertainment value, not historical accuracy or nuance. Was the food in any way “authentic”? Today’s foodie would say no, but I say: absolutely. It was authentically Hollywood.

Today’s foodie-fied L.A. cuisine is more flavorful and varied, but there’s little that distinguishes its flagships–Osteria Mozza, Providence, or Urasawa, say–from restaurants in San Francisco, New York, or Tokyo. Sure, some of the old idols survive. You can still consume a “Tahitian Pastrami Sandwich” and a Mai-tai surrounded by fishtanks at Bahooka, and Ricky’s Fish Tacos hasn’t sent El Coyote’s parrots packing. But Yelpers seem to have a zero-tolerance policy toward Thousand Island dressing, and the dinosaurs are on the decline. Even if some survive, the blockbuster Hollywood mojo that created them is lost. And that, foodies, is on you.

Jess Winfield is a writer, producer, and author of, most recently, My Name is Will: A Novel of Sex, Drug, and Shakespeare. He blogs about food at L.A. Food Crazy.

We Should Miss Mushy Veggies

What I miss most are vegetables cooked to melting tenderness. I like crispness as much as the next person–there’s nothing like a satisfying crunch in the mouth. But the foodie insistence on barely cooked vegetables leaves me, like the veggies, cold. Worst of all are the nearly raw green beans that are ubiquitous in restaurants with high aspirations. These beans may look bright and appealing on the plate, but they need cooking to eliminate their basic vegetal taste and bring out their natural sugar.

When beans are really fresh, in the summer, I’m all for crisp-cooking them, but when eating out I hate having to wield a steak knife on them. What I long for are comfort beans to warm the soul, the kind most restaurants wouldn’t be caught dead serving these days: green beans cooked southern-style for hours in a cast-iron skillet or pot, with a ham hock or bacon. You can cook them dry in a skillet or simmer them in water, but slow-cooked country beans need a good three hours to develop deep flavor and a soft texture, so soft they really do melt in your mouth.

Darra Goldstein is the founding editor and editor in chief of Gastronomica: The Journal of Food and Culture. For more information visit www.darragoldstein.com.

“Pre-foodie culture?” Is that supposed to mean we’re in a foodie culture now?
You say “salad meant jello,” but Native Americans and the Chinese who built our railroads never used those terms. The Spanish, Dutch, and English landed on the East Coast but it took a while to get west. (As colonial communities and civilizations took over civilizations and communities that were living from the earth, they found themselves trying to fill a void that their ancestors destroyed.)

If you are talking about Western foodie culture, we should realize that the Russians had a lot to do with the way we eat. That’s because we learned about the modern restaurant from the French, but the French in turn had learned from the Russians. The French, as amazing as they are, used to eat everything at once. Full, elaborate platters of food got plopped down on a massive table and everyone went to town. Then Antoine Careme, one of France’s pioneers of haute cuisine, adopted the Russian technique of serving courses one at a time.

The next step was the codification of recipes by Auguste Escoffier.

So when did salad become Jello?

First, gelatin is actually a meat from an animal. Molds for jellies date back centuries in England, before the edible green even became an option. When we started referring to Jello as salads few of us even understood we were eating meat.

What is “foodie culture” anyway? Is it what started in the early 70s in Berkeley, Ca? Or is it living off of the land like the farmers in New England, the Carolinas, Tennessee, Pennsylvania, upstate New York, and Ohio, where families ate what they sowed? What about the Creole in the Bayou, as descendants of slaves mixed with the French to create a true regional cuisine?

To really be a foodie is to believe food can never be forced into a labeled way of living. I reject the idea that we’ve moved to a post state from a pre state. We are in no state.

But the question was: what do I miss?

I really miss the old dining cars of the early 20th Century, if you really want to know.

Roy Choi, godfather of the food truck movement, is also the founder of the restaurants Chego (in Palms), A-Frame ( in Culver City), and Sunny Spot (in Venice).

We Should Miss Not Caring About Food

Foodie culture has caused Americans to think much more deeply about food–its origins, its social dimensions, its production, and its preparation in the kitchen. Part of what we’ve lost as a result is the liberty not to think about it. Food consumption used to be central to our days but simultaneously beneath our radar. People didn’t know why they loved Kraft Macaroni and Cheese or Dunkin’ Donuts coffee. Those things were just the familiar and unexamined fabric of their existence.

But the foodie vision reaches beyond the dining room and enters into politics and views of materiality. It requires education and judgments about what food habits are desirable and undesirable–or acceptable and unacceptable. It’s a worldview that lays claim to a political, even moral, high ground. Inevitably, it alienates those Americans who couldn’t care less about the life their hamburger led or the labor system that produced their Snickers. If something has been lost in foodie culture, it is food’s apolitical innocence.

Paul Mullins is Professor in the Department of Anthropology at Indiana University-Purdue University, Indianapolis, President of the Society for Historical Archaeology, and author of books including Glazed America: A History of the Doughnut (2008) and The Archaeology of Consumer Culture (2011).

We Should Miss Clean, Fresh Food

This question implies that in the past food was terrible but now it’s fantastic. Not everyone ate Jello salad, and in many ways the food available to most people has deteriorated. Sure, there are upscale restaurants and foodie delicacies for those with money, but the prevalence of junk food, fast food, and convenience food suggests that most of us are eating even worse than our forebears did.

What we should be saddest to have lost is good, clean, fresh food–with whole ingredients, and not genetically modified or packed with flavor-enhancing chemicals–that people actually had to cook. Raw ingredients and the skills to cook them have been disappearing in the past decades. People cook less because the food industry has convinced them that cooking is a nasty chore that corporations should do for us. Advertisers say, “Who has time to cook?” Well, everyone should make the time. Go back another generation, before the 50s, and look for a good pot roast, a pot of simmering greens, real mashed potatoes–food that people actually had to cook at home without shortcuts or anything to compromise good, honest taste.

Ken Albala is professor of history and co-author of The Lost Art of Real Cooking and forthcoming The Lost Arts of Hearth and Home.

We Should Miss Less Than You Fear

The culture of food is ever-changing. I’m not so sure that it’s food that shifts or our take on it. We may think we’re so much more evolved now, but snicker not! I guarantee that what is new and exciting today will produce eye rolling and laughter tomorrow.

I recently received a book called Menu Design in America. It’s a collection of restaurant menus from the past 135 years. Some of the menus were so preposterous (naked women everywhere) or clichéd (fillets of Boston Sole Belle Meuniere, Cotes de Porc with a Béarnaise sauce) I had to laugh. Then, mid-chuckle, I realized that everything I was laughing at I’d considered current and important 30 years ago while in cooking school.

Some of the old “bad” food I sort of miss. I mourn the passing of my mom’s Velveeta cheese dreams, her Wonder Bread toast with peanut butter, chutney, and Baco-Bits, and her icebox cakes with lady fingers. But I have a sneaking suspicion they’re not really gone. I think, with some updates, they’ll cycle back around in time for another curtain call. Don’t believe me? The “new” hot drink sweeping the country is Pabst Blue Ribbon with a shot of Jameson.