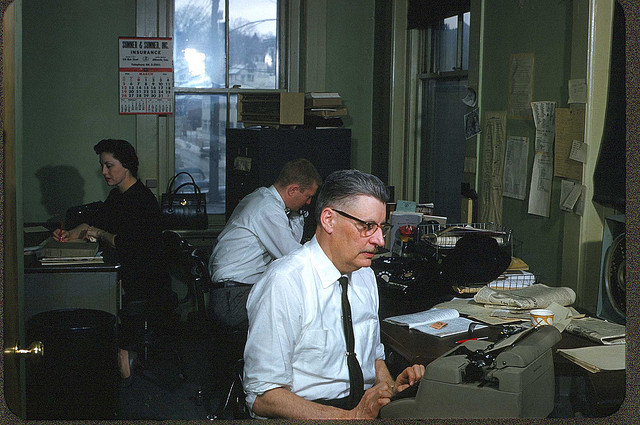 The Artist, a movie about a silent-film star facing the advent of the talkies, won Best Picture at Sunday’s Academy Awards and has captured the hearts of moviegoers with its black-and-white glamor, infectious dance steps, and silent-movie simplicity.

But the movie also tells a rougher, contemporary story. The debonair lead character does not see silent movies as charming or retro. Silent movies were his medium, his profession, even his life. So he suffers a reversal of fortune, losing his mansion and all that went with it.

In the film, the actor’s colleagues and fans expect him to adapt to the changed workplace climate and even be excited about it. Just as those of us who created what is now called content were supposed to be excited about the coming of the Internet in the late 1990s.

Yes, I knew the crisis of the Artist. Only difference: I lost a noisy world, the cacophony of a big city newsroom, and saw it fade into the sound of silence. I am far from alone: a large swath of newspaper writers crossed the bridge like soldiers into the ether. And some of us look back across that bridge and sigh for the good old days–but, hey, they weren’t so long ago, and we’re not that old.

Change came quietly while we were going about our daily deadlines, filing stories on cops, courts, and City Hall–“the Hall,” as the editors called it. And then one day there was Google, stealing into the old Baltimore Sun newsroom–a beautiful place, every messy desk with papers at once strewn and somehow perfectly in place. The stories of the city were contained within those newsroom piles, as if in archaeological layers.

The obituary desk looked much as it did in H.L. Mencken’s time, with the social tribes of the city all diagrammed in the master writer’s head. Baltimore has a long memory. The Great Fire of 1904 felt like yesterday. Memorial Stadium, though shuttered and scheduled for demolition, was still swimming in memories of Johnny Unitas and the Colts. The ethnic enclaves in Baltimore alone were like an atlas.

In my 10 years there, after being acquired by Chicago’s Tribune Company, the Sun fell from winning Pulitzer Prizes to closing every foreign outpost-London, Jerusalem, Beijing, Johannesburg, and Moscow. Cuts, performance reviews, and buy-outs were the language of the new faces, who did not seem to know our names. One bright, frigid morning, while working with a photographer on the street where F. Scott Fitzgerald had lived, I learned that we’d lost the old-school editor and prize-winning newspaperman who hired and mentored many of us. I felt like reaching for the smelling salts, but by then they’d gone the way of the printing press.

I left the Sun in a wordless desperation similar to the Artist’s. I had some buy-out money to tide me over. Just as the Artist learned that the other studios were making talkies, too, I saw that other papers were adjusting to smaller staffs and reduced readership. If younger people read our work at all, it was online. Vital signs were weak. Today, the proud Philadelphia Inquirer is on the auction block and leaving its signature building.

So what choice did I have?

Like a butler after the Great War ended the habit of dressing for dinner, like a candlemaker after the light bulb lit the scene, I had to take stock of my “transferable skills.” This moment of truth tested my goal in life: to be a columnist. The only way forward was for me to write on the Internet. And the Artist finally accepted, after a suicidal descent, that talkies were here to stay. The way of the world changed his life, as it did mine.

I wrote my first blog post for the Huffington Post in the 2008 campaign season. My debut: “Hillary Clinton & Barack Obama: Prose and Poetry.” It was a nice piece of work while it was up. The consequences of working for free had not sunk in. (Thanks, Arianna!) Dozens of pieces later, several for the BBC News website, I had the strange sensation of writing the freshest takes of my life yet feeling like a journeywoman. BBC News was a paying customer, for which I was deeply grateful. The New York Times published four Civil War pieces-online, but, hey, it was still the Gray Lady.

Transplanted, I made my new apartment in Washington (where the Capitol sparkles in the distance) my workshop. At first, as my own assignment editor, I thrived on the oxygen. Then I tried not to get demoralized, living on air. I felt blue more than I cared to admit, even to myself. All I had to hold onto was my core optimism.

Beyond finances, there were other costs. You lose the sense of being on a big ship, with fellow travelers keeping watch on what is really happening out there. You miss going out to see the world, whether it’s a community meeting to save the branch library or a homicide detective as he canvasses people sitting out on the marble steps of their rowhouses. Inside the newsroom, you lose the sound of the police scanner, the former Moscow correspondent speaking Russian on the phone to a spook, the classical music critic whose psychiatrist just died. Something as small as a bet on who could get the word “crepuscular” in the paper first actually stands out–maybe because I won the $5 with a line about the dawn’s early light in Francis Scott Key’s first stanza of “The Star-Spangled Banner.” It was the first homage to the city in popular American culture.

For journalists like me who work online at home, all of the easy banter is gone. I miss getting edited at the end of the day by an editor. The old newspaper editors exist today only in fiction; one of my Sun editors played himself in episodes of The Wire.

Once I served a community of readers while working within a community of writers. Now I am isolated. The Internet is a lonely workplace. And for those who still work in big-city newsrooms, the sound of the old music is fading. The aural landscape is artificially hushed, by e-mails and earplugs, as dull as the green on the walls of the “new” Sun newsroom, where we had to move about the time Chicago came calling. Missing is the old hum, a vibe larger than the sum of its parts.

The Artist had a happy ending. And my story has a happy beginning: how delighted I am to launch a syndicated column next month, with Creators Syndicate. Somehow my hard work writing online took me to this moment, connected to newspapers again, though not as I had dreamt it.

More commentary from Jamie Stiehm, a Santa Monica native, can be found at Creators.com. Her column at Creators Syndicate will launch in early March.