I asked Brian about a series of video portraits currently on view in his exhibition “Under Performing” at Cherry and Martin in Los Angeles. The show runs through February 25, 2012.

Q. A portrait is typically drawn, painted, or photographed. Can you talk about the connections between these media and your approach to video?

A. My undergrad was in film and video, and my grad was in painting. So I got to grad school and was expected to be making paintings. But I would look around my studio, and there were all these things that were way more interesting than what I was painting. So I’d put objects on top of them and in front of them, and then I would set up these tableaux that were highly stylized with found objects, wallpaper backgrounds, whatever. I realize now what I was trying to do was to really interact with my paintings. These videos are a natural progression from that kind of thinking. 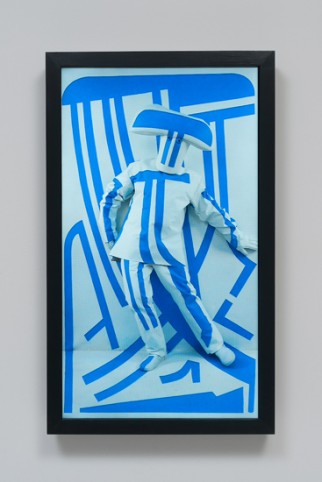 Q. Where do you start?

A. All I know is I that need to follow an image. Usually they start with drawings, collages, or direct references to abstractions that I’ve seen in everyday life. For example, the edge of a plate in my kitchen had a particular stripe pattern that then reminded me of Russian Constructivism. But here, instead of working more directly with found materials, I’m often trying to recreate their effects. It’s become important to untether myself from the original objects and get a sense of a world not quite directly related to ours. I think that creates a more holistic and immersive environment. In another example, “Cowboy” came out of a little sketch. Ever since I was a kid I’ve been doodling, and so I wanted to make that the basis of a thing that evolves. What would happen if he came to life? 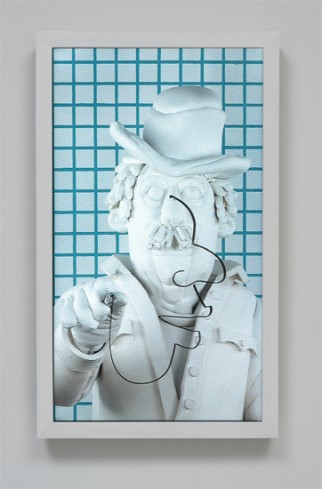 Q. Then he must have needed something to do. How are you thinking about time as you’ve moved from working with still to moving imagery?

A. Which is very much like how we experience life, no? I really like that the characters exist first and then need to find something to do. I wanted the videos to operate the way a painting unfolds over time. I didn’t intend for them to be experienced chronologically from start to finish. That cowboy piece is 32 minutes long, and it was actually important it was that long, so that eventually you’d have to look away. If you lived with him, you might be drinking tea, and you’d look over, and see the cowboy drawing one thing. Then four months later, you might be talking to a friend on the phone, and you’d look over and he’d be drawing something totally different! So the duration of the video also makes the viewing experience into a mishmash.

Q. The subjects are so often trying to camouflage themselves away.

A. I love camouflage in nature. I watch this TED conference video of octopi changing color all the time. I go to the camouflage because I guess I don’t think there are accidents in life. This character belongs in his image and is really trying to fit in and also project an image outward at the same time. 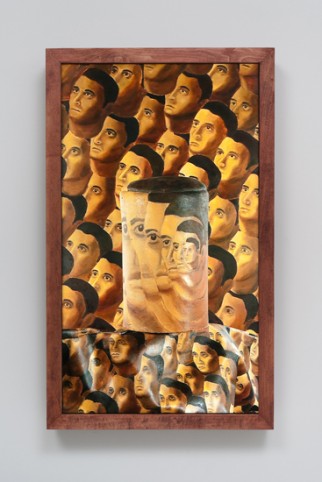 Q. I also like the meaning. The subject is always falling apart on us. That theme seems to drive much of the humor in the work.

A. Yeah, failure is funny, the lack of a direct purpose. The construction is also humorous. For example with “Relatives,” seeing people in the water, and understanding that it’s not CGI, and thinking about how someone went to all the trouble of doing this. 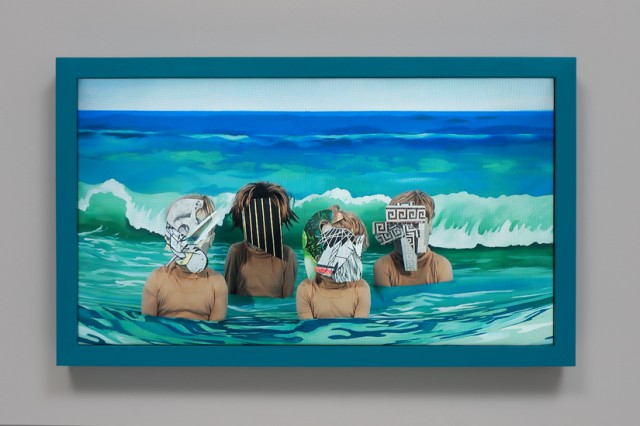 Q. It was interesting that the humor didn’t limit other responses. The work is also sad and lonely and haunting.

A. I think a little bit of being green in my earlier work was wanting to elicit a laugh. It’s an affirmation. But in a lot of ways that comic moment can be a cul de sac. I think you’re right that this quieter, maybe underperforming humor lets other emotions enter in.

Q. Formalism has been accused of a lot of things–being decorative, elitist, etc. You’ve referred to it here as a kind of tool for connectivity. Can you talk a bit more about that?

A. Formalism is a huge part of it all for me. I mean, I make images. And ultimately that’s how they happen. The formal element is what drives people to come closer to something, and that connection really matters to me.

Q. Do you miss painting?

A. Yes. No. I miss presenting paintings as objects. And I miss people getting close to those objects. I’m using video as a mediation of the experience of painting. That’s not just for the viewer but also for me. But I really thrive off that tension. This process seems really freeing to me because I’m not beholden to any one ideology–I can wander from abstractions to rendering–and it’s fine because they are just backdrops. I really think there are so many valid ways to make an image.

Q. There’s clearly a strong awareness of art history in your work, but it doesn’t feel referential to me, or like a critique.

A. That’s good. I mean it isn’t ironic. My love of these things is sincere. Either there’s love there or there isn’t, and people can tell the difference. I love art, but my conversation isn’t with other art as much as with things in the world, like that plate in my kitchen or children’s television. Everything comes into the studio with me: insecurities, the content of my life, it all figures its way in.

Stephanie Washburn is an artist based in Ojai and Los Angeles and a lecturer in the Department of Art and UC Santa Barbara.