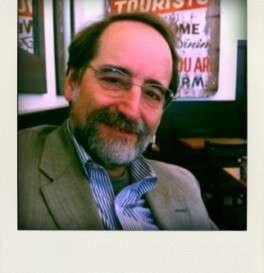 In his 1998 New Yorker essay “L.A. Glows,” Lawrence Weschler famously wrote about the light of Southern California, describing how, while watching the O.J. Simpson car chase on TV, he found himself in tears, not because of the crime itself but because he so missed the airy, hazy light of home.

Born and raised in Van Nuys, the oldest of four children, he has lived in New York since 1980, while taking extended side trips around the world as a reporter. Being gone from L.A. means that he hasn’t “felt at home in 30 years.”

“I’m a fraud in everything I do,” he says cheerfully over a latte at Black Cat Bakery & Café on Fairfax, a bustling, noisy spot around the corner from LACMA. “And that’s, I think, why people like the books I write. I come at it fresh.”

The subjects of Weschler’s books-he’s published 14 over the past three decades-are as wide-ranging as the Museum of Jurassic Technology in Culver City, the artist Robert Irwin, torture in South America, and political change in Poland. Weschler, who goes by Ren and is currently the director of the New York Institute for the Humanities at NYU, is in town for an event on L.A. literary history at the Central Library.

An avuncular, sparkling-eyed presence in wire-rimmed glasses, beard, and sport coat, Weschler is a tireless proponent of his many enthusiasms. There is no topic on which he does not have a book to recommend. He’s currently worked up about The Lifespan of a Fact-a collaboration between a writer and his fact-checker that’s caused a tempest in the world of narrative journalism by questioning the very possibility of reported truth.

Weschler lands squarely on the side that believes even nonfiction is invented through the lens of a writer’s subjective impressions of the world. At the start of our conversation he pulls the book excitedly out of his backpack, and then produces a notebook in which he has pasted quotations from well-known writers that support his point. Janet Malcolm, he notes, said in The Silent Woman that the only unmediated accounts can be found “in fiction, where the author is reporting on his own imagination.” Every writer, Weschler contends-novelist, journalist, or those who fall somewhere in between-constructs a story about the world.

His own story is one of travel and exile. His grandparents were Jewish emigrés from Europe. Weschler’s father, who died in a car accident when Weschler was 10, was an industrial psychologist. As part of a group at UCLA business school, his father came up with the earliest version of “sensitivity training,” a way to depoliticize workplace conflict in the 1950s that would later transmogrify into touchy-feely, California-based trends like Esalen and EST. When his parents squabbled, Weschler remembers, his mother would scowl, “You have a lot of nerve to say you can train people in sensitivity!”

The landscape of Los Angeles continues to exert a special hold on him. In a conversational stream that includes quotes in French and German, references to Talleyrand and Wittgenstein and the TV show 24 (“it legitimized torture and made a black president possible”) amid a critique of the Occupy movement and a dark vision of a President Santorum, Weschler repeatedly pauses to gaze outside at a majestic sycamore spilling out over the sidewalk and say, “I mean … that tree.”

The tree doesn’t so much interrupt as punctuate Weschler’s train of thought; for him, digression is part of the package and may indeed be the point. In a world of sound bites and arguments reducible to 140 characters, Weschler’s writing and his conversational style both insist that the journey is the destination. As a result of this wandering, he often sees connections that wouldn’t be apparent to the rest of us. His 2006 book Everything That Rises (subtitled, “A Book of Convergences”) presents sets of linked images in which he finds correspondences across time and place. He’s not presenting a historical argument about pictures that look alike; instead, he’s after what he calls a “unified field theory of cultural transmission.”

His most recent book, The Uncanny Valley, collects his nonfiction pieces from the last 15 years. In the title essay, he discusses computer animation and the theory of the uncanny valley-the notion that while we like robots who imitate human behavior (like the main character in WALL-E), when artificial humans look and act too much like real human beings, it provokes a feeling of revulsion in us. Represented on a graph, the uncanny valley is a dip in positive reactions to human-like robots, and thus something computer animators try to avoid.

It’s a reasonably apt way of thinking about Weschler’s own approach, which is to get close to his subjects-but not too close. He’ll spend a lot of time conjuring up the world of an artist, for example, but never so exhaustively or analytically that there’s no mystery or wonder left for the reader.

Weschler’s Los Angeles is the exile’s romantic vision of home. He waxes euphoric about the joys of cruising around the city in the ’50s and ’60s, when freeways were emptier and easier, and listening to the radio. In the old days, he remembers, you could hit Santa Monica and downtown and Glendale and back in one day without too much trouble. We both pause to consider the nightmarish prospect of covering all that ground in the city today.

If it all sounds a little nostalgic, Weschler’s aware of that. He tells a story about David Hockney returning to London and missing his home here, on Mulholland Drive. Hockney painted a picture of the house from memory, dense with ultra-vivid Los Angeles colors. But when he came back to California, the house wasn’t nearly as bright as he’d remembered it. So he changed the house to resemble the picture, painting vivid blue and green walls, even saturating the bricks around the pool to a deeper red.

It’s the consummate Weschler story, about the convergence between art and life, and about the fluid, circular relationship between reality and the stories we tell ourselves of home.

“And by the way,” Weschler adds as he finishes the anecdote, “can you believe the mountains today?”

The question is whether a mind as meandering as Weschler’s can speak to a contemporary audience that expects writers to cut to the chase. Toward the end of our time together, he grows melancholy on the subject of the printed word-the waning fate of books and newspapers in general, his own work in particular. The last book he published was not as widely reviewed as he would have liked. There’s less and less space devoted to book coverage, and specialized art publications don’t seem to embrace his idiosyncratic worldview.

“In some ways,” Weschler says wistfully, “I’m recapitulating my grandfather’s career.” His mother’s father, Ernst Toch, left Vienna in the 1930s as a successful modernist composer only to find that there was little American appetite for his music. He grew massively frustrated, creatively blocked, and almost died of a heart attack. After he recovered, he turned inward, composing work to please himself, with less and less thought of audience. One of Weschler’s projects, through writing about his grandfather and speaking to opera companies about him, has been to revive his work.

Before we leave the cafe, I think about how Ernst Toch is described at the end of “L.A. Glows.” When someone asks him if he composes while looking at the gorgeous L.A. light, Toch says no: “I have to close the curtains.”

But today the curtains will stay open. Weschler has regained his sunny mood before getting back into his borrowed car with fuzzy seat covers and a broken window. He’s got an array of appointments lined up around town-friends, curators. He rolls down the unbroken window and breathes deeply. There’s a lot of light left in the day.