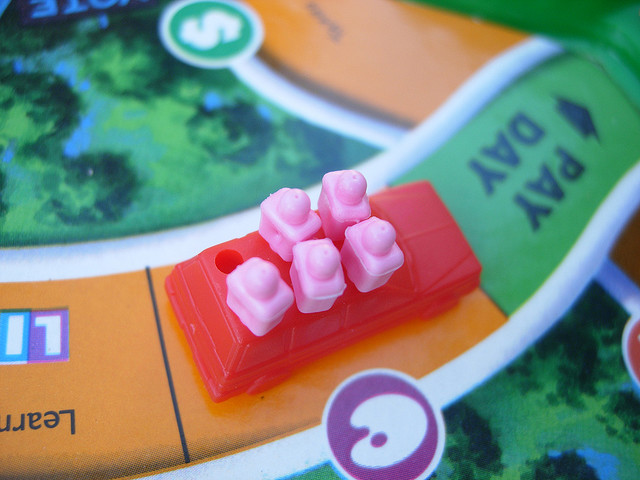 I have grown up with two near-religious beliefs: there is no career that a woman cannot do as well or better than a man, and there is nothing but my own self-doubt stopping me from becoming the next Hillary Clinton. My mom is a partner at a large Chicago law firm, and my dad is a successful executive. Both graduated from college in the 1970s, at the height of the women’s movement. When I recently called my mom in shock after reading in Gail Collins’ When Everything Changed about men-only executive flights and law school quotas on women, she does not say, “The feminists changed all that.” She says, “We changed all that.”

In short, my mom’s generation had fought the fight for gender equality, much like that other generation fought World War II. I figured that was the stuff of tidy history: injustice begets suffering; suffering begets struggle; victory is ultimately attained; a just peace ensues. Carry on, and give me my paycheck. My mom’s generation has brought us to a historical moment when more women are earning college degrees than men, the wage gap is the smallest it has ever been, and 71 percent of mothers with children under 18 are in the workforce. My mom’s generation paved the way and left it to my generation to carry the final leg of the relay, a victory lap, really–to work our way up the career ladder and to achieve gender parity in the workforce.

But now that I have joined the real world of the workforce and find myself researching some of these subjects on the job, I have lost my previous complacency. There is a great deal of passiveness about the parity endgame; passiveness among women, even, about whether to close the deal. Linda Babcock, an economist at Carnegie Mellon University, has published studies on compensation negotiations that show women are far less likely to ask for a raise than men are. And Catalyst, a consulting firm, has issued a report revealing that it goes worse for women than men when they do ask.

Even in Washington, D.C.–a city with one of the smallest wage gaps in the country and one of the highest concentrations of educated women–there are lingering signs that the old boys’ club is alive and well. The men striding down K Street in suits still exude a confidence that women do not. And Babcock’s analysis does, unfortunately, apply to me: I accepted without question the starting salary offered to me when I moved to D.C. and the modest merit raise offered to me one year in, and I have not asked for a raise since. And it is not because I am lavishly paid.

Hoping to attribute my own reluctance to negotiate to the mere two years of work experience under my belt, I checked in with accomplished professional women in Washington who had been at it a while longer. I interviewed litigators, journalists, corporate execs, editors, consultants, charter school administrators, and government officials, and I came away from my interviews deflated: women are indeed reluctant to ask for pay raises.

But I also came away encouraged. Babcock may be right about pay, but her studies fail to acknowledge a related phenomenon: women who are negotiating, just not for money. Instead of asking for raises, these women are asking for part-time status, flexible schedules, and permission to telecommute. Although their approaches differ, these women are likewise seeking success and challenging restrictive workforce norms. As difficult as it may be for the more focused feminist advocates to admit, these women, too, are carrying on the fight that my mom’s generation started.

The freedom to chart one’s own course and bend the workplace to accommodate a woman’s needs is as significant an accomplishment as formal parity. As Danna Greenberg and Elaine Landry write in their 2011 study on negotiating a flexible work arrangement, “the context of the ideal worker continues to serve as a backdrop to most American organizations and flexible work arrangements represent a direct violation to this gendered work norm.”

Julie Barnes, the director of Health Policy at the Bipartisan Policy Center and a former litigator at Crowell & Moring, explained that it is “a form of ambition to say, ‘Thanks very much, I decline your significant pile of money. I’d rather go home and see how my kid did on his math test.’”

Then there is Bethany Little. When she started a new job at the Alliance for Excellent Education, she was prepared to negotiate. However, it was not money she was after. It was time. They offered her a salary slightly lower than she’d anticipated, though she wasn’t unhappy. As she recounted in an interview, “I said, ‘I’ll take that salary for one day a week working from home, and three months into the job I want a review on my title.’” Three months later, Little got the title promotion. And, rather than asking for a salary increase to match the new title, Little, who had a six-month son at home, used her bargaining power to request more time. “I’ll keep the job, and I’ll keep the workload,” she told her employers. “But I want Fridays off. I think I can [still] get the job done.”

Little was brave in choosing to negotiate for time. As Greenberg and Landry point out, even in offices that technically have work-life policies in place, often the culture still indicates that taking advantage of them is not advisable for anyone aspiring to rise within the organization. That was the concern of Janet Lambert, vice president of government relations at Life Technologies, a biotech company. She asked to cut back her hours last January, but she secretly worried that her boss might say that she wasn’t committed and did not deserve to keep her job at all. “I feel sometimes like I’m rocking the boat by asking for an alternative schedule,” she explains, “and it makes me more hesitant to rock the boat in pushing for other things like a raise.”

Greenberg and Landry explain that “when women perceive a lack of work-life support” they tend to make concessions and ask “for less than they desire” or deserve. A healthcare consultant I spoke with, who asked that her name not be disclosed, admitted that she did not ask for a raise for nine years because she instead asked for part-time status. “I went part-time so I could be at home with kids,” she told me. “So my sense of worth and how much I should be paid was tied to my awareness that I’m not at work as much as other people and feeling like I shouldn’t ask for more.”

In part, this healthcare consultant shared what Lambert described as an “exaggerated notion of risk.” When she finally asked for a raise last year, her boss not only granted it but also offered to have her come back full-time and to take a major promotion. She is now the only woman at the highest management level of her company. Clearly, she was worth more to her company than she had thought.

Still, balancing negotiations for flexibility with those for a promotion is a delicate, often intimidating, art. This is particularly true if women seek a meaningful break. “[T]hough the overwhelming majority of off-ramped women have every intention of returning to the workforce,” writes Sylvia Ann Hewlett in Off-ramps and On-ramps: Keeping Talented Women on the Road to Success, “only 74 percent manage to do so. And among these, only 40 percent return to full-time mainstream jobs.”

In some careers, moving in and out of the workforce without falling irreparably behind is impossible. One Washington litigator I spoke with suffered a blow to her corporate law career after temporarily leaving her law firm for a government job in the Obama White House. Although she felt she deserved to re-enter a law firm at the partner level, she had to settle for an associate position with lower pay and less prestige. Eventually, after 17 months on the job, she made partner. If that’s the sort of setback to expect after a prestigious stint at the White House, just imagine the obstacles to partnership for an attorney who takes a break from the workforce altogether.

One prominent Washington-based magazine editor warned against making premature career tradeoffs and over-internalizing the “anxiety literature” about work-life balance. She lamented the fact that women in media often begin to pull back from their careers before they really have to, “when it is still an abstract choice.” The result is a gap that begins to pull the careers of male and female journalists apart. As she put it, “If you say you’re not going to do these jobs or I’m going to de facto, slowly, start to opt out at 30, obviously you’re not going to be in the same place at 40.” Her advice to journalists seems applicable to all the fields I investigated. If you need to cut back, do so. But don’t get bogged down in the “‘you-can’t-have-it-all’ mentality.”

Motherhood remains a distant abstraction in my life, but I see it shaping women’s career paths in ways we don’t always acknowledge. I am heading off to law school this fall, grateful that so many women older than me have been striving for more balance, challenging conventional workforce expectations. It is a more nuanced and complicated struggle than the frontal conflict for parity, one in which victory becomes harder to define and recognize. But as society becomes more flexible about allowing women to balance their domestic lives with a rewarding career, that’s a victory that will make a enormous difference in my life. The alternative to women having it all, which is what the old mantra encourages us to embrace, shouldn’t be having nothing at all. It should be having the best mix of personal and professional endeavors, regardless of one’s gender.

That said, in the meantime, I might practice my own negotiating skills. Seeing as how I am heading out in the fall anyway, I might as well go ask for a raise, see how it goes. Wish me luck.

Caroline Esser is a program associate at The New America Foundation in Washington, where she worked as a researcher for Liza Mundy’s book The Richer Sex: How the new majority of female breadwinners is transforming sex, love and family.