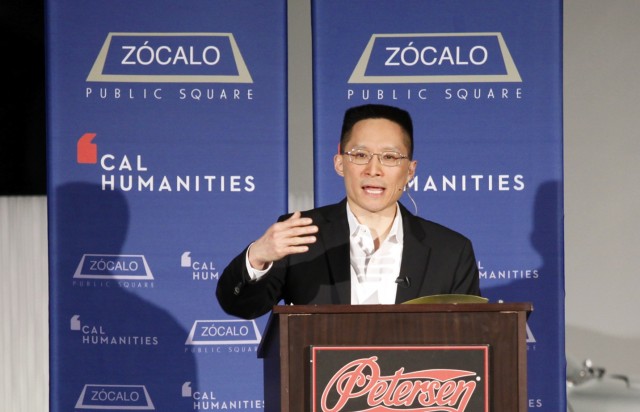 At the launch of the Zócalo Public Square/Cal Humanities “Searching for Democracy” series, author, civic entrepreneur, and former Clinton speechwriter Eric Liu, a fellow at the Center for Social Cohesion, asked the audience to consider an issue that pervades all aspects of American life: citizenship. It’s one that cuts across political belief, class, and geography, but “most of us, most of the time, don’t think or talk about” it.

American conversations about citizenship–what the fathers of the nation and the framers of the Constitution fought for–are thin and polarized. The left speaks of global citizenship; the right talks about exclusion.

Flipping these conventions on their head, Liu instead asked a crowd at the Petersen Automotive Museum to participate in a thought experiment: What if we repealed the 14th Amendment, and no one could become a citizen because of birth alone? “What if every single one of us today had to earn our citizenship in some form or fashion?” asked Liu. 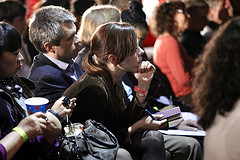 Although he’s asking for an act of imagination rather than a change in policy, Liu still finds that this suggestion provokes anger, outrage, and defensiveness–a response he finds all too telling. Most Americans take for granted “every single aspect” of the privilege of living in the United States, he said.

“We need to have a new movement in this country to Americanize Americans,” said Liu. The movement would be devoted to “re-instilling in all of us an appreciation of the values that constitute American identity.” His proposition consists of three parts: creed, character, and culture.

America has a civic religion, said Liu, but we don’t do a good job of passing this creed on from generation to generation. “This country has failed, over and over again, to live up to their creed,” he said–but that’s also part of what makes us an exceptional nation. “We measure our worth by how much closer we’re moving ourselves toward that creed,” and how well we close the gap between creed and deed. In order to continue to close that gap, we need to better educate children in civics, and hew closer to the original goal of public education: to make not good workers or good consumers but good citizens. 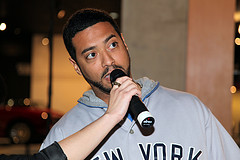 “Character does count,” said Liu–not just on an individual level but civic character in the collective. “Society becomes how you behave,” he said. Americans tend to believe that as long as we do no harm to others we’re free to do whatever we want. But our way of life is much more ecosystemic than that. “When I am courteous, society becomes courteous,” he said. “When I’m compassionate, society becomes compassionate.” Rugged individualism is not how America has gotten things done, said Liu, and not having an opinion is a powerful form of participation that can have the same effect as actively working toward something.

America’s culture has become increasingly fragmented. “We don’t have a story of self here as much as we have a Twitter feed,” said Liu. Americans need to embrace their capacity for imagination and creativity and embrace their civic inheritance–even if that inheritance is one that comes from a discriminatory place. “Nothing stops us from taking our inheritance and reclaiming it, no matter how white or crusty,” he said. “That’s the point of being American: I reclaim. I remix. I redeem.”

Liu admitted that his ideas cause discomfort for both the right and the left. The right assumes that liberals hate America; the left hears talk about loving one’s country and equates it with right wing invective. “We have to get over this” is my message to both right and left, said Liu. This is a nation with a common destiny, and all Americans–documented and undocumented, immigrants or native-born–should pledge to keep it on the path to that destiny. 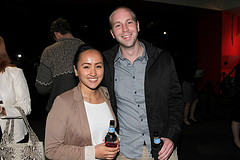 In the question-and-answer session, an audience member who identified himself as an “outsider looking in” asked what Liu thinks it means that most Americans prefer the symbols of citizenship to the real thing. Liu said he was challenging Americans to embody a nationalist spirit “in deeds and not only in words.” In response to a question about the relationship between voting and citizenship, Liu agreed that voting is a very tangible part of the duties of a citizen–but that it’s not synonymous with citizenship. “We like to think of citizenship as a cornucopia of rights. But responsibility and rights need to go together,” he said.

Education is one key to reinvigorating the national conversation about citizenship, said Liu. He believes that the federal government should fund some nationally uniform civic education. But Liu also urged the audience to be more mindful about civic identity. If we as individuals start new conversations with those around us, we can affect the larger discussion. “Behavior is contagious,” he said.

Part of the reason civic education has stalled is that it touches on inherent tensions. “We have to teach the tension,” and even embrace it, said Liu. American life is a tension between freedom and equality–between celebrating the creed and becoming jingoistic, between patriotism and raw nationalism.

“If you truly love your country, it must mean you believe in mutuality, that we’re all in it together, in service, in sacrifice,” concluded Liu. Unpacking the values and content of patriotism–and other universal beliefs–“is a powerful way to start conversations that cross the divide between left and right.” 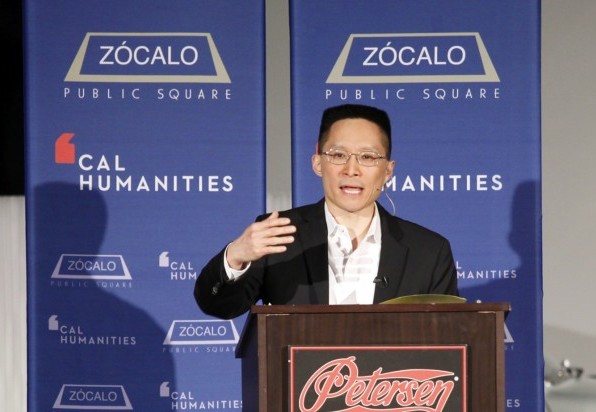