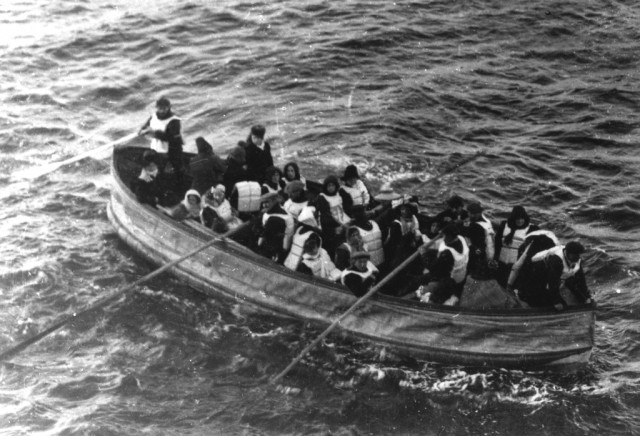 J. Bruce Ismay, chairman of the White Star Line, the company that built the Titanic, died on the night that his ship hit the iceberg, April 14, 1912. He died again in his bedroom 25 years later. From the moment he jumped into a lifeboat along with the women and children, leaving 1,500 passengers behind to perish in the icy Atlantic, Ismay’s was a posthumous existence. His honor went down with the ship.

The details of the wreck were slow to filter through to the press offices. “Titanic Sinks Four Hours After Hitting an Iceberg: 886 Rescued By Carpathia; Probably 1,250 Perish, Ismay Safe,” ran the lead headline of The New York Times on April 16. In reality, only about 700 survivors were rescued by the Carpathia, while nearer to 1,500 perished. But Ismay was alive. “He crawls through unspeakable disgrace to his own safety,” wrote the New York American. The British working-man’s paper, John Bull, addressed Ismay directly: “You were the only person on board who, as chairman of the White Star Line, had a large pecuniary interest in the voyage, and your place was at the Captain’s side till every man, woman and child was safely off the ship.”

Many Titanic survivors felt an overwhelming need to tell their tales, to turn the chaos into words, precisely because, as the second-class passenger Lawrence Beesley put it, the enormity of it all made “language … totally inadequate.” Ismay, however, never willingly spoke of the Titanic again. He gave no account of the sinking in writing, either publicly or privately. When asked by the U.S. and British inquiries into the Titanic to describe the part he played in determining her excessive speed (it was understood that Ismay controlled the captain), her inadequate number of lifeboats (it had been Ismay’s decision to keep the number to a minimum so as not to clutter the decks), and the circumstances that led to his leaving behind him a leaking vessel teeming with panicked passengers, he responded less like a Captain of Industry than a figure in an absurdist drama.

“There were no passengers there to take on,” he explained when asked about those left on board when he jumped into the lifeboat.

“I did not look to see,” he said when to describe the final moments of his ship.

“I have no idea,” he replied when questioned about the percentage of women and children who had survived.

“I really have not asked,” was his response to whether the wireless operators who had kept sending SOS messages until they were waist-high in water were now alive or dead. Ismay insisted throughout that he had been on board as an ordinary passenger and as such he had no idea why Captain Smith should have handed him an ice warning on the day of the wreck.

Back in England he received hate mail, his nightmares woke the house, he was blackballed from his club, and a close friend turned him away from the door. His wife decided that the name of the ship must never again be mentioned in his presence; she also decided, as they began the process of piecing their lives back together, that her husband had behaved impeccably. Both she and Ismay held firm to the belief that he was alive not because he took a scarce place in a lifeboat but because “God had willed it so.” It was the workings of Providence that Ismay had to thank, and not the abuse of power.

The man who had reigned over an empire of gargantuan liners never crossed the Atlantic again. His life, once lived on a grand scale, was now organized into small and manageable packages. Ismay looked for reduction rather than redemption as he undertook the daily business of beating back what Joseph Conrad called “the acute consciousness of lost honour.” He ate cold turkey breast every night. He caught the same train from London to Liverpool every Sunday and sat in the same compartment with the blinds drawn. (He kept his turkey supper in a hamper so that he could avoid the restaurant car.) When he went to a concert alone, he bought two tickets and placed his hat on the seat next to him. His wife, who had always been sociable, entertained her friends only when Ismay was away.

His self-pity was considerable. “The doctor tells me that the strain I have been through has affected my heart and it will be a long time until it recovers,” he wrote in one letter, lamenting that “any ambitions I had are entirely gone and my life’s work is ruined.” In another, he wrote, “I cannot feel I have done anything wrong and cannot blame myself for the disaster.”

Ismay confided these thoughts in letters to a Titanic survivor with whom he’d become infatuated. She was Marian Thayer, whose husband, John B. Thayer, had gone down with the ship and whose 17-year-old son, Jack, had survived by jumping into the sea and clinging to an upturned lifeboat. In his letters to Marian, Ismay circled around and around his fractured psyche like a goldfish in a bowl. “I am not in any way responsible for the truly dreadful disaster,” he wrote. “I had no more to do with it than you did.”

He wrote of being haunted. “The most difficult thing is taking an interest in my surroundings,” he wrote. “I cannot interest myself in anything. My mind refuses to retain anything except the recollection of that awful disaster.”

He lamented the end of his professional life. “I can never again take any interest in business and I never want to see a ship again,” he said. “What an ending to my life. Perhaps I was too proud of my ships and this is my punishment. If so it is a heavy one.”

And he pushed his luck. “I often think of where our friendship would have taken us if that awful disaster had not taken place, how well I remember our conversations when everything looked so bright,” he confessed. “You had a very peculiar attraction to me.” That’s when Marian Thayer stopped the correspondence.

For the next 25 years, Ismay carried on with his airless routines. He went to Ireland every summer for the fishing and to Scotland every Easter for the shooting. He shuttled between his home in London and his business interests in Liverpool, where he sat on various boards. He measured out his life with coffee spoons, believing himself the most misjudged man on earth. He kept secret the extent of his involvement in the Titanic’s flawed design and the speed of the ship, details of which are only now seeping out.

Cultural anthropologists often talk about guilt and shame. They distinguish between “guilt cultures” (like that of Western Europe), in which the individual judges himself, and “shame cultures” (like that of Japan), in which a man’s behavior is externally judged. Guilt results from a personal, usually secret, sense of lost honor; shame results from a failure to live up to the expectations of others. In our newspapers, we can read about the Ismays all around us: shamed public figures who are arrogant, unimaginative, ill-equipped for the positions they have been granted–and yet, as the sentencing judges so often say, “without remorse.” They may be incompetent Italian cruise ship captains, or neighborhood watchmen with guns, or drug-administering doctors with pop-star clients. It’s as if the opprobrium they experience lightens their internal load in exchange for a heavier external load. Perhaps Ismay, being shamed, felt exonerated from the obligation to feel guilt.

Near the end of his life, Ismay told his sister-in-law that he had not jumped voluntarily into a boat but had been ordered into one by Chief Officer Wilde, who said that Ismay’s evidence would be needed at the forthcoming inquiry. Perhaps this was true, perhaps not. Ismay died in 1937 after an amputation on his leg. Marian Thayer never remarried and spent the rest of her life trying to contact her husband in the spirit world. She died in her bed on April 14, 1944. Her son Jack cut his throat and wrists the following year. When shame didn’t intrude on the survivors, guilt did. No one really survived the Titanic.

Frances Wilson is a critic and biographer who lives in London. Her books include The Ballad of Dorothy Wordsworth (Farrar, Straus and Giroux) and How to Survive the Titanic: The Sinking of J. Bruce Ismay (HarperCollins).