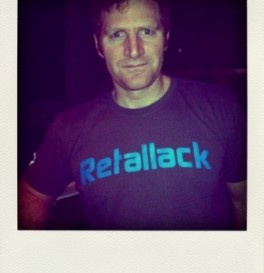 The 21st-century adman wears a t-shirt, drinks tequila, plays guitar, and checks into our drinks date on Foursquare as he takes a seat at the bar at Venice’s The Tasting Kitchen.

Deutsch LA Chief Digital Officer Winston Binch orders a Crazy Horse, and after he tells me “it may be the best tequila drink I’ve had, ever,” I order one too. (The off-menu combination of Serrano-infused tequila, grapefruit juice, and grenadine is indeed delicious.) When Binch says he was introduced to the drink by Deutsch CEO Mike Sheldon, I can’t help but think of Don Draper and Roger Sterling downing martinis at a dark bar in Midtown. (Even if he is wearing a t-shirt and not the dapper tailored suit I’d hoped for.)

“Don Draper’s got nothing on us,” Binch says of the challenges the adman (or adwoman) faces today. It’s the end of the evening, and by then three Crazy Horses have unleashed a little bravado.

Where Don and Roger are working at what Binch calls “the art of persuasion”-to convince viewers to make a purchase for what are often emotional, irrational reasons-today’s game is more complicated. Sure, you can still tug at heartstrings, as Binch’s firm did to such acclaim with its 2011 Super Bowl Darth Vader spot for Volkswagen. But today’s consumer is more jaded, more empowered with information, and more able to talk back. “People can go online after they see it and say that commercial is bullshit, that means nothing to me,” says Binch.

In our incessant, cluttered multimedia ecosystem, building and nurturing a brand is no longer a matter of putting up a clever TV ad and calling it a day. Today’s Don Drapers have to fret about whether their campaigns are going viral and whether the audience is engaging them on social media. In a sense, you now have to market marketing campaigns. This year, Volkswagen and Deutsch LA released a teaser for their new Super Bowl spot in advance. Yes, an ad for an ad. Maybe Binch’s job is harder than Don Draper’s.

Binch moved to Los Angeles last spring to lead the digital team at Deutsch LA after six years at Boulder-based Crispin Porter + Bogusky, the 13-time “Agency of the Year” that rose meteorically to the top of the industry in the late 1990s and early 2000s. As Binch tells it, he landed in the advertising world thanks to a happy accident of timing and talent. His genesis story seems to be that of the accidental advertiser, although his obvious enthusiasm for the gig belies any ambivalence he might express.

After graduating from college, Binch worked in film and television briefly, then played guitar in indie rock bands in New York at night while temping during the day. But just as Napster was coming onto the scene, he put aside his dreams of making music for a living and got a job at Sony Classical, where he helped drive the division’s digital marketing. This was just as the Internet was taking off-which meant “you got to write, you got to design, you got to code. We were making up the rules of the Web in real time.” He was hooked.

But the Internet that had created his job could also destroy it, and as Napster decimated the traditional music business, Binch witnessed “rounds and rounds of layoffs” at Sony before he too was left without a job. “It was kind of an exercise in watching an industry die,” he says. “And I got to see it firsthand.”

By 2003, the tech bubble had long since burst, but Binch had his heart set on a digital gig. He got a job producing sites for R/GA, a special effects production company that had pivoted toward digital marketing. It was, he felt, the best place for someone young and creative to work in New York at the time. A former college ice hockey player, Binch jumped at the chance to work on the Nike account, helping launch Nike ID (where you could custom-design sneakers online and in stores) as well as Nike Gridiron (football) and Nike Basketball. As we’re talking about his work with Nike, he stops to show me the Nike FuelBand he’s wearing-a wristband he picked up at South by Southwest that tracks your movement and calories and syncs with an iPhone or iPod.

“I just was never drawn to advertising. It didn’t appeal to me,” says Binch. “I wanted to be part of a revolution, and digital felt more like that-and it was, you could sense it.” But by 2005, advertising had become a part of that revolution. The innovative, multiplatform campaign to bring the Mini Cooper to America (stunts included welding the small cars to the roofs of SUVs), and a Burger King viral video called the Subservient Chicken, put Crispin on Binch’s radar. “They were using the media in a way that we, as web geeks, hadn’t done before,” he explains.

In December 2005, Binch moved his family to Miami to work at Crispin, only to find out on his first day-fresh off a 26-hour drive-that the firm was relocating to Boulder. He hit the road again seven months later and headed to Colorado.

At Crispin, “a family of creatively driven misfits,” Binch participated in a post-bubble digital renaissance. By the time he left the agency in spring 2011-after working with accounts like American Express and Domino’s, which he helped make the fourth-largest e-commerce site on the Web-the firm’s digital team had grown from four to 400 people in six years.

Last year, after flirting with the idea of going to work at a start-up, Binch made the jump to Deutsch LA. The agency, housed in a dot-comish sort of warehouse near LAX, is a tech firm at its core, and Binch feels he is engaged in creating a clients’ product as much as he is in marketing it. “Websites are an extension of a client’s product,” he says, pointing to Volkswagen’s VW.com and smartphone manufacturer HTC.com. “I see our job as solving business problems with creativity. Sometimes the answer is a television spot, an event-sometimes it’s a mobile app or a social application. Sometimes they’ll have to work together.”

The competition isn’t just from direct peers but from all the online clutter. “People love cat videos,” Binch says. “They watch crazy shit online, and it’s very hard for us as marketers to compete with that kind of stuff.” The Internet has also created a torrid pace; Binch points to Pinterest, which seemed to come out of nowhere and instantly gained 10 million users.

Keeping up with social media and the next new thing is exhausting enough if you’re a consumer; staying ahead of the trends is downright consuming if it’s your job. “I feel like an old man,” says Binch, who is only 37. He thinks of today’s new hires as being from an entirely different generation-the Facebook generation as opposed to Binch’s website generation-and they “implicitly understand what’s shareable, how [social media] works, and how to ignite culture within it.”

Binch understands people’s fears about targeted ads-most of us don’t understand how they happen. The rules of the game have been invented on the fly, and Binch thinks advertisers need to give people the chance to opt out of ads that follow us around the Web. Deutch hasn’t rushed into this sort of hyper-personalization, and he cops to finding it all a little creepy.

Still, he mainly considers the trends exciting. The realms of TV, print, and radio have morphed into something that encompasses more forms of entertainment and speaks to people on a more personal level. Also, Binch says, for all the online feedback loops and metrics and obsession over search engine optimization, “The Mad Men thing still exists.” To make a product, a brand, emotionally evocative still takes an inspired leap of creativity. That’s why, at the end of the day, Binch revels in what he gets to do: “You’re coming up with ideas, selling stuff, and making stuff.”