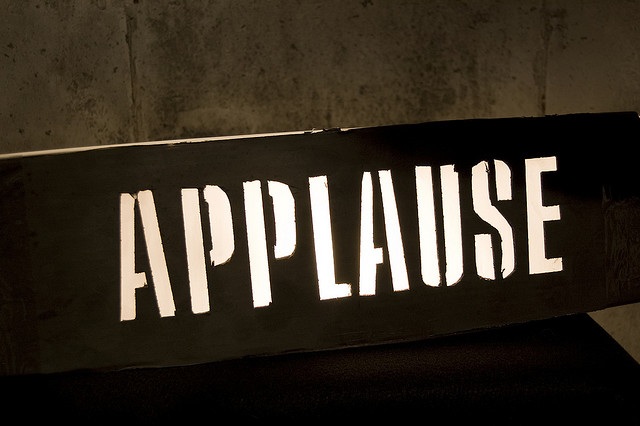 The main thing was to get on a game show as soon as possible.

You’d be amazed what money can do, “and who,” Marvin added,
as he stepped inside the mouth. The lights weren’t joking, the frivolity
was congealing, and good times were just ahead, getting tan.
The cost depended on the cast, the cast depended on who was doing
the director, and it was best to just get on with things. Haul ass!

Carla didn’t want to go inside the abandoned bikini factory.
“We’ll be late for ‘Kitchen Nightmares,’” she said, and then
said again since no one is listening. I, or the person nearest,
tugged her arm as we all looked forward, fidgeting, out of frame,
where the rain hadn’t touched in years but where the years
had been falling in a heavy cadence that was now pooling.

“I can’t see a thing,” said the new girl, and no surprise
she was the big winner. Money comes to us like dreams do to Indians,
mysterious, a thing of ancient worship and dread.
Lost ancestors, we cry, help us get ahead, but it is the mind
that’s missing. The timer is racing. Its digits are goodbyes.
Inside us, flashing, is a neon sign that says, “Applause!”

An associate professor of writing at the University of Southern California, Caley O’Dwyer’s poems have appeared in Alaska Quarterly Review, Prairie Schooner, Hayden’s Ferry Review, Washington Square, Spoon River Poetry Review, and other journals, as well as in The Dallas Morning News and The Tate Modern Museum in London. He is a winner of an Academy of American Poets Prize, a two-time nominee for the Pushcart Prize, a recipient of a Helene Wurlitzer grant for poetry, and a winner of the “Images” contest, judged by Yusef Komunyakaa. His first book of poems, Full Nova, is available on Orchises Press.