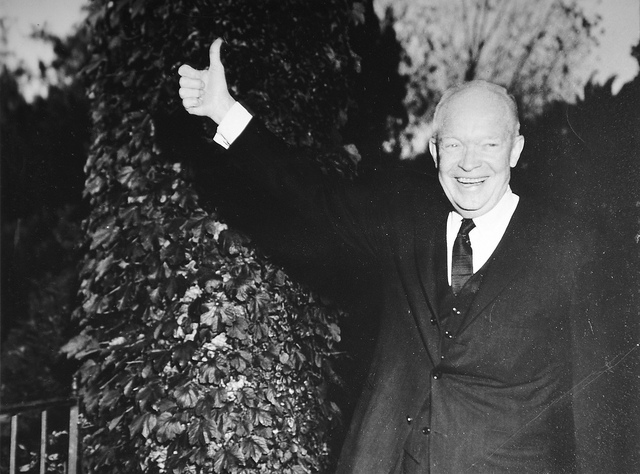 In July 1959, JFK had dinner with Arthur Schlesinger, Jr. at Hyannis Port, and late in the evening over drinks and cigars, the politician told the historian what he really thought of the sitting president. “No man is less loyal to old friends than Eisenhower,” Kennedy said with what Schlesinger later described as “contempt.” Eisenhower was “terribly cold and terribly vain,” Kennedy continued. “In fact, he is a shit.”

Most Americans, at the time and later, took a very different view of the 34th president. From 1944, when he led the allied forces to victory in Europe, Dwight D. Eisenhower was an international hero. Both Democrats and Republicans wanted him as their presidential candidate and courted him unrelentingly. In the White House, Ike’s favorability ratings hovered above 60 percent and sometimes approached 80 percent. Afraid to buck this popularity, mostly Democratic Congresses bowed to his will through two full terms. As late as 1968, according to Gallup, he was still the most admired man in America. And the familiar figure the public loved was far from cold or self-centered. On the contrary, he was seen as jovial, grinning, decent, avuncular and, if anything, a little too nice to be president.

So who exactly was Eisenhower–and why does he matter? A new flurry of public attention is posing both questions with fresh force.

Historians and biographers discovered long ago that Ike was not who he seemed. Beginning in the early 1980s, as the president’s diaries and archives became available, a generation of revisionist scholars painted a startling new picture of the iconic president. The new reading overlapped slightly with that of JFK–writers like Stephen Ambrose and Fred Greenstein found a new steeliness beneath the warm and fuzzy presidential persona–but all in all, it elevated Eisenhower.

In the revisionist telling, Eisenhower was much more capable and commanding than he had previously been understood to be. Yes, he had played a lot of golf and bridge. Yes, he garbled his syntax at press conferences. But, in reality, Ike had worked tirelessly to make running the country look easy. He was far from out of touch. When he delegated to subordinates, it was often a ploy to disguise his own involvement. Beneath the bland exterior, he was a cunning politician.

Greenstein’s metaphor was the “hidden hand.” Eisenhower’s M.O., at home and abroad, was to make things happen without leaving fingerprints. Among many telling examples was the way he dispatched his vice president, Richard Nixon, to rage about Communist subversion, bait Soviet leaders, kiss up to GOP regulars, distance the administration from Sen. Joseph McCarthy, and undertake countless other thankless errands that Ike himself would never be caught doing. Meanwhile, he and his administration delivered the peace and prosperity that many thought came automatically.

Fast forward to 2012. We’re in the middle of another wave of Eisenhower revisionism. Two new biographies have come out this year. A proposed monument on the Mall in Washington has prompted a burst of renewed interest. And, as in the 1980s, many readers are surprised by the Eisenhower they’re discovering.

What’s odd is that there’s been no revision of the revisionism. Both of this year’s biographies–one by Los Angeles Times journalist Jim Newton, the other from University of Toronto professor emeritus Jean Edward Smith–are largely admiring portraits that resurrect much of what was said by earlier scholars. Both books are thoroughly researched, compelling narratives. But neither departs in any meaningful way from the Ambrose-Greenstein revisionist line.

Even odder is that people seem to be surprised all over again. The revisionist understanding of the Eisenhower presidency has been conventional wisdom among scholars for 30 years. Apparently, though, most readers hadn’t bought it. The myth of the nice-guy, everybody’s-uncle, running-the-country-was-easy president was so strong that the truth never sank in.

For me, this raises two questions. First, I wonder if the true story will take this time or the myth will prevail again. Second, and maybe more important, I wonder why we as a nation can’t seem to get a true read on Eisenhower. Is there something about our politics–or our understanding of politics–that’s just too different?

For both Newton and Smith, the most important thing about Eisenhower was his moderation. Newton’s central theme is a phrase he borrows from Eisenhower’s own writings: Ike often said his goal was to find a “middle way” through the political thickets of his era. For Newton, “middle way” is a loose term–the best synonym is “balanced,” or the golden mean. And generally–civil rights is the exception–Newton finds favor with Eisenhower’s positions, often presented as so balanced that they come out sounding progressive.

So too with Smith’s account. If you blink, you might forget you’re reading about a Republican. Ike hated war and the military industrial complex. He spent liberally on infrastructure, expanded Social Security, and raised the minimum wage. Whatever his own view of desegregation, he appointed crusading judges and Supreme Court justices. He even–most delicious for a bien pensant biographer–had deeply mixed feelings about Richard Nixon.

This emphasis on moderation isn’t wrong. By today’s standards, Eisenhower was an exceedingly liberal Republican. He was a balancer by nature, suspicious of extremes. He saw America as a centrist nation, wanted to govern from the center, and fought bitterly throughout his presidency with the right wing of his party–Old Guard Republicans who wanted to roll back the New Deal and withdraw America from the world.

Still, I don’t think Newton or Smith get Ike quite right-neither where he was on the political spectrum nor the truly radical nature of his nonpartisanship.

Eisenhower was very precise in his writings about the middle way. For him, it wasn’t just somewhere in the hazy center between left and right. He rejected both Old Guard Republicanism and what he dismissed as “New Deal-Fair Deal” Democrats–but still stood firmly on the center right, with no uncertainty about what he thought best for the country.

Ike never considered running as a Democrat–he believed too much in the power of free enterprise. “As between the so-called … welfare state and the operation of … competitive enterprise, there is no doubt where I stand,” he wrote in his diary. “I am not on any fence.” He believed staunchly in limited government, abhorred what he called the “handout state,” was unwaveringly anti-Communist and determined to project American power in the world, albeit peacefully. To see him simply as a balancer–straddling the golden mean, wherever that was, and ultimately closer to liberal than conservative–is going too far.

At the same time, both Newton and Smith miss what’s most distinctive about Eisenhower and hard to understand today: a public persona that was not just “moderate” or “centrist,” but deliberately nonpartisan. However strong his partisan leanings, Ike thought he should hide them from the American people.

As Fred Greenstein noted in his earlier revisionist study, Ike wanted to be head of state, not head of a partisan government. He loathed having to identify with either party: he felt it was a betrayal of half the voters. Partisan appeals and attacks were for subordinates. The stance he sought wasn’t between the parties–it was genuinely beyond them.

Today, of course, this would be unimaginable. Presidents today see heading up their parties as an essential part of the job. As voters, we approach and understand politics through the twin prisms of tribe and ideology. We expect our presidents to be both party leader and commander-in-chief.

In the ’50s, Ike’s way was exactly what voters wanted. Reeling from the Depression, war (in Europe and Korea), a bitter postwar period of partisanship, labor strife, and wrenching McCarthyism, most Americans wanted not just a balancer but someone who could put politics to rest.

Eisenhower played to this hunger for calm and consensus, even while deploying a team of not-so-neutered subordinates to accomplish his ambitious goals–from avoiding war with the Soviets (after the Korean War, which he ended quickly, not a single American serviceman or woman died on Eisenhower’s watch) to fiscal discipline and historic economic growth.

In the long run, of course, it couldn’t last. In 1960, JFK was still competing with Ike to claim the political center. But eventually the blandness of the ’50s gave way to the tumult of the ’60s, and Eisenhower’s nonpartisan non-politics helped produce the ultra-partisanship of the conservative movement that emerged during his years in the White House. As National Review publisher William Rusher later wrote to editor-in-chief William F. Buckley, Jr., “Modern American conservatism largely organized itself during, and in explicit opposition to, the Eisenhower administration.”

What happened next is history, and we can’t go back to the ’50s–too much has changed. But hard as it is for us to understand him, Eisenhower stands out as a lodestar. Middle way hardly captures it. It’s the difference between politics and leadership.

Tamar Jacoby, a fellow at the New America Foundation and the Center for Social Cohesion at Arizona State University, is writing a book about what worked in the 1950s.