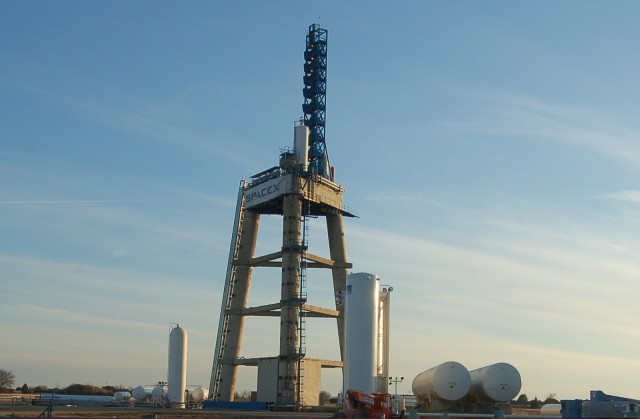 Later this week, a Falcon 9 rocket built by SpaceX, a young company founded by Elon Musk, is scheduled to launch from Cape Canaveral in Florida. The rocket will carry a Dragon capsule, also built by SpaceX, to the International Space Station. This is being hailed as a conspicuously important achievement because SpaceX, which Musk founded in 2002 with money from his share of PayPal, is a private company. The temptation to celebrate the privatization of space exploration–the unleashing of all those entrepreneurial billionaires to take us where we haven’t been before–is understandable. But it’s also misguided.

Uncle Sam is still the indispensable player in this venture. The U.S. government, via NASA, has paid SpaceX about $350 million over the past five years, which is about half of the company’s budget. (The rest has come from Musk’s fortune and other contracts.) The company’s launches–from Omelek Island in the Pacific, from Vandenberg Air Force Base in California, and from Cape Canaveral–depend on government infrastructure.

SpaceX is an enormously exciting company. But their rockets are deliberately not novel–they’re based on proven designs to make them as reliable as possible. All three of the company’s rockets (the smaller Falcon 1 and larger Falcon Heavy) will use the same engine, in various clusters, called the Merlin. The Merlin is based on a design first used in the Apollo program on the lunar module’s landing engine. What is novel about SpaceX is not its technology; it’s that it is a well-run company hustling to compete for business.

Such competition existed during the space program’s heyday, in the Apollo years. But it has eroded in the intervening decades, leaving one company, the United Launch Alliance, with a near-monopoly. Musk is far from the first visionary to found an aerospace company, and the government was an equally important partner to all his predecessors. In what became a recurring pattern, the Wright brothers’ first contract (after years of self-funded struggles) was with the U.S. military. They signed a contract with the Army Signal Corps in early 1908. In 1912, aviation pioneer Glenn Martin founded a company in Santa Ana, California, building trainers for the Army Signal Corps. Two brothers, Allan and Malcolm Loughead, founded the Alco Hydro-Plane Company in San Francisco. Martin flew stunts to make money in the early days; Allan was a racecar driver.

In 1916, Martin and the Wright brothers merged their companies, and William Boeing created the Pacific Aero Products Company in Seattle. Boeing was already rich, having made a fortune in timber (after starting out with a generous inheritance). Donald Douglas started a company in Long Beach in 1921. James McDonnell started an aviation firm in Milwaukee in 1926 (this company would go bust, and McDonnell would try again in 1939 in St. Louis, with greater success).

Now let’s take a ride on the merger express. Following the 1916 merger of Wright and Martin, a super-merger of 12 companies in 1929 created the Curtiss-Wright Corporation. Alco Hydro-Plane would go out of business after a few years, but the Loughead brothers, who pronounced their names “Lockheed,” would try again with the Lockheed Aircraft Corporation. In 1961, Martin, who had left the joint venture with the Wright brothers to found another company, would merge that second company with the American-Marietta Corporation, becoming Martin Marietta. McDonnell and Douglas merged in 1967. In 1995, Lockheed and Martin became Lockheed Martin. A couple years later, in 1997, Boeing and McDonnell Douglas would merge. This left two companies: Boeing, and Lockheed Martin.

During these decades, the aviation companies became aerospace companies, building rockets for the US government even as they continued to make airplanes. The mergers of the late ’90s left Lockheed Martin building the Titan and Atlas rockets; Boeing had the Delta. (Lockheed Martin built the external tank for the Space Shuttle, while a company that was later acquired by Boeing built the orbiter). In 2006, Boeing and Lockheed Martin decided that they were better off not competing with each other and got the feds to approve a joint venture: the United Launch Alliance (ULA), half of which is owned by each company.

Though ULA has had an effective monopoly in the U.S., it has foreign competitors: the Europeans, the Russians, the Chinese. But the major customer for space launch, the U.S. government, must use an American company. For years, that has meant ULA. As ULA vice president George Sowers told Congress last fall, “Every GPS satellite, every missile warning satellite, nearly every intelligence collection satellite, weather satellite, and military communications satellite and nearly every major NASA science mission has been launched–successfully–on a ULA or ULA heritage product.” The launches were indeed successful, but at what cost?

As a GAO report from last year narrates, the Federal Trade Commission originally opposed the Lockheed Martin-Boeing partial merger that created ULA but was overruled by the Defense Department, which cited vague “benefits to national security.” After the merger went through, the GAO report says, costs for the EELV program (the government’s main program to create next-generation rockets) began to rise steeply.

ULA, like SpaceX, is a corporation (albeit one with a more complicated corporate governance structure). The question isn’t whether a program is “run by government bureaucrats” or by “private industry” but, rather, whether the industry is competitive. That’s why the approach recommended by the House appropriations committee in late April is dangerously counterproductive. The house bill calls for “an immediate downselect to a single competitor,” saying that this will allow NASA to save money. But by saving a little bit in the short run while undermining competition, this would drive up long-term costs, as has happened to NASA in the past three decades.

In an August report, NASA estimated that it would have cost almost $4 billion for NASA to develop the Falcon 9 using a traditional approach, while it could be done with $1.7 billion using a more “commercial” approach. SpaceX has spent, says Musk, $300 million to develop the Falcon 9. This is remarkable, and praiseworthy. But it has nothing to do with whether a launch is notionally under the control of NASA or of a private contractor and everything to do with bloat at old-line companies like ULA. The August report cited “organizational complexity,” too large a workforce, and too many “management layers” as reasons the old approach was so expensive.

SpaceX is fun: it was, after all, the first to send into orbit and return a top-secret wheel of cheese (in 2010). But both the Dragon and the Falcon 9 are two years behind schedule. It may be that a promised market in space tourism will boom in the next decade, leading to greater private demand. But even in the rosiest of scenarios, the market for space launch will remain highly regulated, and costs will depend on regulatory decisions. SpaceX is, like its rival ULA, dependent on the government for its livelihood. The Alco-Hydroplane company was once small and nimble; so was the Glenn L Martin aircraft company and Pacific Aero Products. Douglas Aviation’s DC-3 revolutionized air travel.

In March, 2011, ULA announced a partnership with XCOR, one of SpaceX’s smaller rivals. For now, SpaceX has stayed clear of such entangling alliances, even when Musk was broke in 2010. If it can remain independent and reintroduce competition in an industry that has seen a half-century of corporate consolidation, access to space may finally get cheaper. The profusion of politically connected government contractors seeking monopolistic deals has done more to make getting to space so expensive than anything inherent in the cost of rocket nozzles.

Konstantin Kakaes, a former Economist correspondent in Mexico, is a Schwartz Fellow at The New America Foundation in Washington, D.C.