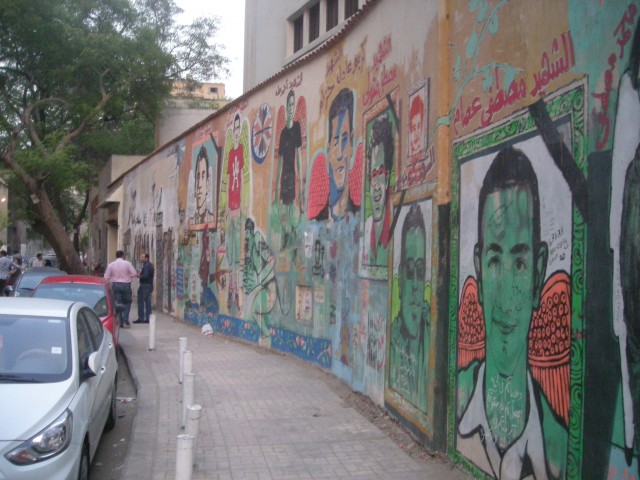 CAIRO – The cityscape looks a bit different these days. Buildings are sporting a darker layer of dust, and graffiti–provocative, elaborate, and in defiance of the regime–is everywhere. Walk beyond Tahrir Square and you’ll see a snake with Mubarak’s wife as its head, hieroglyphic renditions of the uprising, and psychedelic memorials to the revolution’s martyrs. Graffiti, nearly absent prior to 2011, is now so ubiquitous it’s almost passé.

Then there are the campaign ads. Egyptians are voting in a competitive presidential election this week. The frontrunners’ faces are plastered everywhere–peering out from billboard portraits with arms crossed, stretching their lips into slightly menacing smiles. They look more like the Sopranos than politicians.

In the chaotic year and a half since January 2011, Tahrir Square has gone from the site of revolt to the sanctioned area for protest. The Supreme Council of the Armed Forces (SCAF), which has ruled since Hosni Mubarak’s ouster, now tacitly permits various demonstrations in the city center as a sort of safety valve. The SCAF’s tolerance for protests doesn’t, however, extend to the Ministry of Defense. Recent protests in front of it were met with water cannons, tear gas, and rocks. 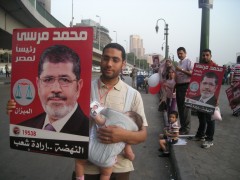 Nearly every Friday, some group or party–increasingly the Muslim Brotherhood and other Islamists–calls for a “million man march” on Tahrir. Only a few thousand, at most, show up. Vendors sell flags, revolution kitsch, and, of course, the obligatory Sponge Bob T-shirts.

Politics are moving at a dizzying pace. Drama between the SCAF, the ruling military council, and the Muslim Brotherhood-led legislature sets the backdrop. The Cabinet has been disbanded and shuffled; the military has met political protests with violence; the economy remains stagnant. The Ministry of Foreign Affairs is keeping up business as usual. The constitution, which will delineate the president’s powers, has not yet been written.

All eyes are focused on how quickly the ruling military authority transfers power to the elected executive, with June 30th being the military’s ostensible deadline. How much power will the mysterious council of somewhere between 19 and 21 members be willing to give up? One thing is certain: they aren’t as popular as last year. The approval rating of de-facto ruler Field Marshall Hussein Tantawi has fallen 27 points since then, to 63 percent, according to a recent poll.

The once-popular slogan “The people and the army are one” still decorates most army tanks, often beside the image of a soldier cradling an infant, but such images are no longer in fashion. “That poster is the SCAF’s unconscious projection of their opinion of the Egyptian people,” said Nour Ali, a McSweeney’s columnist based here. “We’re the equivalent of drooling toddlers to them.” Still, the 63 percent of Egyptians who approve of the military custodians do represent a silent majority. They are citizens frustrated more by the traffic jams caused by demonstrations than by unlawful military trials of citizens.

Egyptians are being treated to extravagant campaign promises. Former Aviation Minister Ahmed Shafiq, who is favored by Mubarak enthusiasts, has vowed that if elected president he will fix Cairo’s infamous traffic problem within 24 hours. “I really mean it,” he barked to business elites at a luncheon hosted by the American Chamber of Commerce last week. He did not share the details of how he would pull off such a miracle.

No one has any idea who will win Egypt’s top post. Amr Moussa is the leading secular candidate, having served as foreign minister in the 90’s under Mubarak and, over the past decade, secretary general of the Arab League. He is popular for his strong criticism of Israel, yet he has little to show for his tenure at the Arab League other than being the first senior Arab official to visit Hamas-ruled Gaza. Although polls had forecasted him as a front-runner, lately he’s struggling to keep up.

Mubarak loyalist Ahmed Shafiq is wooing voters who crave the status quo. Shafiq served as Mubarak’s prime minister amid the uprising, resigning just a month after his boss did. He has since risen like a phoenix, although he is a counterrevolutionary par excellence, and he vows to remove protesters from Tahrir Square forcibly, as if the uprising never occurred. Speaking to the American Chamber, Shafiq called Mubarak, “an ideal person,” because of his old boss’s “ability to separate personal relationships from work.”

At the other end of the spectrum is Abdel Moneim Aboul Fotouh, a political independent who broke with the Muslim Brotherhood and has fashioned himself a progressive Islamist. His senior campaign advisor is an activist-academic with Marxist roots, and yet he also appeals to Salafi Islamists. According to Egypt analyst Issandr-El-Amrani, Aboul Fotouh’s bid “drives a wedge” into the Muslim Brotherhood, and this is a boost that could win him the presidency.

Perhaps the Muslim Brotherhood should have sat this race out as they had originally planned. Muhammed Morsi, the candidate put forward by Freedom and Justice Party, the Muslim Brotherhood’s political wing, is far from dynamic or popular. Islamist parties won an impressive victory in the November parliamentary vote, but Morsi hasn’t been polling well. Apparently the party’s parliamentary initiatives haven’t impressed voters yet. 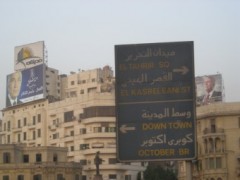 To the disappointment of the youth who launched the revolution, other secular candidates are trailing by a wide margin. They make up a hodgepodge that includes a former police chief, a diplomat, an Islamist thinker, an intelligence officer, rebel jurist and a Nasserist, to name just a few. It’s safe to say all are stepping on each other’s toes. At the opposite end of the spectrum, an ultra-conservative Islamist candidate has been disqualified for technical reasons, but his supporters make up an emerging power base.

What does it all add up to? “Egypt’s next president will take the helm of a country on the cusp of a renaissance and on the verge of a nervous breakdown,” writes veteran journalist Ashraf Khalil. The voting will take place on Wednesday and Thursday, and a run off will take place on June 16 and 17 if no candidate wins an outright majority. In any case, the duties of the new president are only vaguely spelled out. Egypt’s old constitution isn’t fit to govern this transition, and the new one is yet to be written. The SCAF is likely to adjust the next president’s role to its advantage, and it’s anticipated that they will issue a constitutional edict just a day before the vote.

Whatever role the new president carves out for himself, the first issue he will have to address is the economy, with security a close second. Tourism has plummeted, and foreign reserves have declined from $36 billion in early 2011 to about $15 billion today. Other looming issues might have to wait.

Revolutions are long and sticky processes. The previous order, as Egyptians are now discovering, generally proves more resilient than imagined. Nevertheless, encouraging hints of the country’s future politics were on display during the first presidential debate in Egypt–the first in the Arab world–which turned into a four-and-a-half-hour marathon. Under Mubarak, citizens were never allowed to inquire about the president’s finances or health (considered a state secret), but there was Aboul Fotouh holding his own medical forms, and Moussa was trying to justify why he wouldn’t share his. Thousands watched the debate on large flat screens across Cairo’s outdoor cafes, alternately applauding and yelling.

The next citywide viewing party will be focused on the vote tally.

Jonathan Guyer is associate editor of the Cairo Review of Global Affairs. He can be followed on Twitter at @mideastXmidwest.