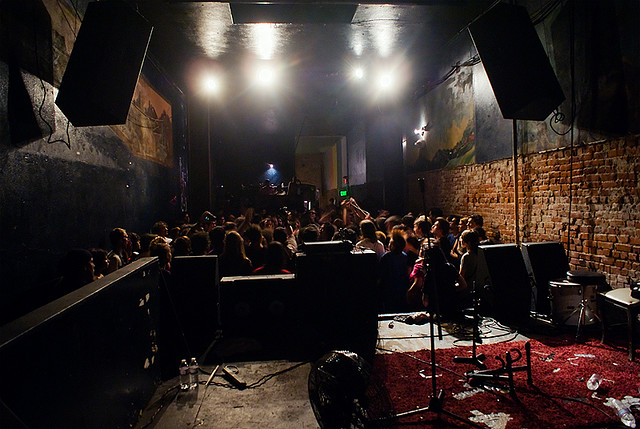 I define myself as much by my love for music as by my love for books. So my first trip to The Smell, a tiny do-it-yourself music venue in Downtown L.A., was an experience deserving of excessive cliché (eye-opening! life-changing!). The bands I heard altered my perception of how music could be played, distributed, and enjoyed. But as I waited for them to start (with the tardiness characteristic of DIY concerts), I was just as enlightened by the venue’s small but eclectic communal bookshelves.

The entrance to The Smell is dressed up in a collage of graffiti–everything from simple tags to more intricate wheatpaste poster art. As you step inside, the stimuli are overwhelming–not just the glorious cacophony of a band or a DJ set crackling through the ancient PA system, but also the venue’s namesake. As you enter the lobby from an alley, a bouquet of cigarette smoke and bodily humors wafts over you.

This unpleasantness fades as you weave through the hip crowd deeper into the lobby, where you find tired couches struggling to support their passengers, colorful murals hiding the walls, a small vegan snack bar, and that pair of bookshelves.

They are painted a very punk rock neon green; a smaller magazine shelf next to them is in pink. There are signs, written in Sharpie and laminated, that tell you the books are yours for the taking–as long as you bring them back. This library carries a motley assortment of your typical yard sale/thrift store volumes (think Edgar Allen Poe and other long-discarded high school English class reads), cult classics like Wild Animus, and the occasional compact Bible (which my friend began sifting through in hopes of discovering the verse that inspired The Byrds’ “Turn! Turn! Turn!”).

I’m drawn to a tiny shelf stuffed with self-published, Xeroxed and stapled zines–indie magazines I had only read about before. In Our Band Could Be Your Life, a book about the American independent music scene in the ’80s and ’90s, Michael Azerrad describes zines as crucial to the dissemination of good music before the advent of the Internet. But to my amazement, they’re still being published today and distributed at places like The Smell. And, as I flip through disturbing, surreal comix and off-the-cuff artist interviews, I discover they’re still highly creative–in content and in format. The zines contain handwritten pieces along with articles written on a typewriter, then cut up and pasted into the confines of a half-page. Sometimes they’re even arranged in ways that force the reader to rotate the zine with each new page.

The New York publishing giant Jane Friedman recently told the Wall Street Journal that her library “really tells the story of my life.” This is true of The Smell’s bookshelves, too. This library gathers the cast-aside, the niche, and the outdated, bringing them together with the respect they deserve. This is exactly the function the venue plays in music, gathering musicians who are deemed too weird for more fashionable gigs. At The Smell you’ll find bands using equipment that’s old-fashioned because it’s cheaper–but which leads to innovation–and releasing their music on vinyl and cassettes just because it’s fun.

Such a place may seem unworkable, with people taking advantage of the musical openness and the library honor system and the open cashbox at the door where you pay cover. But then you discover that the whole venue is volunteer-run: everyone “working” just shows up to help out, often including the band members themselves. Despite this apparent disorganization and disavowal of a typical business model, order is kept and everything keeps chugging along smoothly.

The bookshelves at The Smell may not exactly be a focal point for its guests, but they tell the place’s story to anyone willing to listen.

Jeff Sizemore is studying English and film at UC Irvine.