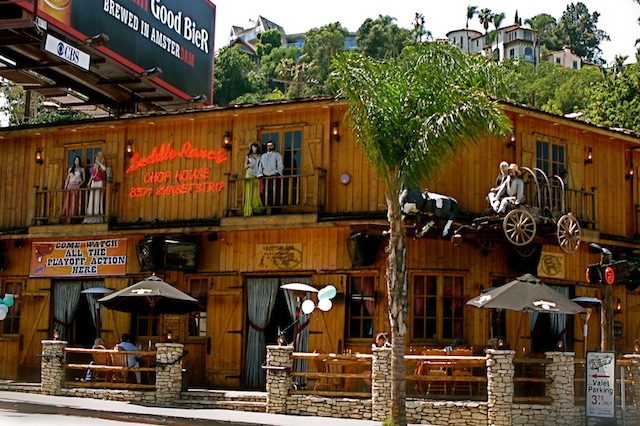 If you live in Los Angeles, odds are you’ve been to Saddle Ranch, the misplaced “rodeo bar” on Sunset Boulevard that sticks out like a Ron Artest people’s elbow. It’s where guys go because they think it’s an easy place to score and girls go because–well, I can’t quite figure out why girls go there.

No, there’s nothing Hollywood about this bar. The chicks aren’t the sexiest in L.A. The guys aren’t the cleanest cut. And if you’re looking for stars, you’re better off at The Den across the street. But for what it lacks in prestige, it makes up for with a weird sort of character. You know it’s a dump, but you’ll end up there anyway. If Saddle Ranch were part of the Seinfeld gang, it would be Kramer. Out of place–but endearing.

I first entered Saddle Ranch five years ago, when I visited Los Angeles for my cousin’s wedding. The night before the wedding, I attended the rehearsal dinner, but after eight or 10 libations and some food, the official part of the evening was over. Which begged a question: what now? My cousin’s bride went to bed, but my cousin rallied his troops to lead them to a new place of conquest. I learned that I should look forward to a “shithole with lots of loose women, cheap drinks, and a mechanical bull.” This sounded all right by me.

Since I was 19, my ID was a flimsy, obviously counterfeit New York State driver’s license. But because it had worked without fail at all four bars and all three liquor stores in Hamilton, New York, I had a sense of bravado. The key, as I saw it, wasn’t so much the ID but the attitude. I pumped up my chest and dished out my fake with swag. The bouncer told me to get lost. A clever retort from me didn’t help. Then my cousin flashed a Benjamin Franklin in the bouncer’s face. That helped even less.

The reasonable part of my head told me to walk to Sunset Boulevard, hail a cab, and rest up before the wedding. But the douchey, more frequently used part of my head saw an opening in a flimsy rope fence blocking off the outdoor area of the bar from Sunset. It was crowded, so I looked both ways, pulled a shimmy over a wooden pole, and found myself inside. For the next hour or so, I alternated between ripping shots of tequila and playing hide-and-seek with the bouncer, who’d seen my maneuver. He’d come into the bar and peer around, but he was large, so I always saw him first and managed to hightail it into the bathroom.

That night, I was 19 and surrounded by 20-somethings. It felt pretty good just to get in. Today, I live in L.A., and I’m long since legal. I’ve (clearly) learned that Saddle Ranch isn’t considered the coolest place to go. But it’s hard to have a bad time there. You’ll always encounter someone more inebriated, more demented, and more pathetic than you are. Plus, nowhere else in Southern California can you see, as I once did, a 300-plus-pound black lady riding a mechanical bull at one in the morning.

I have no burning desire to return to Saddle Ranch. But based on my record and the company I keep, I know the two of us aren’t finished. I’ll be out one night with a few friends and short on appealing options. We’ll turn to each other and say, “Fuck it.” Minutes later, we’ll be at the bar of Saddle Ranch.

Barry Rothbard is a freelance writer based in Southern California and the brother of Zócalo’s managing & books editor, who may have accompanied him on his maiden Saddle Ranch voyage.