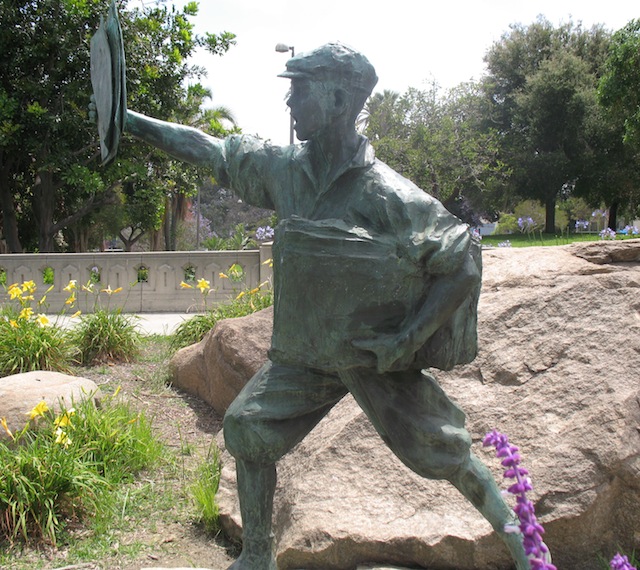 In 1940 my brother and I went into the newspaper business. I was 10 and Raul was eight. Father had made us a wagon out of plywood. It was an awkward-looking, box-like contraption with a steering mechanism and wheels from an old Radio Flyer, but it was ours and we loved it. We gave our little sisters Alma and Norma rides in it up and down the sidewalk in front of our home, a large white house at 58th and San Pedro Streets in south Los Angeles. It was a pleasant neighborhood of single-family residences with large yards, and on nearby Slauson Avenue was a Weber’s Bakery that filled the area with the aroma of baking bread. When we started delivering Sunday newspapers, our wagon would serve us well.

On Saturday afternoons we assembled with other newsboys at the corner of 61st Street and San Pedro, just outside a pharmacy, to await the arrival of the truck that delivered our papers to us. Several of the boys would pass the time “lagging” pennies against the pharmacy wall. The boy whose coin came to rest nearest the wall won all the pennies. I never joined in. Earning money appealed to me; the risk of losing it didn’t.

When our papers arrived, delivered to us by a man named Greeno, we’d pack them into our wagon and go to work. Although it was Saturday, we peddled the Sunday editions of both the Los Angeles Times and the Los Angeles Examiner. (Even as a boy I knew that the Chandlers owned the former and Hearst owned the latter.) Our route covered the streets south of 61st Street between San Pedro and Main. We pulled our wagon and called out in a loud singsong, “EX-aminer, times, pap-ER!” Buyers would swing open the screen doors of their houses to tell us which paper they wanted, and one of us would take it to the door. Customers who wanted both the Times and the Examiner made us very happy. On Sunday mornings we’d retrace the route. So as not to bother sleepers, we lowered the volume of our commercial announcements.

In 1941 we got an after-school assignment selling afternoon newspapers–the Herald-Express, the Daily News and the Mirror--at the intersection of Main Street and Slauson Avenue. It was a heavily trafficked corner, good for business. I sold my papers at the northwest corner, and Raul sold his at the southeast corner, next to the enormous Peerless Laundry. (This was before people had their own washing machines.) At the end of the workday, scores of laundry employees, most of them women, streamed out of the building.

Our papers came to us from a man who drove a bright-green, cut-down car that resembled a Model T Ford. He would toss our papers onto the sidewalk and speed away. We never met him. We dealt with our distributor, Bill, a dapper fellow who usually wore a sports coat and tie. He was the father of a girl who was in my class at St. Columbkille’s, south of us at 64th and Main. When it was time to settle our accounts, Raul and I would watch closely as Bill calculated the total number of papers we had sold, handed us our share of the proceeds, and took back the few newspapers that remained unsold. The price of a newspaper was five cents, two cents of which were our earnings.

All of my memories of those times are bound up with music. Big bands were at their peak of popularity, and a jukebox inside the pharmacy at 61st and San Pedro played them all the time. Glenn Miller’s “Elmer’s Tune” was a little corny, but I liked it. Tommy Dorsey had a new singer named Sinatra, whose recording of the melancholy ballad “I’ll Never Smile Again” was popular. From the living rooms of the houses between San Pedro and Main came a different sort of music, the unfamiliar songs of a radio program called the Grand Ole Opry. And at a barbershop near my post on Main Street played a radio show called Hawaii Calls, featuring the singer Hilo Hattie and the orchestra of Harry Owens and His Royal Hawaiians. Between the songs, the announcer said that if we listened carefully we could hear the waves of the Pacific Ocean lapping up onto Waikiki Beach. The attack on Pearl Harbor was still in the future.

I paid close attention to the headlines and remember many of them well. Sixteen B-25s led by Lt. Col. James Doolittle bombed Tokyo on April 18th, 1942. Raul and I were on the job that day, and we knew Jimmy Doolittle had graduated from Manual Arts High School, not far from our corner. An actress named Joan Barry filed a paternity suit against Charlie Chaplin in 1943. The trial made headlines for days.

A café on my side of Main Street did a thriving business. Once, on a blusteringly cold and rainy day, Raul and I went inside. I was normally conscientious to a fault about bringing home every penny of my earnings to mother, but that day we ordered a bowl apiece of their chicken soup. Served with crackers and a dash of guilt.

A street car line ran north and south on Main Street. To board, passengers would gather in loading zones that consisted of painted white lines and two concrete buttons with red glass reflectors to warn oncoming automobiles. We newsboys would join them and sell papers there as cars rushed past us. When the traffic signal changed to STOP, we had autos to the left and right. With luck we could make several sales in that moment.

I carried three or four copies of each of my newspapers under my left arm. The rest I’d place near the buttons, where I could keep an eye on them. I did a brisk business, and my right pants pocket got heavy with coins. On a bad day, the coins would create a hole in the pocket and begin trickling out. Transferring them to my left pocket slowed me down when I had to make change, so I bought a coin dispenser of the type streetcar conductors used and attached it to the front of my belt. But conductors didn’t have to run. I did. The coins would jiggle about in their cylinders and get stuck. The experiment was abandoned.

Occasionally, a streetcar passenger would buy a paper. He’d hand his money down, and I’d hand his newspaper up. One afternoon, a customer gave me a dollar bill, but the traffic signal changed so fast that I had no time to give him his change. I hoped he would pass that way again to get it, but he never did.

At one point, Raul began to come up short in his accounts. He insisted he had no idea what happened to the missing money, and even Bill joined us in an attempt to solve the mystery. Some years later, recalling that Raul had often disappeared from his corner to go into the laundry to sell papers, I asked Raul if he’d spent the missing money. He answered in the affirmative. My guess is that Raul enjoyed many bowls of soup.

I particularly enjoyed Saturday mornings. We’d report to our corners before noon to hawk a football edition of the Herald-Express. USC played their Saturday afternoon home games at the nearby Coliseum. In 1944 Raul and I attended our first Coliseum football game, the first of many to follow. It was the USC-UCLA game. I wouldn’t have dreamed that 13 years later I would graduate from UCLA.

One winter evening after dark, I stood in the streetcar loading zone hoping to sell my few remaining papers. Cars sped past me as usual, curving around the buttons with the red glass reflectors. Then, to the north, I saw a car heading toward me. I was aware of the brightness of its headlights. It did not veer around the buttons. When it hit me, I went straight up into the air and landed on my back. A small group of people gathered around. The driver of the car came over as well. He looked terrified. It was Bill. As he bent over me I smelled alcohol on his breath. Except for some soreness I was unhurt. Bill drove us home. I stayed in bed for a couple of days. Bill visited me a day or so later and soon disappeared from my life. We never returned to our corners.

Six years later, in June 1950, Raul and I made a trip to Yosemite. I had recently bought my first car and thought it a good idea to travel somewhere in it. While there, we heard on the car radio that North Korean troops had invaded South Korea and that President Truman planned to have American troops assist the South Koreans. The following year, I was drafted into the Army. Raul enlisted in the Air Force and served four years as a cryptographer. In 1964, Raul died of complications from multiple sclerosis, a condition the U.S. government classified as service-connected. He was thirty-two years old.

Is life unfair? Of course it is.