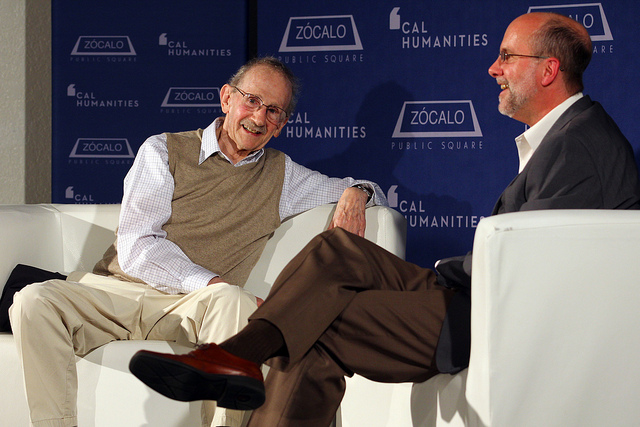 U.S. Poet Laureate Philip Levine thinks that democracy in America today is “unhealthy” and “a wreck.” Yet in a wide-ranging, often raucous conversation with Sacramento Bee editorial page editor Stuart Leavenworth, he also proclaimed himself “sanguine” about America, and in particular about the level of engagement and community in the cities he calls home: Fresno and New York. The question Leavenworth tasked Levine with for the evening–as part of the Zócalo/Cal Humanities “Searching for Democracy Series,” at Frank’s Place in Fresno–was whether the country’s increasing social isolation is a threat to democracy. Yes and no, Levine answered.

The two polar views seemed to come in part from the wide range of American experiences Levine has had in his 84 years. He was born and raised in Detroit and considered the lower-middle-class neighborhood where he grew up to be his community. “I thought Detroit was a wonderful place to be” in the 1940s, Levine said. Once World War II began, everybody had a job. “There wasn’t much to buy during the war,” he recalled, “so people spent money on fun.” Hanging around with his friends, he danced and drank and smoked. He recalled taking a boat out to the middle of Lake Erie to drink Ohio beer: “You had a view of Cleveland, the only city in American uglier than Detroit.” He also took out girls. “We called them ‘girls’ then,” Levine said. “The influence of Berkeley hadn’t hit Detroit yet. In Berkeley, if you’re eight and a female, you’re a woman.

But despite the wonderful sense of community in his Detroit, he knew–and has written about extensively–the darker side of the city. “What happened to Detroit?” asked Leavenworth. 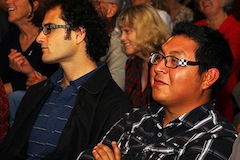 Levine explained how racism and class divisions ate away at Detroit from within, how American car manufacturers stopped making quality products, and how white flight drove “everybody who had any money to the suburbs.” He pointed to the invective of Father Charles Coughlin as well as to the policies of automakers like Henry Ford, who pitted workers against one another.

“Who are the modern Father Coughlins trying to break down community in our country?” asked Leavenworth.

Levine cited the Supreme Court, and in particular the Citizens United ruling that corporations have the same rights to self-expression–and to make campaign donations–as people. But he also believes that “we’re constantly besieged by notions that we don’t belong to a community but belong to a particular community” in opposition to other communities: Fresno vs. Bakersfield, the U.S. vs. Canada. “There are all these fundamental things that are here to define us as different from people who are pretty much like us,” said Levine. “And if we knew them, we might love them.”

Levine hasn’t been shy about criticizing the many presidential administrations he’s lived through–and he doesn’t think that America’s executives have changed all that much. “There’s a myth that when I was a boy, ‘Oh my God, FDR was the president and this was a healthy democracy.’ Oh, come on!” he said. “It was different, but it wasn’t healthy.”

Leavenworth challenged Levine on his pessimism. Even after he was named poet laureate, Levine enjoyed the liberty to criticize American politicians. “You said incredible things about the president and our Congress,” said Leavenworth.

“You live in a place where you can say whatever you want,” said Leavenworth, particularly in comparison to, say, Federico García Lorca. “Isn’t that a sign of at least a somewhat healthy democracy?” 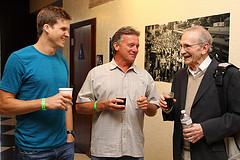 “It’s a hell of a lot healthier than Spain under Franco,” said Levine. “One wishes that it were possible to elect people who would act out our desires, our needs, our vision of what America could be. Walt Whitman’s vision. William Blake’s vision of America. There’s no one running on the William Blake party.”

Levine asked Leavenworth to read a poem called “Old World,” set on a train in Denmark. Based on personal experience, it’s the story of an older woman directing his attention to the Royal Deer Park out the train’s window. The poem concludes:

“In your land you have not even this?” she asked. Speaking slowly–still caught up in my novel–I explained that in my country we had no kings or queens and therefore no royal parks. “Exactly,” she said, & her white-gloved hand abruptly closed my book. “Here in my kingdom you must not read, you must look.”

Said Levine: “I have never read that aloud. I’m stunned by its beauty.”

After the audience stopped laughing, Leavenworth asked Levine to talk a little bit about what the poem says about America. “What I was struck by was [the woman’s] impudence, which I admired. I loved it. I thought, boy when I get to be her age …” said Levine. “Now, on trains–and the trains I use the most are [New York City] subway trains–it’s rare that someone doesn’t get up and give me his or her seat.” A few weeks ago, “a young pregnant black woman offered me her seat,” he said. When he demurred, “a guy got up and gave me his seat.”

Leavenworth asked Levine to read one more poem, “Our Valley,” about summer in the Central Valley:

We don’t see the ocean, not ever, but in July and August
when the worst heat seems to rise from the hard clay
of this valley, you could be walking through a fig orchard
when suddenly the wind cools and for a moment
you get a whiff of salt …

“There’s a line in there that’s a little different from Woody Guthrie,” said Leavenworth. “‘You have to remember this isn’t your land.’ What’s the point you’re making there?”

The land “belongs to no one,” said Levine. “I’m talking about in a profound sense there’s no such thing as private ownership, especially of something like land. How can you buy and sell something that you had no part in creating?”

Although the poem moves from California to Spain, it’s firmly rooted in the Central Valley. “You wouldn’t have written this poem early in your career,” said Leavenworth. That’s true, said Levine, who said that he wouldn’t have written it “if, say, I had settled in Brooklyn in 1958, which is, I’m sorry to say, when I first came here.”

He immediately turned serious about his love for Fresno, the city he’s come to call home and the community he’s built there. “I had great students, I had fabulous friends that I made here–fellow poets who are still here, thank God,” he said.

Leavenworth asked Levine to turn to the question of social isolation and engagement in a changing media landscape. Newspapers, radio, television all used to form “a basis for people to engage in their community.” Are people still engaging in the same way? 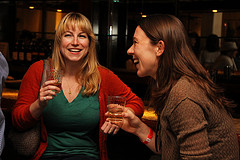 Levine said that the photographs in Life magazine had a profound impact on him, particularly during the Spanish Civil War and World War II. “The photos were there to tell you what the world was really like,” he said. Today in New York, you can experience that from The New York Times and local NPR affiliates–and from simply going out and about. “If you want to feel what the city’s like you just get in the subway and get out somewhere,” he said. Although he isn’t on Twitter, and he only joined Facebook when he became poet laureate (in a few weeks, when his term ends, he joked, he’ll go off again), Levine said that the Internet has only provided him with a greater sense of community. He and poets across the country–Galway Kinnell in Vermont, Gerald Stern and C.K. Williams in New Jersey, Peter Everwine and C.G. Hanzlicek in Fresno–are able to read one another’s work regularly. “It’s brought us closer together,” he said. And it’s also a valuable resource. “You can’t ask your wife too often to say this is a terrible poem, because then you say something about her cooking or something, and then the day is ruined,” he said.

Right now, Levine is working on an essay for the U.S. State Department on the state of American poetry. It’s supposed to be a thousand words, but, he said, “I could do it in 10. I could do it in three: ‘It got worse.’”

In the question and answer session, subjects ranged from the Wisconsin recall to democracy in Fresno. In the end, Levine was asked to return to the question of just how darkly he sees our world, and our democracy.

“I love life. I hope that came through,” he said. “There’s a wonderful spirit in America, and occasionally we do the right thing.” And that’s where his sanguinity came in. “With all of the troubles we have there is a kind of progress. I’m sanguine about America. You know that word, sanguine? I thought I’d drop one of those, to show you I was a professor once.” 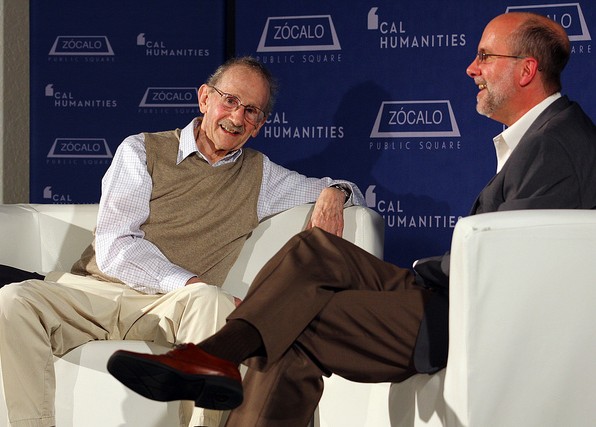