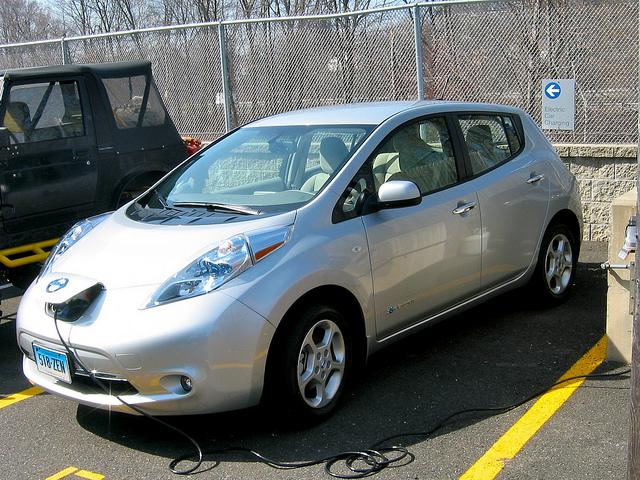 Waking up at 4 a.m. in the parking lot outside the engineering department at Cal State L.A. wasn’t supposed to be part of the ownership experience when I bought a 2011 Nissan Leaf electric car last year. But there I was on a warm summer night as my cell phone beeped with an update from the car, telling me it was fully charged and ready for another 80-100 miles of go time.

This was my fault. When I bought the “car of the future,” I ignored the best advice of the entire Nissan corporate marketing department, who loudly and regularly explained that I needed at minimum a 240-volt, level 2 charging station to charge an electric car. Instead, I decided to test the waters with the good old-fashioned regular outlet in my 1920s garage in Alhambra. Soon after, following a day of driving around Los Angeles in my day job as a realtor and to a Dodger game with friends, I found myself with a severely depleted battery and an outlet at home that would need 20 hours for a complete charge.

Luckily, the engineering department at Cal State had installed two of the 240-volt chargers, which charge the Leaf completely in seven hours. Simple solution, I thought. Stop at the college, plug in, take a nap, and wake up fully charged!

It hasn’t been quite that easy. (The car is charged, but I’m less so.) But then nothing about owning, and loving, an electric car has been.

Just getting my hands on one of these vehicles was an ordeal. The short version of the story is that, in August 2009, the charismatic and Napoleonic CEO of Nissan, Carlos Ghosn, unveiled the Nissan Leaf at the Yokohama auto show in Japan. Most car company CEOs unveil electric, hydrogen, or hybrid cars, and then allow the sales team to come up and explain that the car is a prototype that will be sold in limited markets and in limited numbers. Not Ghosn, who instead announced a global plan to build the Leaf at three factories, and to produce at least 150,000 per year.

This opened the door for me. I’d wanted an electric car since GM invested a billion dollars in the ’90s to fund the ill-named GM Impact. But GM only leased the cars to people they thought would be influencers. I begged Saturn (GM’s now dead subsidiary) for an electric car. I got no closer than a test drive in Inglewood. Then, GM, unsurprisingly, decided the market wasn’t sufficient to justify the costs despite a rabid, celebrity-heavy fan base.

But with Ghosn’s announcement, the floodgates opened. On Earth Day 2010, Nissan opened the pre-order window, and I put in my credit card numbers to pay the $99 “reservation fee” that promised me first crack at buying my very own. As the year progressed, I selected color options and trim levels, and specified that Alhambra Nissan would deliver the car.

By March 2011, I was ready for the car to arrive when word came of the massive earthquake in Japan. The tsunami shut down Nissan’s Oppama factory, put the entire supply chain in crisis, and reduced Leaf sales to 9,674 worldwide. That number was well short of the company’s stated goal–but it is still more than all the electric cars produced worldwide by a major manufacturer since 1900.

A year after my reservation, my car arrived at my local dealer. Once there, I went over the lease and purchase options with a dealership salesman. I was armed with a pre-built Excel spreadsheet created by the geeked-out mobs at a discussion forum called mynissanleaf.com. They had crunched every number and reverse-engineered the financing magic that Nissan does behind locked doors. Based on the enormous tax credits ($7,500 from the federal government and a generous $5,000 rebate from the fine citizens of California), the price of the car was two-thirds of the sticker price: $25,000 overall. That was roughly what a Toyota Prius costs and a lot more than the similar-looking Nissan Versa. But this was the future, and I was ready to embrace it.

Keys in hand (or pocket-there is no ignition in the Leaf) I was off on my great electric adventure.

For the first few months I tried my best to kill the car by putting it in circumstances that might lead to failure. Drag racing at every green light, pulling the e-brake in the parking lot to execute j-skids, running well beyond the warning lights, and depleting the battery to the point that the car protected itself by cutting off power.

Amazingly, the car kept going and became my dependable daily work car, traveling about 1,000 miles a month around town to show houses for sale. I learned the quirks of maximizing its range, when 10 miles remaining on the battery really meant 20 because the road home was downhill, and where the best free chargers were located. I also learned that relying on an electric car alone is probably not the best option for all people. Impromptu trips to the beach for sunsets and last minute invitations to parties across town require a switch to the backup car in our household.

It was a lesson, too, in how poorly planned the government incentives to build infrastructure really are. In Los Angeles, we are heavily subsidizing installations of charging infrastructure in private homes. This helps people like me, but in the long term it puts private benefits above public use. I have suggested installing public chargers at every police station and city library with some type of payment system to offset the costs, but that suggestion wasn’t met with much enthusiasm by my local city councilmen.

There is great potential for electric cars to connect us better to the city. Built into the Leaf’s navigation system is a two-way communication system that regularly updates a list of public charging stations (it also tracks my movements, but that’s another story). I’ve used a number of these stations, including at Los Angeles International Airport, where a long row of Chevy Volts, Tesla Roadsters, and Nissan Leafs vie for the seven free chargers. Most of the time, there isn’t a soul around, but the owners have developed a post-it-note-based messaging system to alert others when it is OK to unplug their cars. A typical note will read something like, “Gone to Hawaii, unplug me after 6/2 at 4 a.m.”

Charging stations at Nissan dealers have been a pleasant surprise. Some offer free wifi, coffee, and a place to work on my laptop or read a book. My favorite Nissan dealer for charging is Glendale Nissan (just off the 134), where I plug in and walk to the BMW dealership across the street. They have, by far, the most comfortable couches of any car dealer I’ve been too.

Of course, waking up to a fully charged car at home would be nice. But until I can afford the $2,000 or so needed for that 240-volt charger, you can catch me behind the engineering building at Cal State LA listening to Dodger Talk on the radio. The engineering students and I will be waiting for you!

Adam Bray-Ali is a realtor in Pasadena.