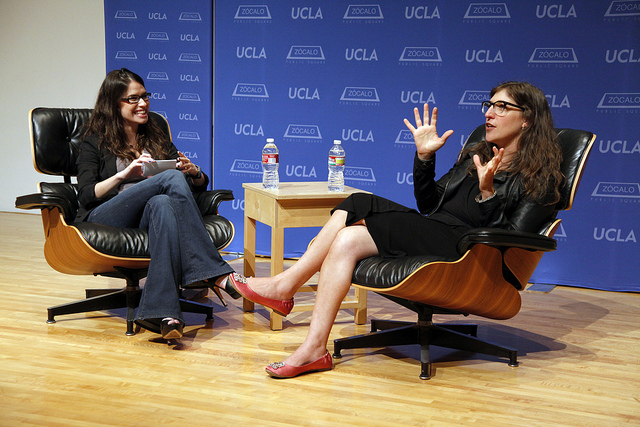 Mayim Bialik is at the very least a triple threat. She’s an actress who stars on CBS’s The Big Bang Theory as Dr. Amy Farrah Fowler (she is also known for playing the title role on Blossom in the 1990s); she’s a neuroscientist who received her Ph.D. from UCLA, where she wrote her dissertation on the genetic disorder Prader-Willi syndrome; and she’s the author of a book on parenting, Beyond the Sling: A Real-Life Guide to Raising Confident, Loving Children the Attachment Parenting Way. She’s also a mother, a wife, a proud Bruin, an “observant-ish” Jew–and most recently even a songwriter who’s written four songs in the past two years. (They’re “sad, sad songs,” she said.)

At an event co-presented by UCLA at MOCA Grand Avenue, Bialik talked with Huffington Post science correspondent Cara Santa Maria about how she weaves the many threads of her busy life together–and how they sometimes come into conflict.

Bialik became a neuroscientist in part because of her role on Blossom. She didn’t become an actress until she was 11–late for child actors, who usually start as infants–and while in traditional public school she wasn’t particularly interested in science. It was a subject for the boys, and she remembered the one girl in her class who excelled in math and science being “teased mercilessly” for it. “I was different in other ways,” she said, recounting being teased for her nose and her name. But at age 15, Bialik had a biology tutor on the set of Blossom–a dental student at UCLA–who gave Bialik a female role model and helped her realize that she had an aptitude for science. 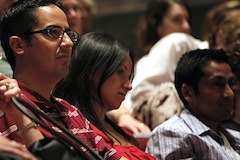 After finishing Blossom, Bialik “fell in love” with the study of neurons as an undergraduate and went on get her Ph.D. at UCLA. She had her first son while she and her husband were both in graduate school. Coincidentally, she had been studying the hormones of labor, breastfeeding, and human bonding for her thesis, and when it came time to bond with her newborn, she realized she needed a lot of time to be a parent. Going back into show business was an easy decision. “I figured actors never work,” she joked.

Although Bialik has left science as a career, she still plays a scientist on TV. Santa Maria asked the actress if she considers herself a role model for women in a traditionally male field. “In terms of being a woman who is confident in science, absolutely,” Bialik answered. But being a scientist and a mother at the same time is hard. “It’s difficult to work in an industry that doesn’t understand [motherhood],” she said.

Bialik’s character on The Big Bang Theory, Dr. Amy Farrah Fowler, is a neurobiologist who has difficulty with relationships, both romantic and otherwise. “I’m less socially awkward, but on the spectrum I’m definitely socially awkward,” said Bialik when asked to compare herself to her character onscreen. Nevertheless, Amy is “very confident in her intellectual capability and in her social capability.” 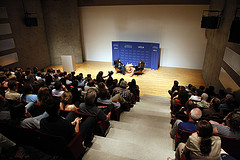 Bialik is sometimes consulted by the writers and producers of the show–many of whom have a background in science–to correct scientific facts and help make props look more realistic. “I don’t try to rub my neuroscience brain in people’s faces,” she said. But she has carved the fourth ventricle into human brain dissections depicted on the show. She recalled one memorable scene “where I’m dissecting, and I take a bite out of a pickle” as she and Sheldon, her boyfriend on the show, “were talking about sexual arousal.”

Bialik appreciates how Amy and Sheldon’s relationship–they take things so slowly that after two years, he thinks hanging out in her apartment after dark is progress–has brought courtship back to Hollywood. “It’s a part of relationships that’s lost for most young people unfortunately,” she said. She also likes how the show depicts the friendship between her character and Penny, the pretty girl who’s depicted as popular but less intelligent. “There’s places where everybody feels less-than; there’s places where even the pretty girl isn’t in her element,” said Bialik. “I think it illustrates an interesting point–that adulthood levels the playing field in certain ways.”

Bialik’s parents are the children of immigrants who left Eastern Europe just before the start of the Holocaust; she dedicated her dissertation to her grandparents. “It’s a really profound sense of humility I feel like I operate under,” said Bialik, who spoke of her gratitude “to whatever forces brought my family together.” 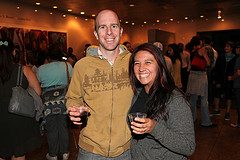 In the question-and-answer session, audience members asked Bialik to talk more about her parenting style, her book, teaching neuroscience to kids, and being a vegan.

Much of Bialik’s writing concerns attachment parenting–which emphasizes natural birth and breastfeeding–and she has become an unofficial spokesperson for the parenting style. Her research as both a mother and a scientist informed her writing and her book, she said, and studying how other primates bond has influenced her thoughts on the subject.

Asked how she recommends getting children excited about neuroscience, Bialik had a simple piece of advice: “gory pictures of brains.” She added, “Generally boys love pictures of the brain and girls are freaked out, but they want to look too.”

Despite the gore, Bialik is a long-time vegetarian and a more recent vegan. Why did she choose to become a vegan, asked an audience member, and what was it like to study in a field where animals are often used in experiments? Bialik said she originally cut out dairy when her son became allergic through breast milk, but then her own health improved too. A long-time animal lover, she was also inspired by Jonathan Safran Foer’s book Eating Animals. She also chose to go into a neuroscience field where she wouldn’t be working with animals.

“The reason I love neuroscience is because it absolutely lives and breathes in every single moment of my life and of the world,” she said–from how she forms sentences while speaking in public to how the audience hears her. Plus, it helps her psychoanalyze the people she works with every day. “I live as a scientist now, even if I never work in science again,” she said.

Watch full video here.
See more photos here.
Read thoughts from experts in pop culture on whether contemporary TV has made being a nerd cool here. 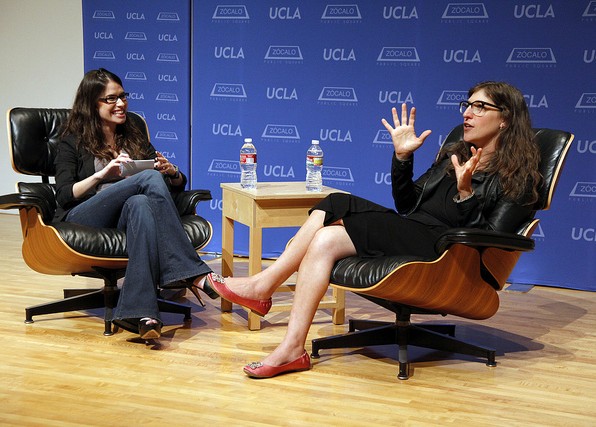