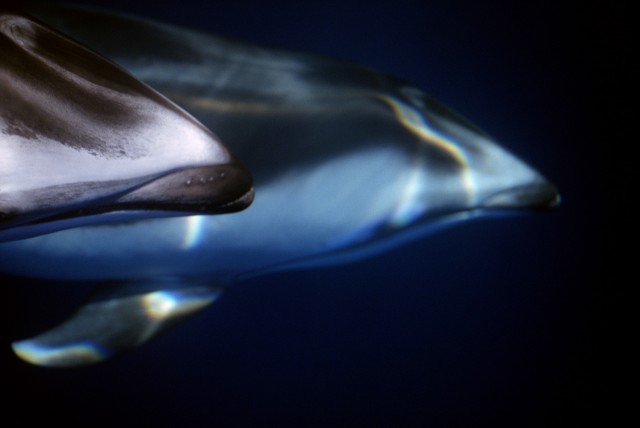 I turn the research boat offshore toward the outer reaches of Santa Monica Bay and deeper water. Flocks of western grebes float on the ocean surface, clustered as if they might be attending a convention. Brown pelicans soar in ordered formation. My research team is silent, scanning the surface for some sign, any sign–an odd wave pattern, a flurry of seabird activity, a blow of a whale, or a dark fin emerging from the surface. A California sea lion pops its head up like a submarine periscope, looks at us, and quickly disappears.

We’re now in the blue desert of the ocean. Far off, we can barely make out some ruffling of the surface. We turn toward the disturbance in search of life. At first, we see what only appear to be whitecaps but, drawing nearer, we spot hundreds of small fins. They are short-beaked common dolphins, and a dozen of them glide toward our research boat to ride our bow wave. It’s the beginning of another great day in the company of dolphins.

More than 10 million people live in Los Angeles, but few know that the local waters of this metropolis are frequented by a rich variety of cetacean species. There are bottlenose dolphins traveling at a snail’s pace near shore, short-beaked and long-beaked common dolphins socializing and foraging just a couple of miles offshore, and Pacific white-sided dolphins porpoising near Malibu. Gray whales pass here on their journey down to Baja from the icy waters of Alaska, and, at times, fin, humpback, and endangered blue whales stop in for a krill lunch a few miles off the busy shores of the City of the Angels. There are sea lions resting on almost every buoy in the bay, and harbor seals balancing their chubby bodies on sunlit rocks a stone’s throw from the noisy traffic of the Pacific Coast Highway.

I have been in company of these animals for more than 15 years in the bay, following their everyday movements and observing their behavior. I feel at home with them. They are in my life and sometimes my dreams. These creatures are no longer merely the objects of my studies. They are individuals known to me not only for their distinctive scars and dorsal fin notches but also for their personality and emotions.

People often ask me if dolphins feel what we feel. The short answer is yes. I’ve been compelled by witnessing the compassion of a mother taking care of her calf or a dolphin grieving for hours, even days over the death of a companion.

And over time, I’ve come to see them as the intelligent creatures they are. If one looks at the dolphins’ ability to learn and transfer information; to communicate; to remember and imitate; and to develop strong bonds and care for their young, one will realize that they are not only similar to great apes, but also to us. The similarities between dolphins and our species are striking. We are more alike than we would like to believe.

The more I come to know these magnificent animals, the more I understand how little I know of their everyday complex and social lives. But I do know enough to be increasingly worried about the impact we humans are having on the ocean, and how we will affect the future well-being of the dolphins who call it home. After all, living in Los Angeles, Santa Monica Bay is part of our home, too.

Maddalena Bearzi is founder of the Los Angeles Dolphin Project in California, cofounder of the Ocean Conservation Society, and coauthor of Beautiful Minds: The Parallel Lives of Great Apes and Dolphins. Her most recent book is Dolphin Confidential: Confessions of a Field Biologist (Chicago University Press).