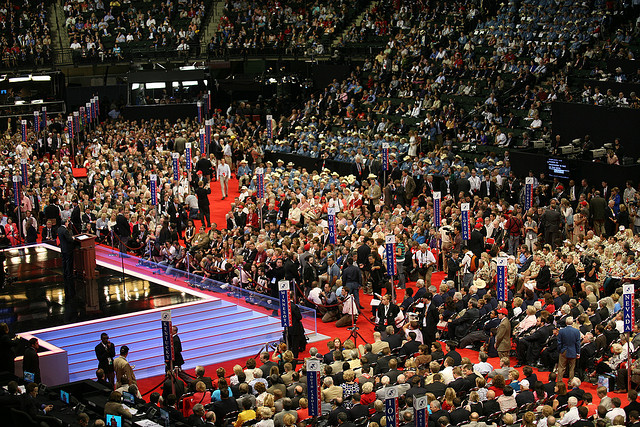 I’m not going to the Republican National Convention this year.

Truth is, I wasn’t invited. I’m a Republican by registration and a political strategist by profession, but it’s been years since I worried about becoming a delegate, joining the right mailing list, or taking sides in an intra-party skirmish. If you’re not completely controllable, don’t expect an invitation.

Not that I’d accept it.

I grew up in a politically aware Mexican-American family in Ventura County. My parents were Democrats, but, as I grew older, I started to wonder why they weren’t Republicans. They believed in private charity, self-reliance, and social responsibility. They rejected identity politics. I was conservative, but they were even more conservative. So I took the leap for them and became a Republican. (They joined me some years later.)

In the 1990s, I studied international politics at Georgetown University in Washington, D.C. and wrote my thesis on Latino voters. Very few people had grasped the implications of the demographic changes that were afoot, and I argued that the increase in Latino voters would have a major impact on our politics.

By 2000, this had become self-evidently true, and I was excited to see the Republican nominee, George W. Bush, make such an effort to open the doors of the GOP to Hispanic Americans. By this time, I had become active in Republican politics, and, at age 26, I had become the political director of the California Republican Party. In the summer of 2000, I made my way to Philadelphia to attend the GOP convention, my first.

Conventions are massive productions, and when a city the size of Philadelphia is taken over by tens of thousands of politically engaged Americans it’s an awesome spectacle. Not even sporting events can match the intensity of feeling in the air.

One of the best political speeches I’ve ever heard was given by Dick Cheney–yes, Dick Cheney. It’s hard to give a bad convention speech when everybody in the stands is wearing your jersey.

It was fun to see every major Republican wandering about in one place or another. If Washington is Hollywood for ugly people, then party conventions are the Oscars for ugly people. George W. Bush accepted the 2000 nomination in front of a growing party–and a united one. Americans, too, were more united then.

Then 9/11 happened. Although we were united in fear of other people, the country became divided. Our divisions dried in cement. We couldn’t even get along in wartime. My efforts to bring Latinos into the GOP fold came to naught as the immigration debate got uglier and uglier.

I’ve stayed in politics, and I’ve remained a Republican. (No, I’m not one of those disaffected Republicans publicly pouting about the direction of the party. Everything about the current group in the White House reminds me of why I became a Republican in the first place.) But I haven’t attended a convention since Philadelphia. The year 2000 was the last time both parties were seriously attempting to reach beyond their electoral base. It was also the last year we had a large swath of undecided voters.

Today, our politics are as ugly as I’ve ever seen. I see our commander-in-chief–the man overseeing a war in Afghanistan–suggesting Republicans have launched a war on women. I see an ad campaign suggesting Mitt Romney killed someone as a result of his business practices at Bain Capital. I see Hank Williams Jr. telling a cheering crowd, “We’ve got a Muslim president who hates farming, hates the military, hates the U.S., and we hate him!” Every Chick-fil-A is a battleground in a bigger war of us against ourselves.

Campaigns are stoking this sort of rhetoric because undecided voters have left the building. According to one recent poll, they make up around 3 percent of the electorate. Swing voters won’t swing the outcome anymore. That means national conventions aren’t about persuading people in the middle; they’re about riling up the base. As if the country needs more of that.

Of course, national conventions haven’t decided anything of substance for generations. But they were important as infomercials. Because they were targeted at the flexible middle, which used to be at about 20 percent, nearly all Americans felt they should at least tune in (or pretend to tune in–no longer an option with the major TV networks declining to cover most of the convention). Conventions marked a time to start forming an opinion on where we were going to go next as a nation. Today, no one’s changing his mind about these things.

So, given all this, why would I want to go? What possible positive role can the speeches and cheering in Tampa play as the 2012 races reach the home stretch? I’m still a political strategist and activist, but I don’t work for candidates anymore. I prefer ballot initiatives and other campaigns that allow me to choose my issues and try to persuade people according to specific merits rather than team loyalty. I’ll be rooting for Mitt Romney this week, but I’ll be thousands of miles away.

These days, a lot of Republicans believe the end is nigh because we’ve invited the wrath of God, while a lot of Democrats believe the end is nigh because the globe is going to melt. Everyone would rather be right about how the world’s going to end than work together with the other side to try to save it. Is that our future? I hope not. I hope the level heads come back. I hope we’ll regain some civility in our debates and our politics. If so, you might even see me on the convention floor.

Mike Madrid is a Republican political consultant and a nationally recognized expert on Latino voting trends.