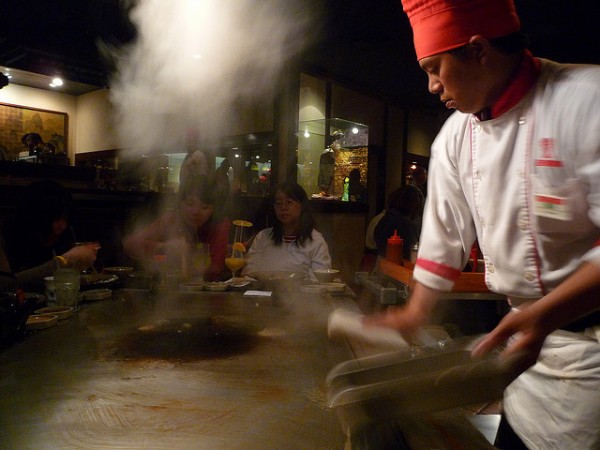 Los Angeles has given the world In-N-Out Burger, The Cheesecake Factory, California Pizza Kitchen, and, most recently, the Umami phenomenon. L.A.-based chef Sang Yoon has already given us Father’s Office gastropubs in Santa Monica and Culver City; could more locations–or an expansion of his newest restaurant, Lukshon, be on the way? In advance of Yoon’s visit to Zócalo, we presented a few worthy Angelenos with a challenge: You have several million dollars at your disposal to start up a new restaurant chain in L.A. What is its name, what does it look like, and what’s on the menu?

Having just returned from a belated honeymoon to Bali and Hong Kong, I have tropical on my mind. In Bali, decked-out clubs like Mozaic Beach Club and Potato Head Beach Club on Seminyak Beach, which offer a beach and pool paradise–without the expense of staying in a hotel–are all the rage. My L.A. take on these restaurants would be decorated with teak beds with flowing white curtains, authentic rattan chairs with colorful batik cushions, and glowing candle-lit globes that create a sybaritic Garden of Eden. Brazilian, Cuban, Jamaican, and Haitian music–plus the Beach Boys–would soothe the soul (or create the mojo) and whet the appetite. The food would be beach cuisine from around the world: camarones enchilados from Cuba; satays from Southeast Asia; papaya salad from Thailand; seafood paella from Spain; crispy cod fritters from Portugal; tzatziki, hummus, and pita from Greece; different tagines from Morocco; ceviche from Peru; fish tacos and burgers from Southern California; cioppino, the fish stew from San Francisco; crusty thin pizzas from Napoli; lobster rolls from Maine … You get the idea. These dishes are to be consumed with vast quantities of mojitos and daiquiris from Cuba; margaritas from Mexico; piña coladas from Puerto Rico; the best chilled rosés and Chablis from France; caipirinhas from Brazil; mai tais from Hawaii; and of course, ice cold beers from around the world. The name, inspired by L.A.’s iconic beach movies? Gidget’s HideAway.

Olga Garay-English is executive director of the City of Los Angeles Department of Cultural Affairs.

A few of my favorite things

After considering and discarding a few ideas–a Hungarian restaurant (I’m desperate for good langos in L.A.) and a Korean sandwich shack (an idea I had long before the Kogi truck and wanted to call the “Kim Jong Grill” or “DMZ: Delicious Meaty Zone”)–I realized my restaurant chain needed to have broader appeal. Thinking about my favorite foods, I reduced them (like a veal bordelaise sauce) to three fundamental genres: sandwiches, pie, and beer.

I would feature a rotating assortment of seasonal fruit pies and basics like banana, chocolate, custard, and pecan. I’d offer a few specialty pies each month. (My marzipan, dark chocolate, and pear tart is a family favorite.) I’d also serve savory pies like a classic pot pie, a lamb shepherd’s pie, a chili-mac pie (that’s mac ’n’ cheese topped with chili), and my specialty, a turkey curry pie (my post-Thanksgiving staple).

Each brick-and-mortar location would have anywhere from a dozen to 50 local and craft beers on tap. It would be an upscale fast-casual joint, hitting the same price point and targeting the Mendocino Farms and Tender Greens crowd.

The name? SPB. Scrumptious. Primal. Beguiling. If you know anyone who wants to make SPB a reality (I’m talking to you, Evan Kleiman), call me.

Elina Shatkin is a senior editor at Los Angeles magazine. Previously, she was a restaurant critic for LA Weekly and a staff writer for the Los Angeles Times. She is inordinately fond of bacon, dogs, bicycles, and unicorns.

One thing I’ve learned in six years of writing about food: if you’re hanging out (and making enemies) with restaurant industry folk, keep your good ideas to yourself. That said, I’d put my millions on this: a Comida Corrida joint.

Comida Corrida is the working man’s prix fixe menu, a four- to five-course meal that is usually eaten for lunch all over Mexico. It typically includes a huge Styrofoam cup of agua fresca, a vegetable soup, soft tortillas, a seasoned pasta, a meat stew, and a light dessert. A comida corrida is always du jour, filling, and made available for around 40 pesos. Its allure lies in the home-kitchen flavor imparted by the grandma who cooks it and the wild card aspect of a menu that changes daily.

My restaurants would be minimalist, with maybe a few earthy, industrial tables with padded seats and hamacas available for the siesta afterward–a Mexican American’s take on Mexico’s traditional fondas. They’d have take-out and sit-down service, a chalkboard with the day’s only menu (including an accidentally vegan Mexican dish for vegetarians), and they’d serve pulque at the bar from our very own Cabral Maguey orchards.

Javier Cabral is responsible for TheGlutster.com (formerly Teenage Glutster), a food, booze, music, and general desmadre blog. He is currently a half-time student at Pasadena City College and freelances for Saveur Magazine and LA Weekly.

Such a generous investment presents the perfect opportunity to communicate the wonders of science through food in an experimental restaurant chain (with no stipulations about making a profit …).

What it looks like: The main restaurant design is crisp and minimal with a smattering of scientific accessories like whiteboards, centrifuges, and microscopes. While you’re waiting for your food, you’re invited to partake in The Daily Experiment, a simple lab exercise that teaches diners about the food they’re about to eat. You may even be able to meet one of the Visiting Chefs who drop by to make use of our equipment and try something new. There is also a reading section where you can sit and enjoy an espresso while perusing books on the scientific aspects of crema or how to craft a flaky piecrust. Mobile satellite restaurants–think a cross between a food truck and a bookmobile–also contain microscopes and help spread the joy of being curious about food.

What’s on the menu: Dishes are crafted to make you think about the molecules we eat. Fresh cheese is made at your table and served with an accompanying microscope–isn’t it amazing how our food assembles itself? Norwegian-farmed salmon is served alongside wild Coho, and is delivered to your table with a mini-lecture on the origins of these fish and their environmental impact; which do you prefer? You can also choose from a selection of simple, delicious foods, such as cherry pie with the flakiest piecrust (step-by-step instructions are available to take home), and seasonal cocktails, such as a nectarine old-fashioned infused with thyme by nitrous-oxide pressurization, a method for breaking apart individual cells that we have been optimizing in the lab.

Amy Rowat is Assistant Professor of Integrative Biology & Physiology at the University of California, Los Angeles. She is also founder and director of Science & Food, a non-profit organization dedicated to promoting knowledge of science through food, and food through science.

A place to gather

Being asked to put together a new restaurant chain makes me feel like a four-year-old being asked to describe her dream house–there are so many things I want to include that my house would quickly become a multi-turreted, swimming-pool-laden monstrosity sure to tumble into the Pacific at the first sign of a quake. I want local ingredients! Well-crafted cocktails! Cheap beer! Healthy food! Comfort food! Fancy ingredients! Affordable meals! Mashed potatoes served sculpted just like the ones in Close Encounters of the Third Kind! (Topped with Teri Garravy.)

But in some ways, the menu is less important than the rest of what the restaurant serves up. I’m less interested in the type of restaurant Los Angeles might “need” to fill a culinary gap, and more more interested in a restaurant we could use--a place where people can come together and visit without feeling rushed, a place that encourages conversation.

Thus, my restaurant chain is called Gather–a term that can be applied to both people and seasonal food. I’m imagining a beer-garden-style space–big and open, but partially roofless so it never gets too loud. There are board games available at the bar but no TVs. I’m not going to be the jerk who bans cell phones, but I won’t complain if one location is built at the base of some beautiful, reception-blocking hills.

And while I’d want Gather to be inclusive and fun, don’t worry–the restaurant wouldn’t actually serve punny foods like Teri Garravy. Unless it’s Philip Seymour Stroganoffman, because how could that not be awesome?

Meg Favreau is a food writer, a comedian, and Senior Editor of the frugal living and personal finance site Wise Bread. She is also the author of Little Old Lady Recipes: Comfort Food and Kitchen Table Wisdom (Quirk Books).