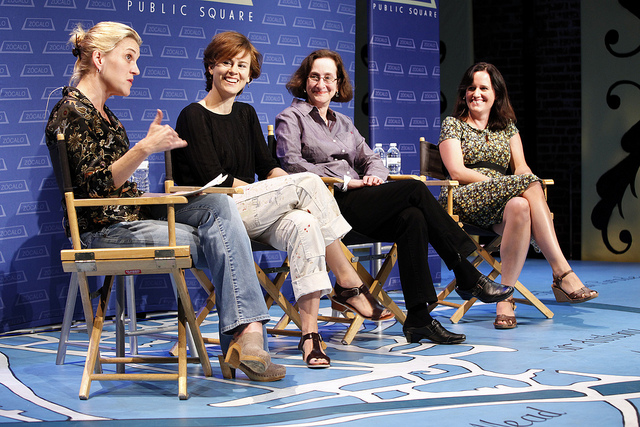 Introducing the program “Can Women Be Funny?”, Los Angeles Times columnist Meghan Daum, the evening’s moderator, joked that the original title was “Are All Women Bitches?” But that question, she said, “was more polarizing, so we stuck with this.”

Daum opened the conversation, which took place at The Actors’ Gang in Culver City, by asking whether women can carry a big Hollywood movie—or if something like Bridesmaids is an anomaly.

Lisa Zeidner, author of the satirical novel Love Bomb, said that Bridesmaids proved that women can make fart jokes—and if that’s all that’s required for women to be funny, “we’ve won the battle.”

But Jeanne Darst, a writer for the screen and stage, a performer, and the author of the memoir Fiction Ruined My Family, said that Bridesmaids seems like more of a symbolic victory. For every successful film by, for, and about women, how many don’t make it? Pointing to the writer/director Nancy Meyers, Darst said that even female filmmakers with a proven track record have more difficulty getting financing than their male counterparts.

Can funny women, asked Daum, be taken seriously on the page? Or do women writers with any humor at all end up with “a veneer of frivolity”? Heather Havrilesky, a contributor to The New York Times Magazine and author of the memoir Disaster Preparedness, said that it’s difficult for women to be taken seriously even if they’re just a little bit funny, but the larger question is whether women are permitted to be anything at all. “People don’t like women to get attention for anything,” Havrilesky said. “I’m kind of trying to be funny when I say that, but it’s kind of true.”

Zeidner suggested that women can only with difficulty be considered both funny and feminine. “How many women do you know who tell jokes?” Zeidner asked. For men, ritualized humor is “a male bonding thing.” But it’s not the same for women. Humor also helps men with women, but not vice versa. According to Zeidner, Freud said that the only reason to make art is to get laid—but that seems to apply to men only. “What is the female analogue for being Woody Allen and getting Mia Farrow, or for being Arthur Miller and getting Marilyn Monroe?” she asked. “It doesn’t seem seemly to make art to get laid if you’re a woman.”

Daum noted that it’s tough to find female role models who create complex, interesting humor; she finds women like Sandra Bernhard and Fran Lebowitz more interesting than, say, Tina Fey. Zeidner pointed to the writer Flannery O’Connor as an inspiration, while Darst said she admires Amy Sedaris for the risks she takes. “She does a lot of different things,” Darst said. “I don’t think she cares what people think of her.”

The panelists agreed that dealing with commercial conventions has been frustrating. Rabbit Angstrom—the hero of John Updike’s series of novels—is funny, but also pathetic, full of himself, and arrogant. Havrilesky is currently writing fiction, and she has struggled to create a similarly funny, yet unlikeable, woman protagonist. “I want to write female characters like that, but I don’t think it’s going to be that easy to sell books,” she said.

Zeidner said that people aren’t allowed to have affairs in novels any longer; she was working on a screenplay adaptation of her last novel and was told to get rid of the adultery—and to make her characters more like Thelma & Louise. “So murder is OK, but a little dalliance isn’t OK?” she said. “It’s just not a fun time for transgressive women. They’re having a very hard time being bad these days.”

It’s also tough when audiences don’t get your humor. Zeidner said that in Love Bomb, a character remarks that the only single men in their 30s in her suburban town are “autistic and still living with their parents.” In response, she received hate mail. But Zeidner believes that if a man had said that, people would consider it a brave joke. With women writers, everyone thinks the first-person narrator is the author, she said. But when it comes to men, people think imagination is possible.

Darst said that an essay she wrote about how her sisters beat up on each other while they were growing up got a lot of earnest comments online—and even chiding ones like, “I hope she’s not letting her own children treat each other that way.”

Coming back to the central question of the evening of whether women can be funny, a nun in the audience pointed to an unlikely source of evidence. “If you were in a convent,” she offered, “you would know that that answer is yes.” 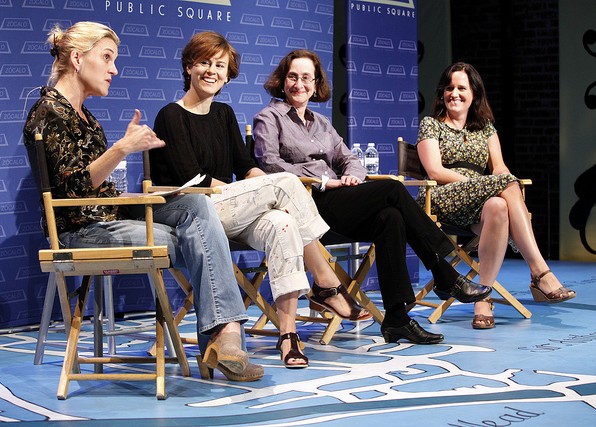 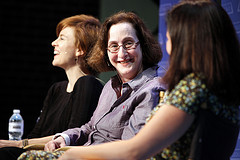 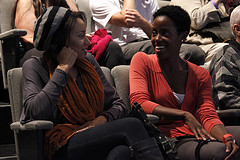 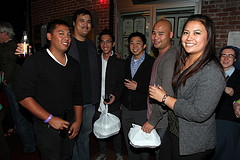