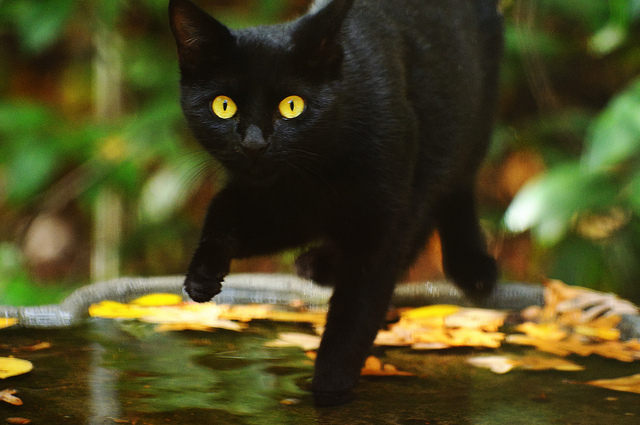 Depending on whether you tune in for The Walking Dead or prefer the antics of Here Comes Honey Boo Boo, you’ll find Halloween’s imagery either devilish or delightful. For all the pumpkins and fun, Halloween also has a reputation as “The Devil’s Birthday,” a night when innocent trick-or-treaters fall prey to anonymous psychos, and bad guys come out to play. But is that fair?

Halloween began life as a Celtic holiday called “Samhain” (pronounced “sow-in”), celebrated on the eve of October 31. It was one of the two biggest celebrations of the year for the Irish Celts—their New Year’s (“Samhain,” by the way, means “Summer’s End”), when they brought in the harvest and hunkered down for the long dark winter. Celtic mythology is filled with eerie tales of malicious sidh, or fairies, invading their kingdoms and wreaking havoc on Samhain. Heroes who could kill particularly cruel fairies would be granted favors by the Celtic King, and a mortal who happened to venture into the fairy realm on that night would find that time moved differently there (in one story a hero returns from a Samhain trip to the otherworld with spring flowers).

When Catholic missionaries arrived in Ireland, they tried to incorporate Celtic traditions into Christian frameworks. The Catholics took an existing celebration of the saints (which originally occurred on May 13), and moved it to November 1. All Saints’ Day was celebrated beginning at sundown on the 31st, and because “hallow” was another word for “saint,” the holiday eventually became known as “Halloween,” an abbreviated form of “Hallows’ Eve.” It remained a night for the telling of spooky stories.

Halloween had other influences, too. In the 16th century, when Scotland was holding witch trials, the Catholic Church had fallen out of favor, and the Protestants (who were led by King James VI, later King James I of England) were anxious to condemn anything they saw as continuing Catholic tradition, including a Catholic holiday like All Saints’. Protestant witch-hunters may have believed that October 31 was a sabbath day for witches.

If that wasn’t bad enough for Halloween’s reputation, there was also influence of an 18th-century British engineer named Charles Vallancey , who was dispatched to Ireland on a surveying mission. Vallancey, who fancied himself a historian, was smitten with Celtic language and culture, and in 1785 he published a massive six-volume collection of his studies in which he claimed, among many other things, that Samhain was a celebration of the “Lord of Death.” The only trouble was that Vallency was wrong—utterly, disastrously, wrong. He arbitrarily dismissed all previous Celtic studies showing that Samhain meant “Summer’s End” and applied his own fanciful interpretations. Nor did he seem perturbed by the fact that the Celts had no “Lord of Death”—much less a holiday dedicated to him. Although Vallancey was roundly mocked by most of his contemporaries, his studies had already found their way onto many library shelves.

Today, we tend to have different Halloween fears. Parents worry about the treats their costumed tots collect on October 31. Hospitals offer to X-ray candy on Halloween night, and experts warn about razor blades hidden in apples.

But here’s the truth: all of this is just as mythical as evil Halloween fairies.

In 1964, a housewife named Helen Pfeil grew irritated with over-aged trick-or-treaters and tossed steel wool pads and ant-poison buttons labeled “poison” into their bags. Although Helen seems to have felt her humorous intent was obvious, she was arrested for the offense. From then on, the notion of tampered treats became part of Halloween lore. In 1985, two sociologists (Joel Best and Gerald T. Horiuchi) examined 76 cases of “Halloween sadism” and found that the only two cases that had led to a child’s death had both been perpetrated by a family member. (What better coverup than to blame a stranger for having passed out the poisoned candy?)

What about danger to black cats every Halloween? Aren’t they murdered or used in rituals on October 31? Again, there’s absolutely no evidence to support this. Numerous studies have debunked claims of “SRA” (Satanic Ritual Abuse), and have found no genuine cases of diabolical cults sacrificing American kitties. Shelter officials have confirmed that they have found no evidence of abuse to black cats on Halloween. It’s a good idea to keep your cat inside on Halloween night, but mainly because masses of parading children could easily frighten him or her.

Every Halloween, new urban legends pop up like stinky weeds in an abandoned yard. After 9/11, terrorists were supposed to attack Halloween flights. Almost every year, some costumed maniac is supposedly lying in wait at college campuses (this one’s been circulating since 1968, and in one spectacular version of this tale, the madman is costumed as Little Bo Peep). “Netlore”—in which urban legends are spread via the Internet—has given us stories like one from 2008 in which gangs were initiating new members by forcing them to commit random murders on Halloween night (in this case, the story was spread largely by a single individual, but not until after schools had taken his lies seriously enough to hire extra security).

All of this is not to say that Halloween is completely safe. With any festive holiday, things can get out of hand. The Irish and Scots brought their love of Halloween mischief with them when they came to America in the 19th century. Millions of dollars were lost in shattered light fixtures and burned buildings, and by 1933 prank-playing had become so costly that many cities considered banning the holiday altogether. Fortunately, cooler civic heads prevailed and the notion of buying off the prank-players with costumes and parties caught on—and gave rise to that most beloved of Halloween institutions: trick-or-treat.

So, why all this fear at Halloween?

The answer, of course, is built into the very pumpkin-patterned fabric of the holiday. Halloween is the time of year when we acknowledge, test, and mock our fears. We go to high-tech haunted houses and pay to have monsters leap out at us; we flock to theaters for horror movies; we decorate our yards with rubber corpses and make ourselves up as vampires. It’s inevitable that some of the fears we manifest on Halloween will be less than playful, but fortunately they’re no more real than spray-on cobwebs or plastic masks.

Let’s put it this way: What’s really scarier—the pretend zombies of The Walking Dead or the real toddler in the beauty pageants of Here Comes Honey Boo Boo? Go ahead and enjoy your Halloween, because real life will always be a lot scarier.