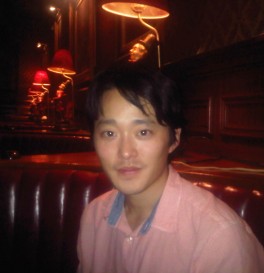 When Daniel Chun first arrived in town a decade ago, Los Angeles Magazine highlighted The Prince, a West 7th Street bar across from Ambassador High in Koreatown, as one of L.A.’s next hot drinking spots. “I think Britney or someone else had just partied here,” Danny recalls, “but this place will go to great lengths to resist becoming cool.” Danny (as everyone calls him) says this as he approvingly surveys the space during a sleepy happy hour on a Wednesday afternoon.

The Prince is known for its Korean-style fried chicken and beefeater lamps, a nod to its former life as an English restaurant, The Windsor, which opened in the 1920s. The menu boasts that it is “not uncommon to see wealthy individuals or Hollywood A-listers at this L.A. gem.” With dark wood paneling and red leather banquettes, The Prince (like nearby Taylor’s Steak House on 8th street and the H.M.S. Bounty bar in the Gaylord building on Wilshire) is the type of place you’d need to invent if it didn’t already exist, if for no other reason than to film episodes of Mad Men.

Danny, who is drinking a Johnnie Walker Black and insists we order some of the chicken, has loved The Prince since he first arrived in Los Angeles to crash on friends’ couches while trying to make a go of it as a comedy writer. Having grown up in Pennsylvania’s Poconos region, in the town of Stroudsburg, where Korean-Americans were scarce, Danny moved to L.A. after graduating from Harvard in 2002. He was shocked to discover that “being Korean here seems like a cool feature, not a bug.”

But Danny should feel grateful he didn’t quite seem to fit in growing up, as he attributes his comedic gift, and successful career, to that feeling of alienation. “I suppose that for most people who get into comedy, there is an important childhood factor—an alcoholic parent, an obesity issue, you name it—that makes you feel sidelined, that forces you to develop a keen observational sense,” he says. “For me, it was being Asian where I grew up.”

Through the end of last season, Danny was the co-executive producer and head writer for The Office, which he worked on for three seasons. Prior to that, he had a six-year stint on The Simpsons. Now, Danny has his own production deal at ABC Studios, where he is developing two comedy projects and consulting on a third, in addition to writing the script for a Warner Brothers film inspired by the Guinness Book of World Records.

One of the comedy projects he is developing is a show about an immigrant mother and her two U.S.-raised children who open a restaurant together. Danny views immigration and assimilation as underappreciated themes of American life, rarely depicted with much nuance by Hollywood.

“For most people who get into comedy, there is an important childhood factor—an alcoholic parent, an obesity issue, you name it—that makes you feel sidelined.”

“Back when Margaret Cho did her sitcom, it had to feel mainstream, depicting stereotypes that audiences would find familiar,” Danny says. But the explosive growth of the foreign-born population (and its offspring) and the fragmentation of TV audiences make it a more auspicious time for a sophisticated show about the immigrant experience.

Danny’s parents moved to America in the mid-’70s for his dad’s medical residency, and he relishes his mother’s stories of having to learn English by watching soap operas, of being homesick for the country left behind, and of being abused by grocery checkout clerks who had no time for the confusion of recent arrivals. These are everyday little struggles to which a giant wave of immigrants can relate.

TV wasn’t an obsession of Danny’s when he was in high school. “I didn’t even watch Seinfeld,” he confesses, a trace of shame evident in his tone. Nor does Danny seem like a jokey fellow: he exudes thoughtfulness rather than hilarity throughout our encounter. Only at Harvard, writing for the fabled Lampoon–a perennial feeder to Hollywood’s humor-industrial complex–and majoring in biological anthropology “because it ultimately didn’t matter,” did Danny realize that he could turn humor into a career.

Only now, Danny says, does he watch TV to decompress, “the way most people watch.” A current favorite is Breaking Bad. Earlier, when he was trying to get started, he’d watch shows to deconstruct them, analyze them. And like a lot of college students or recent graduates, he would watch with an eye toward subverting the norm. Only when you are more established can you watch the competition for relaxation and appreciate the challenge of innovating within the confines of the mainstream, which in this town means writing for networks (“where lead characters need to be likable”) as opposed to cable.

“People want good stories, no matter what, and that basically means sticking to the three-act formula that’s been around since Aristotle’s day,” Danny says, adding that “the formula is in our bones.”

The other sitcom project Danny is developing is a show about a character in his 30s who is ready to settle down but is surrounded by friends who seem eager to prolong their 20s. “The thing you have to ask yourself about any show is ‘why now?’ and I feel this theme is also timely, since it’s a cultural fact that people in their 30s are not growing up with the same speed as they once did,” he explains.

Twenty years ago, when thirtysomething was a hit TV series, there was no doubt that a show by that name should be all about kids, career, and cancer, but today, Danny explains, being “thirtysomething” isn’t necessarily about those things–for some people, it’s still about being yourself.

Danny, who is 32, is more reticent about his movie project, perhaps because it’s less his: Warner Brothers came to him with the project, asking that he work on the script. Or maybe hundreds of competitors are rushing to make rival movies based on the Guinness Book of World Records. (That last attempt at humor is mine, not Danny’s.)

Danny says he enjoys the challenge of juggling TV and big-screen projects simultaneously. Movies can be a single high concept played out in 100 pages, which is very different from a TV show in which anything too high-concept can prove too limiting. “What you need on TV is a formula that will give you stories for years and years to come,” Danny explains. “Take Friends: nothing high concept about it. Six friends in the city. Or The Office: a workplace with a crazy boss. The stories flow naturally.”

On the TV front, did he prefer writing for live actors or animated ones on The Simpsons? Pause. “Well, there is certainly more pure freedom in animation,” he says. “If you want a character to show up in a Ferrari, you don’t have to look up from your writing and inquire whether we can possibly get our hands on a Ferrari for the shoot.”

Favorite episodes he wrote? For The Office, he answers, he’d have to go with the first and last episodes he wrote, “Murder” (“a good execution of a Steve Carell episode,” in which Carell makes the employees play a murder mystery game to distract them from bad financial news) and “Tallahassee” (“proud of it as a demonstration of the show at its best post-Steve Carell”). For The Simpsons, Danny’s favorite episode he wrote was “Any Given Sundance,” in which Lisa goes to the Sundance Film Festival. He calls it an example of what The Simpsons has done best in its later years, deploying its characters to explore a unique subculture.

Danny is quick to add that while these episodes are credited to him, a show like The Simpsons has 16 writers involved, and sometimes it’s fairly random whose name gets attached to any single episode. Danny also explains that the group dynamic on a show isn’t, or at least shouldn’t be, about hashing out 16 different visions of how a show and its characters should unfold, but about working to advance the vision of the showrunner, or creator.

Danny’s top enemy, as a writer, is distraction. He won’t pretend to enjoy writing in cafés, or even at home (mercifully, he says, his architect wife is not in the industry). He likes going to work in his office on the ABC Burbank lot. You know the type: a creature of habit; meticulous.

But then this: “Driving is also this amazingly productive time.” When the going gets tough, Danny will often drive around with a voice recorder, capturing his thoughts. For true inspiration, he might even drive all the way to somewhere like Vegas and check himself into a hotel for a night or two of marathon, fully focused writing.

When I ask Danny for a “tip for the road,” he is stumped. But then he whips out his iPhone to look up a collection of nuggets of wisdom that he and the writers of The Office compiled last year on a slow day. Danny’s contributions included “Read Getting Things Done by David Allen”; “Don’t read magazines”; “Spend money on experiences, not objects”; and “Avoid subtle discouragers.”

“Subtle discouragers?” I ask, perplexed. “You know, like glass tabletops that make you tread lightly,” he explains. “Or workout equipment that has the fatal design flaw of being able to slide under your bed.” Life is full of subtle discouragers, apparently.

As for Los Angeles as adopted home, Danny has no regrets. “I am a huge advocate and defender of this city among all my friends,” he says. “If I had to choose one place to live for the rest of my life, this would be it, because more than any other city in America, L.A. is one place you’ll never outgrow.”

L.A. has a way of not caring about you, Danny adds, meaning it as a good thing. The city doesn’t smother you with a homogenizing effect, the way a San Francisco does, dictating the way you should be if you are to be from there. “L.A. is more of a resource than a culture,” Danny says. “And being from here needn’t be a cultural identifier of who you are, as we are living in this blank slate with so many varied elements to choose from.”

All that can be a little disconcerting to people when they first arrive, he concedes, but when it all starts to click, “living in L.A. is like being in on a big secret.”