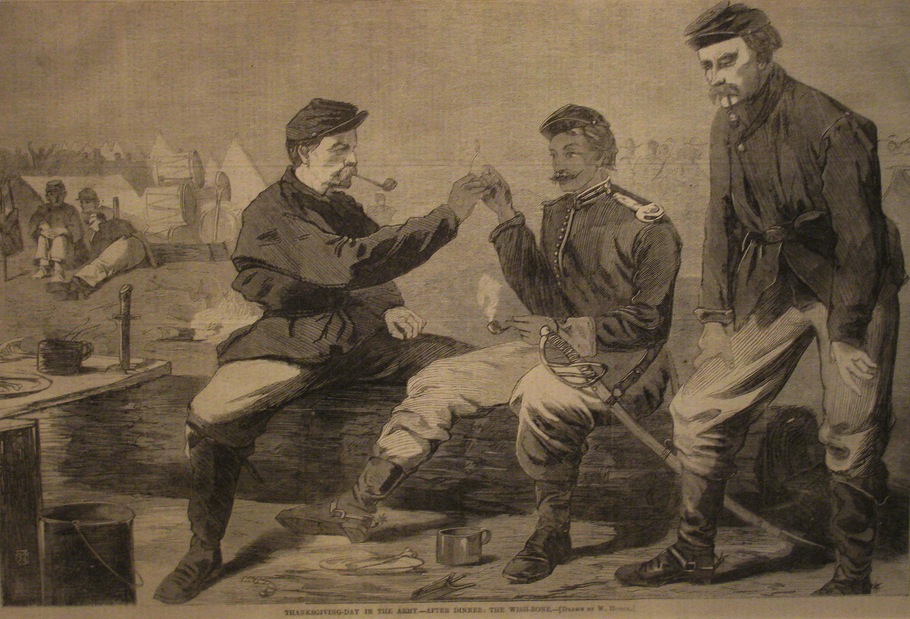 One-hundred-and-fifty years ago, while the Civil War raged, the northern magazine Harper’s Weekly ran a gushingly sentimental poem on Thanksgiving. Written from the perspective of a youthful soldier in the Union army writing home to relatives, the poem began: “Looking up to the dear old flag / With loyal hearts and true, / Do you smile to think for freedom’s sake / I am absent today from you?”

That poet acknowledged his family’s worry: “I know who name me every day / When they kneel to God in prayer / I know who search every paper through / To see if my name be there.”

But they should not worry for his sake: “I face death calmly day by day.” In the meantime, he hoped for an eventual reunion but was at least grateful to be alive: “How long before we shall meet again / In the homestead far away? / No matter, we yet live—and God is good, / And this is Thanksgiving day!”

Such dark sermonizing on an otherwise celebratory, harvest-festival-inspired occasion made sense under the circumstances of 1862, that bleakest of years for the Union in the Civil War. In sharp contrast to worried families at home and bodies strewn across battlefields, Thanksgiving was a happy, familial ideal of Jeffersonian agrarianism. The iconography may have revolved around Pilgrim Fathers and pumpkins, but, fundamentally, Thanksgiving represented patriotism—a vision of the American political family (the polity) enduring amid rapid social, cultural, and demographic change. It was an instability that Americans had felt long before war began—and would feel long after it ended.

One of the most vigorous of advocates of Thanksgiving as a standardized, nationalized celebration was Sarah Josepha Hale, editor of the North’s most popular publication for women, Godey’s Lady’s Book. In 1847, she envisioned a holiday that would unite a nation whose members might, as she put it, “be too far separated to meet around one festive board.” Thanksgiving would be a communal bond for Americans, one that they shared with no other nation. Hale was widowed in 1822, when she was barely 36, and this may have contributed to her strong sense of family values. (Today we might even call them “Victorian values,” not least since Hale, like the British queen, adopted mourning dress in perpetuity.) Hale imagined a national family that would be much like an immediate family in which every member understands his and, more crucially, her place. It was an ideal that Hale, widowed and with five children to support, could not herself achieve, but she envisaged it instead for the nation.

Through the pages of Godey’s, Hale kept up her Thanksgiving campaign for well over a decade, and by 1859 she was hardly the only writer to realize that the issue of national unity was not one that could be taken for granted. “If every State should join in union thanksgiving,” she implored in one essay, “would it not be a renewed pledge of love and loyalty to the Constitution of the United States, which guarantees peace, prosperity, and perpetuity to our great Republic?” Alongside her own editorial plea she printed a letter that outlined the main problem the nation faced and the role of Thanksgiving in its solution. The letter writer asserted that “the universal Yankee nation” could not be “consummated by appeals to national loyalty” but must instead be reinforced by “ties of blood and kindred” and “language and national observances”—national observances like Thanksgiving.

In hindsight, “universal Yankee nation” was not the most tactful of tropes to use in an argument for national unity in 1859. Yet it was very much in tune with Hale’s view that northern, specifically New England, values formed the moral core of the nation. Her novel, Northwood: Life North and South, first published in 1827 and reissued in 1852 (the same year of Harriet Beecher Stowe’s Uncle Tom’s Cabin), was sympathetic to southerners and their dilemmas but nevertheless firmly condemnatory of slavery.

The war that broke out following Lincoln’s election not only challenged the validity of the Union but brought all the moral dilemmas to a head. In 1860, Hale had pleaded in her editorial page for the “complete moral and social reunion of the people of America in 1860” through the celebration of Thanksgiving. “Would not this,” she asked, “be a good omen for the perpetual political union of the States? May God grant us not only the omen, but the fulfilment is our dearest wish!” Perhaps Thanksgiving had not come soon enough.

The war wound up giving Hale her best opportunity to achieve her long-held desire. In 1863, with the Emancipation Proclamation issued and the tide of war turning in the Union’s favor, she wrote directly to Lincoln to urge him to issue a presidential decree through which “the great Union Festival of America would be established.” In 1863, Lincoln did just that. Of course, Lincoln’s decision had less to do with Hale’s urging than with the unique circumstances of the Union at war. Lincoln’s “Proclamation of Thanksgiving,” issued on October 3, 1863, acknowledged “the lamentable civil strife” then engulfing much of the nation, and called upon the “the Almighty Hand to heal the wounds of the nation,” wounds that he related directly to Divine “anger for our sins.” Thanksgiving was now tied to the Union cause.

With his proclamation of Thanksgiving, Lincoln also wished to convey that Thanksgiving embodied ideals of sacrifice. The year of Lincoln’s proclamation was the year of Gettysburg, a battle whose aftermath was recorded by photographer Timothy O’Sullivan in his famous image of the dead, “A Harvest of Death.” The reminder that not all harvests are a cause for celebration may have been unnecessary, but the insertion of Thanksgiving and its harvests into the war surely reinforced the belief that the Union was worth fighting for. In the following year, another election year, the Union League Club of New York organized public donations for a Thanksgiving dinner to be sent into those battlefields in order, as it announced in The New York Times, that “there shall be no soldiers in the Army of the Potomac, the James or the Shenandoah, and no sailor in the North Atlantic Squadron who does not receive tangible evidence that those for whom he is periling his life, remember him.”

Eventually, years after the Union victory, the south, too, came around to the Yankee holiday and its iconography of Pilgrims and pumpkins. Today, Americans feast and joke and choose among NFL games on television—thankfully free to forget the origins of a day born of grave and urgent meditation on the meaning of America.