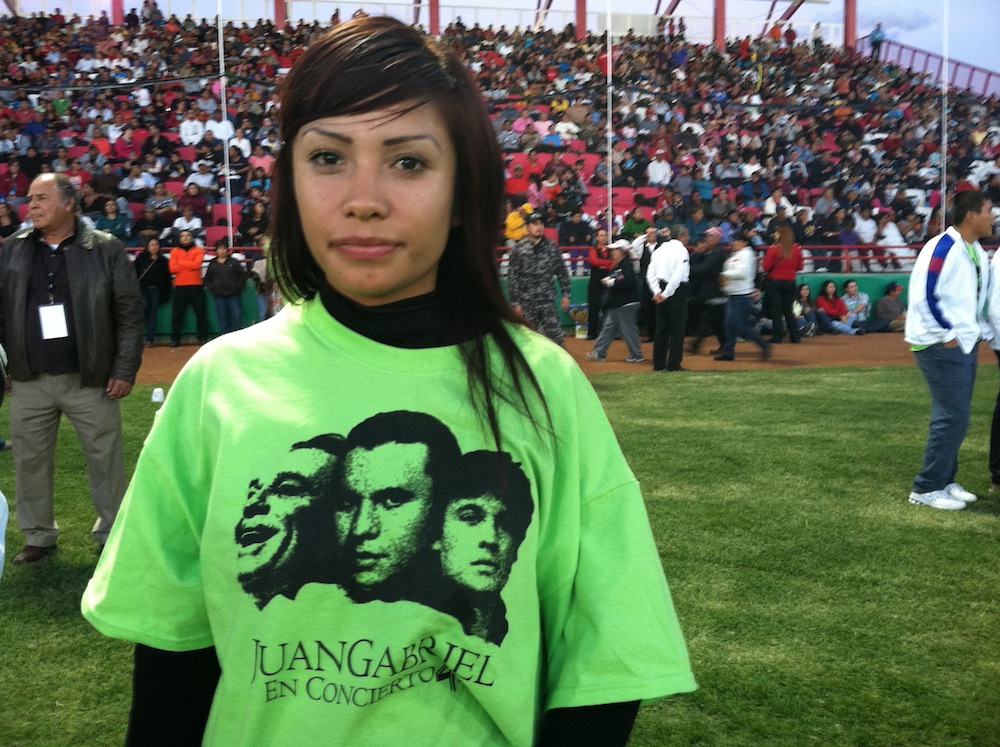 CIUDAD JUAREZ – This city, along with its prodigal son, the mega-star known as Juan Gabriel, has seen better days—we all have. The world-renowned singer with the thinning, dyed hair, wrinkles, and a few too many pounds walked forcefully on stage. Never mind that his voice was a bit raspy, his steps a bit wobbly. There he was, in full splendor, dressed in white with brown and green trimmings. Like Juárez, he was still standing.

The performance wasn’t so much about perfection as it was about redemption, reconciliation, and forgiveness for residents still grappling with so much recent bloodshed it nearly drowned them. Juárez, a city that became synonymous with murder, still reeks of death. More than 10,500 have been killed here since 2006, when rival drug traffickers started waging war for control of one of the most lucrative routes into the El Dorado of markets for marijuana, cocaine, and meth—the United States.

Much has been written in recent months about this border city’s comeback. Businesses are reopening in Ciudad Juárez; the city’s vibrant nightlife is returning. Juan Gabriel’s concert celebrated the opening of a brand new baseball stadium named “Juárez Vive”: Juárez Lives. His homecoming was for many the clearest sign yet that Juárez is indeed moving forward, that Juárez has bounced back.

However tenuous, the improved security conditions in Juárez offer some hope for a country uneasily awaiting the swearing-in of Enrique Peña Nieto as president this Saturday. Just how much has Juárez really changed—and for that matter, Mexico? What does it mean that Peña Nieto’s Institutional Revolutionary Party, or PRI, will come back to govern the country it imperiously ruled throughout much of the 20th century? Has the PRI changed? Will Peña Nieto continue the Drug War with the same zeal as outgoing President Felipe Calderón? And would that be good or bad?

Juan Gabriel’s performance was a time to reflect on the relative merits of continuity and change. Indeed, his appearance in Ciudad Juárez was akin to Elvis returning to Memphis to help heal a broken city, and somehow stitch it back together by inspiring a hope sorely tested over years of mayhem: hundreds gunned down, bodies dangling from bridges, skin of faces stitched onto soccer balls, and scores of beheadings.

If anyone could inspire the 70,000 people who packed the new stadium it was Juan Gabriel, the singer who got his start in Juárez. He, like many of us, arrived in the border city as a child, brought to Juárez by a working-class family seeking new opportunities, reinvention, and the will to overcome one’s preordained destiny.

“Alberto Aguilera is from Michoacán,” said Governor César Duarte, introducing the superstar with his given name, as Juan Gabriel’s fans anxiously waited for the governor to get off stage and let the singing resume. “But Juan Gabriel was born in Ciudad Juárez.” Indeed, some say Juan Gabriel became bigger than the infamous city itself.

Juan Gabriel raised a glass and toasted his adopted hometown: “I toast to the health, the well-being, and peace of my land, Ciudad Juárez, which is my home. And may your home, your health, your lives, and peace never, ever, again be interrupted. Here is to a long life, much prosperity.” Then, quoting one of his most well-known songs, he raised his glass higher and shouted “Arriba Juárez.”

Long before Juan Gabriel got here, Ciudad Juárez was the Ellis Island of the Southwest. People from every corner of Mexico arrived here, first as refugees of the Mexican Revolution, then as passing braceros, guest workers eager to help the United States fill jobs left vacant by American men fighting overseas. I was one of those “internal migrants” who arrived in Ciudad Juárez from the state of Durango as a 5-year-old, along with my pregnant mother and three brothers, waiting to reunite with my father, a bracero working the fields of central California.

Later, U.S.-owned assembly plants, known as maquiladoras, opened for business to take advantage of abundant, cheaper labor and the vast number of scattered workers who stayed long after the bracero worker program. The “border boomtown” became an all-too-powerful magnet for workers from poor villages across a Mexico struggling to make good on the promise of the revolution: land, jobs, and opportunities for all.

Women arrived, too, in Juárez, and took up jobs in the hundreds of maquiladoras. The workers included my cousins. They believed, like my uncle Delfino, that Mexico wasn’t cursed by history but by the betrayal of those who eventually crossed the border—people like my family, who headed, grudgingly, to the salad bowl known as the San Joaquin Valley looking for different opportunities. The so-called golden gate as we crossed over to El Paso was nothing more than the muddy waters of the Rio Grande.

Juárez then and now was a giant city, with a population of 300,000 in the mid 1960s and 1.5 million today. It was a city made up of hustling workers, not residents. It was a city made up mostly of concrete. Few parks, movie theaters, or restaurants existed for the locals who spent much of their evenings staring at a bright star on a mountain shining from across the border, on the El Paso side.

For me, Juárez was a city of many firsts. The first story I covered as an aspiring journalist. The first city where we thought we tasted the fruits of democracy, where a tall accountant named Francisco Barrio Terrazas led marches across the city demanding an end to the tiresome reign of the PRI in the 1980s. The first place I received a death threat when I tested the limits of our fledgling democracy as a journalist.

But it was also the city of first loves and songs. Before landing in journalism, I wanted to be a songwriter. When visiting from California and later when I moved to El Paso, I’d often play Juan Gabriel’s “He Venido a Pedirte Perdón” while crossing into Juárez on the Santa Fe International Bridge, as if seeking forgiveness from the world left behind. I’d make a beeline to a house run by musicians who made me believe I was the next best thing to Juan Gabriel.

Juan Gabriel’s music was always present. The most exciting night on the town entailed taking my friend and colleague Angela to the Noa Noa club, just blocks from the international bridge. It was part entertainment, part pilgrimage: this is where Juan Gabriel used to perform. The Noa Noa later became the title of one of his signature songs, and will soon re-open as a museum.

My uncle Ardolio used to drive a rutera, a van-like taxi that had been known to give a younger Juan Gabriel free rides in exchange for musical entertainment. When he made it big in the 1970s, my uncle couldn’t get used to his new name. “That’s Alberto,” my uncle would say when he’d come visit us in California and we’d see the new singer from Ciudad Juárez beam through our television sets. “Un tipazo, great guy!” he’d say as we all nodded with pride. To think that one of the Spanish-speaking world’s most successful and flamboyant stars hailed from our scruffy bordertown of nameless, hardworking people.

And so years later, here we were back in Juárez—Angela, now my girlfriend, and I, and Juan Gabriel. I’d witnessed so much bloodshed in this city, so much wasted hope. It was exhilarating, at last, to celebrate the city’s rejuvenation, at least for one night.

On our way to the concert we stopped to see Adrian Cadena and his wife, Guadalupe Dávila. A mass shooting in February 2010 killed 15 young people at a birthday party, including the couple’s son, Rodrigo. Over the years we’ve kept in touch with the Cadenas, finding inspiration in their resilience and belief that better times awaited Ciudad Juárez, that a new day was coming after a prolonged midnight in Mexico.

We brought a turkey for the couple and their surviving children and were pleasantly surprised that Guadalupe was also on her way to see Juan Gabriel. She was going with her mother, who first saw Alberto Aguilera perform at a Juárez club known as the Malibu. I asked Guadalupe whether Juárez was really back, whether Juan Gabriel was ushering in a new era, or if this was all simply part of a promotional gimmick that the PRI was orchestrating.

Juárez, she answered, was building community—“una sociedad en pañales,” a society in diapers—with the very blood of its children. “We’re no longer just workers here, but residents.”

I tried not to think about all the mayhem and death that’s besieged Juárez these past few years as Juan Gabriel thrilled the audience with all the old favorites. This evening was about feeling alive again, discovering lost innocence through song, though it did strike me that the music’s themes of lost innocence and angst—and believe me, Juan Gabriel’s music oozes angst—apply as equally to the city’s travails as they do to teenage love.

I smiled as I watched Angela and others move their hips slowly to the song “Hasta Que Te Conocí.” I, too, muttered the words, trying unsuccessfully to keep up: