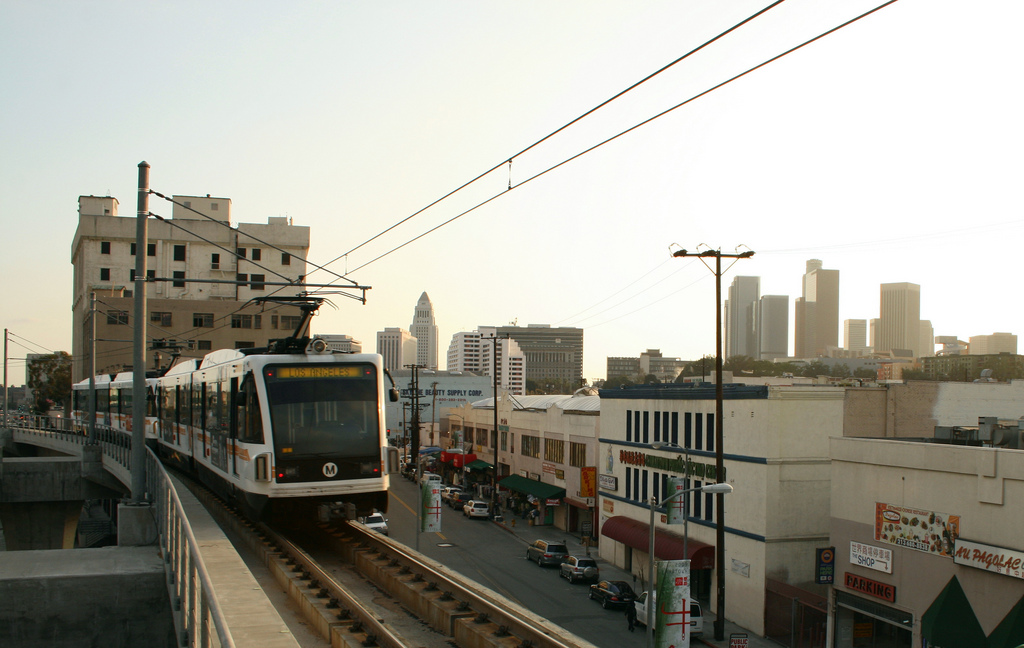 It should have been a quiet, forgettable Tuesday night at home. That’s all I wanted it to be. My wife was out of town. I had to pick up both of my boys—4 and nearly 2—from two different child-care locations, which, for very complicated, very L.A. reasons, are 40 minutes apart. I just wanted to get Ben and Tom fed and to bed early, so I could catch up on some work.

But my 4-year-old wouldn’t have it. I’d gotten to his school late, nearly 6 p.m., making him the last child picked up. “Let’s do something,” Ben said, with the air of a kid who knows how to play on working-parent guilt. He had, in fact, a specific ask: “Let’s ride the train to Chinatown and have dinner at the old restaurant.”

How does a 4-year-old come up with an idea like this? Well, we had made a similar trip before, one rainy weekend when my wife was also out of town. We live near the Gold Line stop in South Pasadena. When nothing else will soothe Ben, a train ride will. And since he’s not 5 years old yet, he rides for free. The Gold Line is cheap toddler entertainment.

OK, I told him, with a bit of dread. I felt tired. I tried to calculate the time—yes, it will keep us out a bit too late for a school night. But maybe the walking will tire them out, and they’ll fall asleep.

We drove home, walked over to the train and hopped on board.

People talk a lot of nonsense about L.A., about how it’s boring and it’s unreal and doesn’t have any true communities or centers and people don’t connect with each other and you can’t go anyplace because of the traffic. And then you get on a Gold Line train on a Tuesday night. And two women quickly introduce themselves and give up their seats so your two little boys can sit at the window.

The ride is less than 20 minutes. Ben asks about everything rolling by: the stores, the 110 freeway, the Highland Park neighborhood, the Southwest Museum, the houses in Heritage Square, and then Chinatown. We get off at that elevated station with a view of the town, and I point out the skyscrapers, the jail, and the San Gabriels.

It’s dark and cold and the streets are quiet, but stores are open. Two store owners, without much else to do, greet the little boys. So do the cab drivers on Alameda, lined up waiting for their chance to pick up passengers coming into Union Station.

The “old restaurant” is Philippe the Original, the French dip place, founded in 1908. We walk in and there isn’t a line. There is a crowd, though. Customers and staff are all intently huddled by the TV. Could the Lakers be finally doing something good? As I get closer, I see that they’re watching an old program of the just-deceased Huell Howser. And they’re riveted. Because Huell is visiting, and marveling, at this very place, Philippe’s.

Ben and Tom get cheese sandwiches, and I get the beef with a side of coleslaw. We take seats in the back, with the model Amtrak trains and the pictures of the old streetcars on the wall. There’s a map on the wall, and Ben thinks he recognizes it. “It’s the Metro train map,” he says.

He’s wrong, I tell him. It’s a map of the old Pacific Electric Railway, the train system L.A. famously lost. But Ben does have a point; the map looks a little like the maps you see on the Metro, of the train system we’re slowly building with that sales tax money. The past is reconstituting itself.

We finish eating, walk past all the people watching Huell, and head back to the Gold Line. Once on board, two people give up their seats again, and the boys are looking out the window when a beautiful, glamorous couple—they look like the sort of people who would be caricatured as snobs in an ironic movie about L.A.—introduce themselves to the boys. And soon Ben and the man are in conversation about trains, the Gold Line, and Ben’s toy trains. Tom, who will be 2 in a couple of weeks, starts flirting with the woman. He puts on the black hood of his sweatshirt; she fiddles with her jacket and unveils her own black hood. And the little boy and the glamorous woman play a game of hide-and-seek with their hoods. They are strangers in L.A., supposedly unconnected.

The South Pasadena station arrives too quickly, and we say a too-rushed goodbye to the couple. I have to carry the boys off the train, and for the first time all night, they whine. In L.A., no one ever wants the ride to end, even on a forgettable Tuesday night.

They’re both in bed, asleep before 9. As Huell would have said, isn’t that amazing?