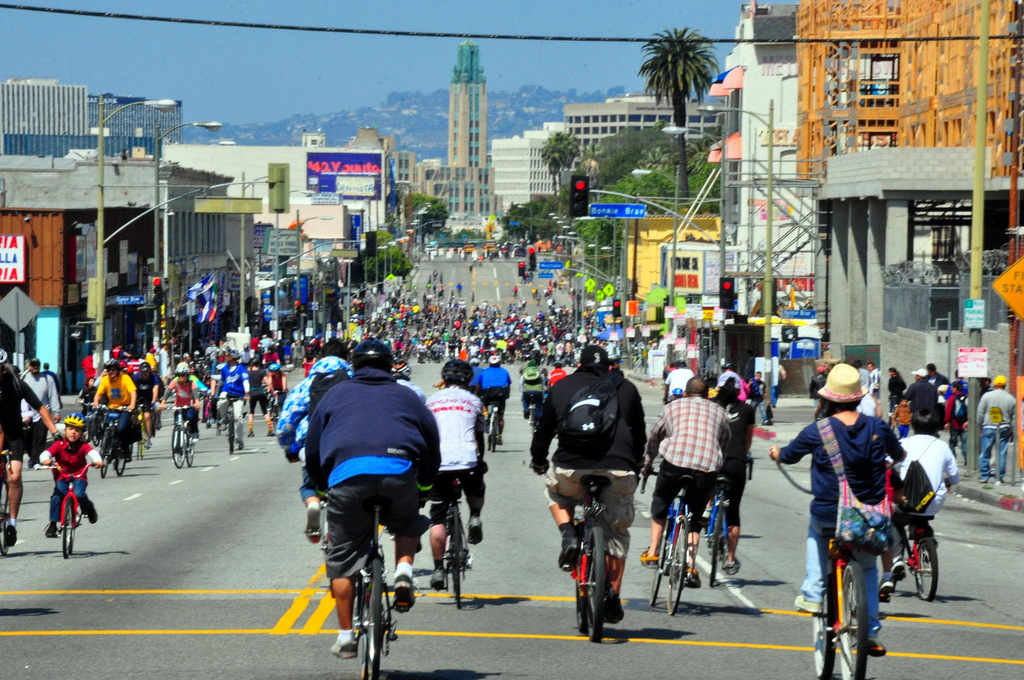 I’m a native Angeleno. I like to throw that out at dinner parties just to see if any other natives are in the room. We’re usually a small minority, because L.A. is a city of migrants, and it’s been that way since the 1880s. But I wear my native status with pride. I’ve always thought it was important to see this place plainly—for what it is—and not as a fantasy. L.A. is so incredibly misunderstood—and not just by outsiders. So many of the people who live here want it to be like somewhere else—like New York, Paris, Copenhagen, Chicago, Buenos Aires, Portland, San Francisco, or London. But that’s not what we are. We’re something else, and I’ve spent my life trying to understand what that is.

One conception, or misconception, of Los Angeles is that it lacks any public spaces like New York’s Central Park or Paris’ Champs Elysées and that life in L.A. is a succession of isolated private moments—from house to car to parking lot to mall and then back again. If you accept that as your L.A. reality, then there’s no rubbing shoulders with strangers—no chance encounter—no serendipitous moment when people come together. Millions of people think of L.A. this way and live their lives here within private bubbles. But there’s excitement in this city, and possibilities for serendipity abound—if you make room for them.

What I’ve learned firsthand is how hungry Angelenos are for civic space and just how willing and ready they are to participate in it. The challenge is to create new spaces—either as temporary interventions or as new infrastructure—and to string enough of them together to give birth to a new definition of life in Los Angeles.

Already back in 1982, when I was just a secretary at the Craft and Folk Art Museum, I learned firsthand that Angelenos would come together if the conditions were right. The museum held an annual “Festival of Masks” and would close Wilshire Boulevard for a parade and take over Hancock County Park for the weekend. That year, I met Kate Bergin, my business partner of 31 years, and together we formed a firm to specialize in precisely that sort of event: large and public and dependent on community participation. We called our firm “Community Arts Resources,” which, perhaps fittingly for this city, is also known as CARS.

Since its founding, CARS has worked on a range of programs that create new ways for Angelenos to engage with their city. We’ve been involved with the Santa Monica Festival, the Fringe Festival (the first in the United States), the ArtBus Tours of Los Angeles, the Getty Museum’s Family Festivals, GLOW in Santa Monica, Chinatown Summer Nights, the California Endowment’s Healthy Neighborhood Festival, Little Tokyo Design Week, and many other happenings.

Recently, though, I have become involved with a project that has taken our work to a whole new level. And it’s happening on a scale as big as this city. For the first time, I am getting a glimpse of what this place might look like if we allowed ourselves to believe that L.A. was the kind of city where we weren’t always divided by the protective armor of our cars.

It started in 2007, when I received a two-year Stanton Fellowship from the Durfee Foundation. The Stanton is designed to give six people a chance to come up with creative solutions to some of the major issues facing Los Angeles. My own thinking was about how to activate the public spaces of Los Angeles in a more exciting manner. The space that was preoccupying me most was the Los Angeles River.

The L.A. River connects a wide range of neighborhoods and forms the original backbone of the city, but not many people use it. I wanted to create a new large-scale festival that would radically change people’s perception of the river and its place in Los Angeles. The only trouble was that as I looked for inspiration from other river festivals around the world, I found that the rivers in question all had something in common that the L.A. River lacks: water. Or, to be fair, regularly flowing water. I met with all sorts of people, but when I asked if they knew of any river festivals without, well, a river, I’d draw blank and confused stares.

At one meeting I was talking with a planner, Jason Neville, of the now-defunct Community Redevelopment Agency. Jason listened to me as I went on about the challenges of conceiving a dry-river festival—or at least some type of urban festival for a long, linear space. He said to me matter-of-factly, “You should check out ciclovía in Bogotá.” I didn’t understand the words and asked him to repeat the sentence. “Ciclovía.” “Bogotá.”

Back at my office I Googled a Streetsblog film on ciclovía that had been released in 2007. In Bogotá, I learned, scores of miles of streets are closed off each Sunday to automobile traffic and given over to runners, bicyclists, and pedestrians. A street, or via, becomes a “cycle street,” or “ciclovía.”

All of this had started back in 1974, when Jaime Ortiz Mariño, a native of Bogotá, returned to Colombia after spending a couple of years studying in the United States. While abroad, Mariño had been taken with the antiwar movement he encountered, and now he was looking for a way to bring the excitement, energy, and passion of the American counterculture to his home country. One of the first things Jaime and a couple of friends embarked on was organizing a new type of “happening” that involved repurposing the city’s streets for a day to allow only people, not cars, to employ them, and to make them into a new type of public space. So successful was the effort that it has been replicated in cities all over the world. Meanwhile, in Bogotá, ciclovía now commands over 80 miles of car-free streets every Sunday, with at least a million participants weekly.

I was immediately taken by the simplicity and power of this idea. Why confine it to just the L.A. River? Streets are the DNA of this city. With ciclovía, any and every part of the city could be repurposed at any time. I was immediately swept up by this vision and called my wife to tell her we were going to Bogotá to check out ciclovía ourselves. She said OK. To say we liked what we saw is an understatement. We were converts.

Around that same time, Kit Rachlis, then editor of L.A. Magazine, asked me to contribute an essay for an upcoming issue in time for the beginning of Mayor Antonio Villaraigosa’s second term. In it, I suggested the city “close Wilshire Boulevard on Sundays and other contiguous boulevards to create a Ciclovía” and give Angelenos a chance “to be knitted together in a new and novel way.”

I liked my proposal, but I knew it was quixotic and that the road would be long and arduous. But shortly after the essay was published, I got an email from anthropologist Adonia Lugo telling me about her work on an ad hoc committee formed with the Los Angeles County Bicycle Coalition to explore setting up exactly this sort of event. We had our first meeting together one Sunday morning in Barnsdall Art Park near Vermont and Hollywood, and soon we had combined forces to promote a local version of ciclovía: “CicLAvia.”

By October of 2009, one committee member, Jonathan Parfrey, who was at that time director of the GREEN LA Coalition, had set up a meeting for us with Mayor Villaraigosa’s key environmental staff. Big cities can often be slow—if not impossible—to kick into gear, but to our surprise and delight the mayor and his staff immediately endorsed CicLAvia, promised to cover the city’s share of the costs to produce the first one, and challenged us to raise the necessary funds and do the work required to get CicLAvia off the ground as soon as possible.

In exactly one year, on 10/10/10, we premiered CicLAvia with 7.5 car-free miles in Downtown Los Angeles. And it was, thank goodness, an enormous success. Angelenos came out by the thousands. It was such a hit that we’ve had to expand the footprint of the route because of the sheer numbers of people on bike and on foot. There were two CicLAvias in 2011 and two more in 2012. This year, we are producing three. We are also adding two new routes: CicLAvia will run from Downtown to Venice Beach on April 21 and down Wilshire Boulevard from Downtown to Fairfax on June 23. On October 6, we will reprise our “traditional” downtown route. We hope to eventually create 12 individual routes throughout Los Angeles that will rotate monthly and activate hundreds of miles of the city on a regular basis.

So yes, Angelenos will engage with each other and with their own city if you give them the right conditions. For CicLAvia we give them advance notice, streets without cars, and, if we’re lucky, beautiful weather. They in turn hit the streets in numbers that even I, the convert, could just dream of. My longtime dream of living in a Los Angeles where people walk or bike to work, take the bus or train across town, and enjoy rubbing shoulders with strangers in public spaces was no longer just a pipe dream. In just a couple of years, CicLAvia has grown from an unpronounceable jumble of consonants to a transformative program that Angelenos look forward to with smiles. The city hasn’t been the same since—and I’m glad for that. Now I just need to get back to that dry-river festival.