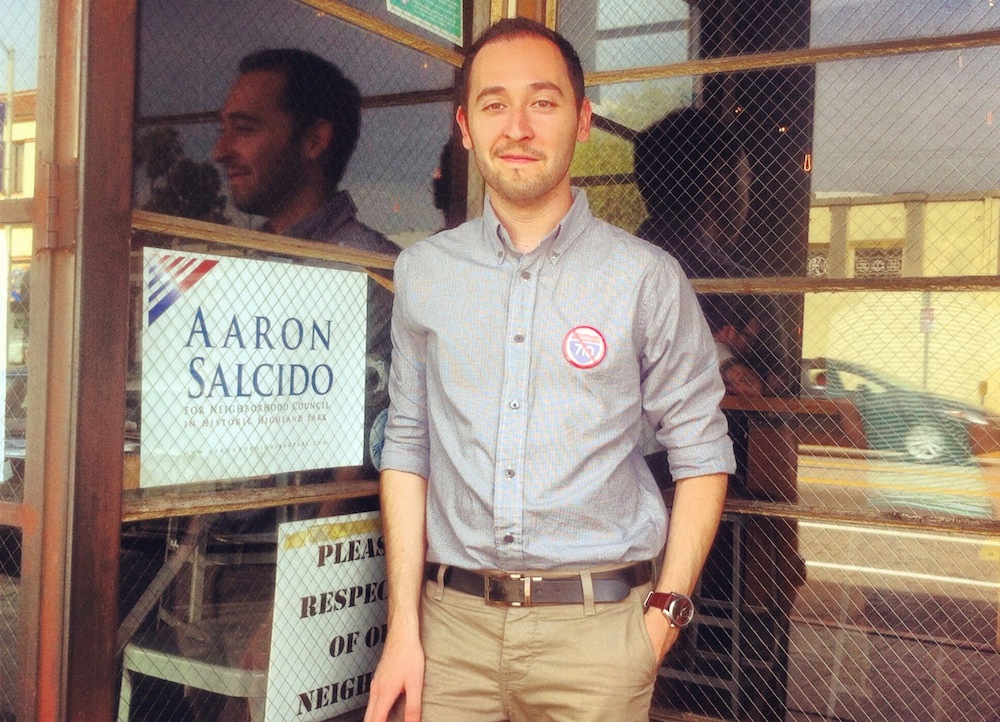 I never would have predicted that being priced out of Silver Lake would be my first step toward winning elective office. But that’s how it began. Silver Lake, my favorite place in L.A., was where I vowed I’d live and die. But when I approached 30 and started looking for a home to buy, I quickly realized if I was going to die in Silver Lake it was going to be as a renter. That’s how I wound up a few miles away in Highland Park, a quaint, sleepy village of rolling hills and charming bungalows in northeast Los Angeles.

The home I bought was a simple 1950s two-bedroom bungalow near York Boulevard and Avenue 50. Perched on a hill overlooking a little valley beneath Mt. Washington, the house had a patio on which to entertain guests and host parties. There was even a garage that I could use as an office and photography studio. It seemed perfect.

Once I moved into my house, however, I realized I’d overlooked some things about the surroundings. For one, I’d neglected to take a step back and look at my street. It was not in good shape. The pavement was broken, cracked, and uneven. Worse, there was litter everywhere. The hills of Highland Park are windy, and the gusts seemed to send every piece of old trash—empty beer cans, a partially eaten burrito, an assortment of paintbrushes—to a resting place in front of my house. In Silver Lake, we got weekly street cleaning. In Highland Park, we were on our own, and I didn’t know where to go for help. Then my neighbor suggested I try reaching out to our neighborhood council.

Neighborhood council? Like most Angelenos, I had no idea what that was. It turns out that the L.A. city charter calls for local advisory governing bodies in 95 different neighborhoods across the city. Each of those cool little blue signs you see when you pass from one neighborhood into the next—“Koreatown” or “Silver Lake” or “Westwood Village”—corresponds roughly to a neighborhood council. So when I heard about this entity I was pleased. “This is it!” I thought. “I will take my case to the Historic Highland Park Neighborhood Council and get the street services I want for myself and my neighbors!”

When I got to the meeting, though, I was, honestly, a little disappointed. I’d imagined the neighborhood council would look like a chapter of the Illuminati, with a group of executives in dark suits amid marble columns listening attentively to my demands as a voter. When I entered the Highland Park Senior Center, what I found instead was a room with rows of collapsible party tables and folding chairs. The council was made up of 19 volunteer citizens who were hard to distinguish from the audience members—all five of us. Discussion revolved around agenda items along the lines of, “Motion and discussion to direct Rules Committee to develop a general policy and procedures manual for council approval.”

This was not exciting. Still, as I sat there listening to the council discuss motions to fund various neighborhood activities—like $1,000 to donate backpacks to low-income kids or $1,000 to send local high school cheerleaders to a national competition—I sensed that these council members, in spite of personal agendas, all had in common a love of the neighborhood.

When I returned to attend my second meeting, two weeks later, the contrast was dramatic. The Los Angeles County Metropolitan Transportation Authority had proposed to route a freeway—the 710, originally intended to traverse South Pasadena—through Highland Park, requiring the destruction of hundreds of homes in the beautiful Garvanza area. The council believed Metro was trying to build the freeway in our neighborhood because the low-income, Spanish-speaking population was not likely to fight back. But fight back we did. The room was filled to capacity, with stakeholders giving testimony and activists yelling. The council unanimously voted to oppose the plans. A few weeks later, Metro, acknowledging “public input,” took all three options of the freeway extension through Highland Park off the table.

Impressed with what the council had done, I thought about how much I would like to have that sort of impact. My parents had always taught me that it’s easy to complain about things from the comfort of your couch, but it’s another thing to get up and actually work to make change happen. Then, as if someone had heard my thoughts in that moment, the council proceeded to announce upcoming elections to seat a new board in the fall. I knew I had to run.

My best friend, Brandon, who lives in Highland Park and is a graphic designer, became my de facto campaign manager, drawing up posters and flyers for outreach. I went to the businesses on my beloved York Boulevard and asked for support and for votes. Most were friendly, and their requests mirrored my own: improve trash removal and beautify their street. Almost all of them let me put my posters in their windows. I also canvassed for votes at the weekly Taco Truck Tuesday event in the parking lot at the corner of Figueroa and York, and to my surprise, people pledged to come out and vote.

My campaign wasn’t always smooth. One day, as I was finishing up canvassing, I walked past a tattoo shop and heard a voice call me back. It was the owner, a tall, middle-aged white man with a shaved head and tattoos all over his body. If you’re expecting to read next that beneath the rough exterior was a friendly soul, then you’re mistaken. He was unimpressed by my campaign and started shouting that he hated “all this hipster shit happening in my neighborhood,” hipster shit that included myself. I thanked him for his opinion and said I would work to earn his vote if elected. There was also the young woman who insisted that I support eliminating the LAPD in its entirety, and when I pointed out why I couldn’t, she curtly dismissed me from her presence. But for every one of these outliers, there were 10 more people who were supportive. I probably spoke to about 200 people over the course of two months of campaigning.

My big moment in the campaign spotlight was at a candidate forum at the Franklin High School cafeteria. All 30 or so Highland Park residents running for the 15 “At Large Director” seats were invited to field questions from the community. The room, a classic high school cafeteria with hand-painted posters for various school clubs on the walls, was nowhere near capacity, with only 50 or so people attending. Each candidate had 30 seconds to answer a question, and, by the time the microphone reached the last candidate, there wasn’t anything new to say. I advocated addressing the crime problem in Highland Park and spoke of the need to create an inviting environment for small, local businesses. Did anyone listen? I like to think so, but I’m not delusional.

Election day finally came on October 27, 2012. I got up early to cast my vote alongside friends and family who came out to support me. The polling place was full of volunteers, including some outgoing board members who wished me luck. The results were to be published as soon as the polls closed and votes were counted, and I refreshed the browser on my iPhone more times than I care to disclose. Finally, at 11 p.m., I saw the results. I’d won a seat! As for the tally, 328 people had come out to vote, and 203 of them had cast a vote for me. I was elated.

Today, with three months of being a councilmember under my belt, I cannot say my job is glamorous—or free of hassles. We meet on the first and third Thursdays of each month. The meetings begin with a roll call, and then we follow an agenda that is crafted with motions and topics contributed by councilmembers over the course of the last two weeks (or tabled over from the prior meeting if there was not sufficient time). The agenda includes time for the local City Council representative (or a deputy) to speak, and there is sometimes a guest speaker from the city. As public officials, we are subject to several statutes that ensure fairness and openness to the public, including the Brown Act. I’m not opposed to these statutes, but they place a limit on how much we can accomplish. For example, we can’t discuss items that haven’t been publicized to the stakeholders at least 72 hours in advance, meaning we can’t discuss late-breaking developments. Things tend to move glacially.

Still, I’m happy. The council helped sponsor a toy drive and Pictures-with-Santa day around Christmas for the underprivileged children in our neighborhood. I helped run the photo booth. I’m spearheading an effort to put on an event called “Taste of Highland Park” to raise the profile of the great eateries in our neighborhood. When I first reached out to the neighborhood council, it was in service of my own private agenda. Now I find myself in a position to serve Highland Park and work to make it a better place. And if we’re successful as a council, we’ll make it better than the neighborhood I recently had to leave behind. Silver Lake, it’s on.