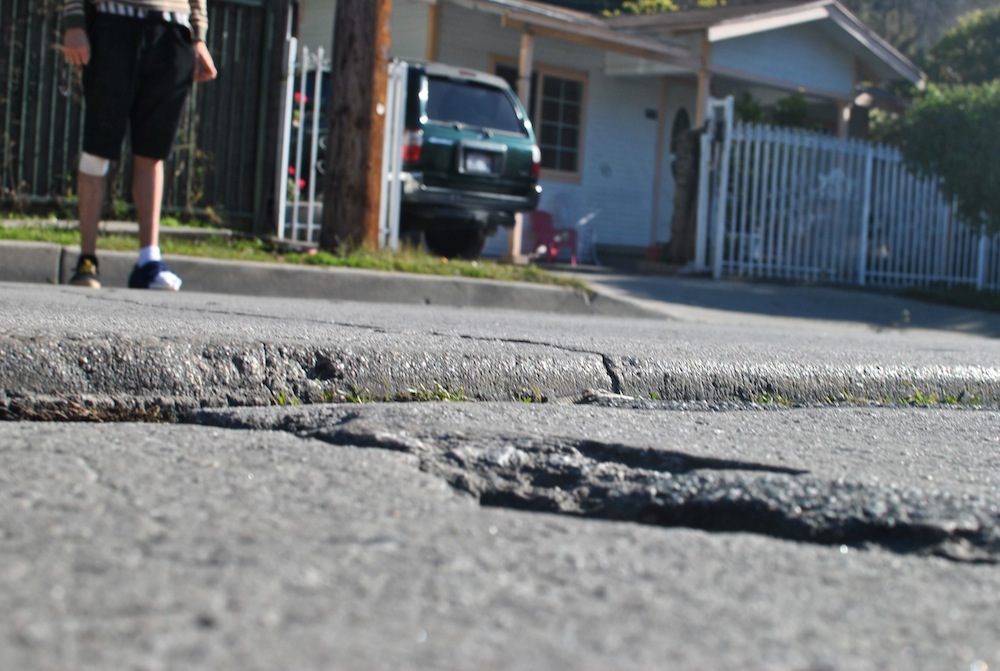 Riding a scooter or motorcycle in the city of Los Angeles, when everyone else is in rush-hour gridlock (and you’re passing by them in a blur), is an adrenaline-filled adventure. Until the inevitable happens: you fall. And if you’re like me, you own a scooter for the same reasons you lack health insurance: shortage of funds. So when you have an accident, you’ve got to be careful to avoid paying out more than you ever saved. Being broke can be expensive.

I bought my dearest—a jet-black, four-stroke 2006 Bajaj Chetak scooter—in 2008, during my first year at Pasadena City College. I also coughed up an extra hundred bucks and became certified in the California Motorcyclist Safety Program. With every ride, I fell more in love. I rode my scooter to school, to work, for leisure when I was bored, and for therapy when I was depressed. Until the morning of January 8, 2013, despite many close calls, I never had an accident.

That day, I was in Eagle Rock riding north on Figueroa, just a block away from Colorado, the only other street on my two-street commute to Pasadena. All of a sudden, the cracks in the pavement underneath me widened, with a two-inch difference in height between the two split sections. My front wheel started to wobble between the two layers and eventually hit a pothole. I fell, as did the 227-pound scooter, which crushed my left foot, while my knees and head (in a helmet) dragged and screeched along the cement.

It all happened so fast. I attempted to get up, but I couldn’t put any weight on my left foot, and blood was soaking the surrounding sock. A man who lived nearby rushed to help me out of the street and guide me to the sidewalk. I then realized that my left kneecap, dark grayish-white, was visible.

“Are you sure?” he said. “You’re bleeding a lot and I can see your bone. You need medical help fast.”

“Yes. I’m sure,” I said, already fearing medical bills. “I’ll just call my girlfriend to pick me up. We live close by. Thank you very much.”

Meanwhile, someone had called 911, and sirens were in the near distance. I managed to unlock my iPhone with bloody fingers and call my girlfriend to pick me up. I stopped receiving Medi-Cal when I turned 21, and these days I make barely enough freelancing money for rent, let alone health insurance. When a fireman arrived with a first aid kit and digital pad in hand, I asked not to receive any help from the ambulance on the way.

“Are you sure?” he asked. “You might have a concussion and not even know it.”

After checking my vitals and pleading with me to change my mind, he produced a waiver, which I signed with trembling hands.

“You can go to an urgent care and they’ll clean you right up,” he said sympathetically. “There’s one right next to the ER on Fair Oaks.”

My girlfriend arrived and drove me to the nearest urgent-care clinic, HealthCare Partners on Fair Oaks. Each dip and bump on the way there felt like a hammer blow to my foot. When we arrived, despite a full house of miserable-looking patients, the receptionist expedited my admittance. But the nurse who examined me was taken aback by the sight of my knees. I had three deep abrasions that were filled with coarse pebbles, jagged glass particles, and other debris from the dirty concrete. “It would probably be better if you went to the ER,” she told me. “You might need a specialist to clean it out.”

We were back to square one—and panicking. This time, we drove to the ER at Huntington Hospital and had our car valet parked. Cost: $7. Inside, the nurse expedited my admission—until my girlfriend said the words “no insurance.” I’m used to this: when you say you don’t have insurance, everyone’s demeanor changes fast. No more fast-track admission. In this case, though, it was an advantage, because there was no way I could afford what they were about to do to me. My girlfriend asked a nurse how much I could expect to be charged. “I have no idea,” the nurse replied. My girlfriend kept pressing. “Easily a couple of thousand just for seeing the doctor,” the nurse finally revealed. “I’m not supposed to tell you anything, but all we’re going to do is clean out the wounds, and that’s about it.”

“OK, thank you very much,” my girlfriend replied, grateful for the nurse’s candor.

With that, we were off again and dispatching the valet to get our car, with me waiting on one foot. For our third stop, we visited a branch of Medical Urgent Care Clinics. That it was on the second floor of a building with no elevator was not ideal, but it had good reviews on Yelp. I managed with my girlfriend’s help to hop up the stairs. To our happy surprise, the place was empty, and they treated me right away. The cost: a flat $75 cover fee. Dr. Saravia, a young, pretty doctor who received her training in Guatemala, expressed empathy upon seeing my bloodied leg, much of it dirt-black from the road rash, and then she began to clean me up, with the help of a younger nurse. Sensitive to my finances, she consulted me before every injection she felt she needed to make, telling me the price of each. It was like being in a restaurant and hearing the specials. Most were vaccinations, and I chose to get them all and pay the $25 per-shot fee.

Two-and-a-half hours later, my wounds were all cleaned up. I ended up requiring stitches on both knees because the cuts were too big to heal on their own. For three or four weeks, I’d be unable to bend my legs. The doctor told us that she suspected that my left foot had some breakage and sent me to get X-rays at a separate location, five minutes away.

At the X-ray shop, we learned that each X-ray would cost $75. My girlfriend repeated the two magical words, “no insurance,” and began to engage in a combination of pleading and haggling. They agreed to do an X-ray of my foot and one of my knees for $75 total. When the results came back, I was told that my fourth metatarsal had sustained a tiny splintering. “It’s small,” said my X-ray technician with a smile, “but it’s enough to put you out of combat.” As a motorcyclist with three bikes at home and some past falls of his own, he was sympathetic.

Then it was back to the Urgent Care Center, where I got a temporary fiberglass cast put on my left foot for $50 and a prescription for 8000 mg of ibuprofen for my painful swelling. I also had to buy a pair of extra-tall crutches, which were $50. The earliest appointment with an orthopedic doctor was for the following Thursday.

At the orthopedic clinic, I was told the initial consultation would cost $250 plus any extra treatment. As I checked in, my girlfriend made sure to mention that I had no insurance. At this point, we weren’t just saying it to save money; we were also noticing that it seemed to result in more down-to-earth and candid opinions from the doctors about treatment. My young and lively orthopedist suspected I might have gotten a “Lisfranc fracture,” a rare foot injury, but luckily an X-ray result revealed otherwise. I got off easy and would need only a flat-soled steel sandal for my foot to heal. Cost of the orthopedic expedition, including sandal: $260.

It’s been a little over a month since the accident, and I’ve finished my ibuprofen and antibiotics. My knee wounds are finally drying up and my purple foot is getting better every day. Unfortunately, my professors dropped me from three of my final four classes, since school policy is to drop a student on the first day if he doesn’t show up. This delays my hoped-for transfer date by a year. I also fell behind on my freelance food photography and food writing work. I now owe my girlfriend $550 for rent, and I spent $761.80 on my medical treatments. Still, it’s a lot less than I’d owe if I’d let an ambulance take me to a hospital.

A few years ago, when everyone was debating healthcare reform, people talked about changing the system to give patients more incentives to save money. Having insurance makes you spend more, it was said, and having skin in the game makes you save. I admit they have a point. If I’d had insurance I would have said yes to the ambulance. I would have gotten my treatment in the ER. I would’ve said yes to most of the recommendations made by my doctors. I would not have been panicking about money. I would not have driven around to a half dozen different places patching together treatment. The way I did things, I made sure that my doctors did only what they felt was absolutely necessary, and I saved a lot.

But it was a hell of a way to cut costs.