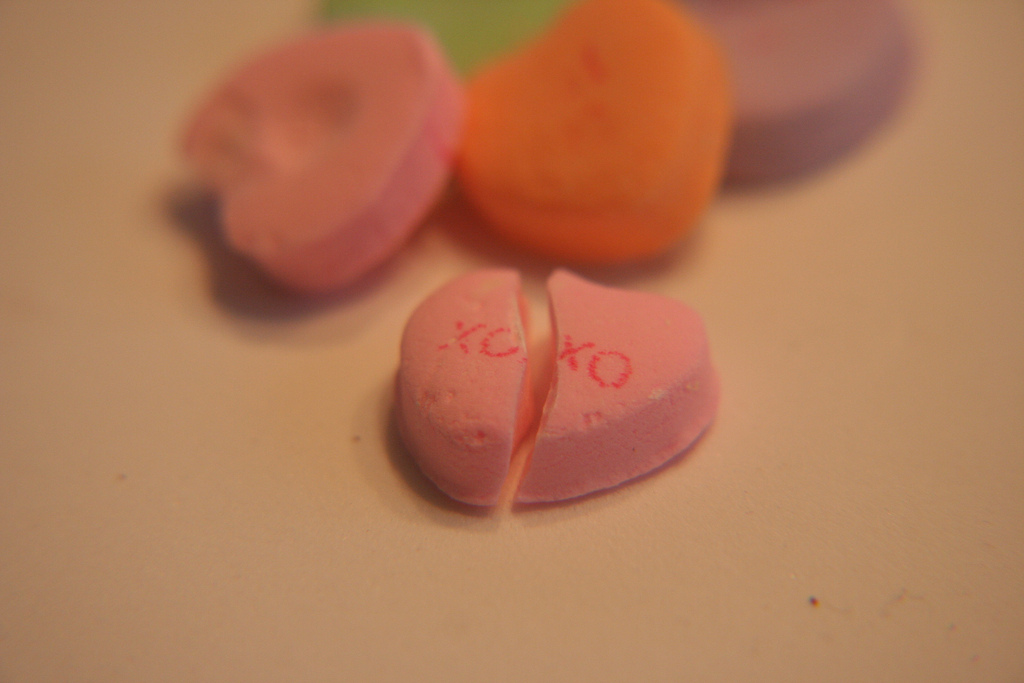 Ever since I was 8, or maybe even younger, I have woken up on Valentine’s Day and followed a trail of glittery heart cut-outs laid out for me by my parents. After eating breakfast at a special place at the table set with flowers and doilies, I would go to school with a basket of felt valentines I’d made the night before and filled with little candies. I prided myself on not resorting to those store-bought paper valentines with Lion King characters and tease-y greetings.

In grammar school, Valentine’s Day was really fun. We’d spend the morning making heart-shaped bags out of pink, red, or purple construction paper. Then we’d have an exchange, and everyone would walk about the room passing out valentines by placing one in each person’s bag. I’d keep looking excitedly at my heart bag as I crossed the room. It would be bursting with candy and cards after a few minutes. That was one of my favorite things about Valentine’s Day: I felt surrounded by friends and liked by everyone.

In elementary school, I was protected by the rule that if you give out valentines, they have to be for everyone. But last year, I started middle school, and that rule didn’t apply anymore. Instead, the school set up a little boutique where you could buy fake roses or candy packages and send a message, and kids would buy them and put them on one another’s lockers.

I’d read in some books that middle school isn’t all roses and candy, but I didn’t believe them. So I was in for a shock. It was Valentine’s Day, but I didn’t get any valentines. At first, I was confused. Why did no one give out valentines this year? Then I noticed that other sixth graders were receiving little candy packages. People were giving out valentines; they just weren’t giving them to me.

This year, in seventh grade, I’m prepared. I am not expecting to receive many valentines, if any. I’m ready to see gleeful girlfriends hugging their boyfriends and numerous lockers with candy-grams on them. Sure, it would be really nice to get valentines, but I’m not so hung up on getting them that I’d be heartbroken if I didn’t get one. My dad says boys are jerks at this age anyway, and many are too shy to send girls valentines. I have no idea what goes on in their heads, but I agree they’re not the friendliest people in the world.

Sometimes I think it would be great if middle school had the valentine rule too, so that people who don’t get anything wouldn’t have to spend Valentine’s Day wishing it were over. But there are about 250 kids in my grade, so that would be a hard rule to follow. Also, when you get older, you start realizing how you really feel about other people, and if you don’t like them it feels strange to give them a valentine.

So this Thursday, I’m just going to keep a low profile and not be discouraged if I don’t get anything. I’ve realized that I’m not the only one without a valentine. In fact, I’ve noticed we are a majority, so what I’m experiencing is something most of us go through. Those books make better sense now. Meanwhile, some of us girls will send each other fake roses. And who knows? Maybe this year I’ll be lucky and have a bunch of secret, or not-so-secret, admirers.