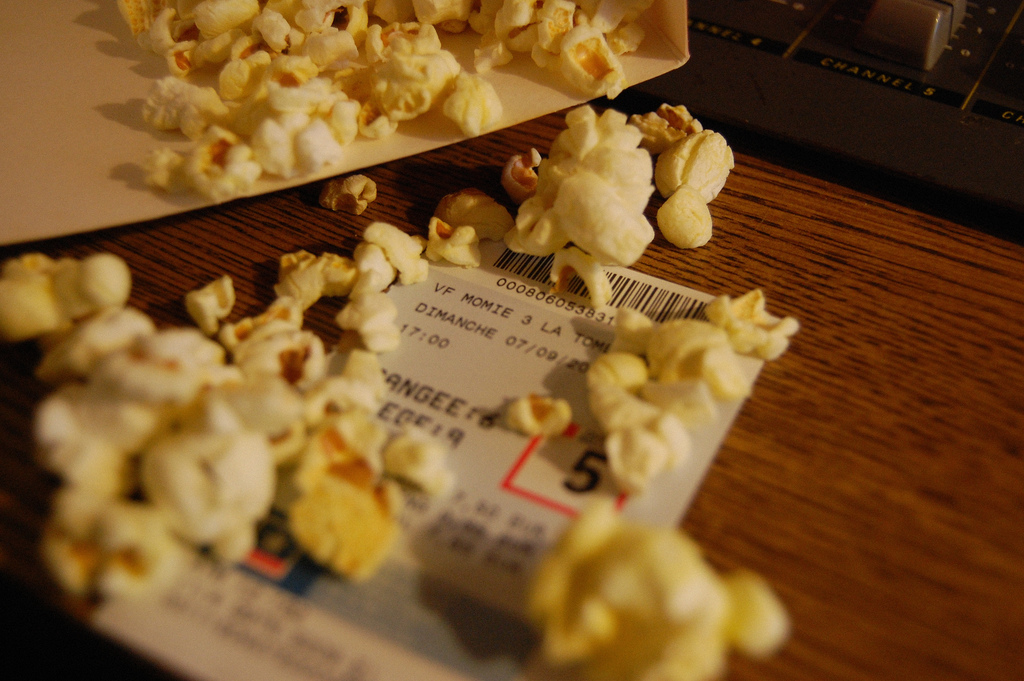 On Christmas Day 1989, I was living with my mother and father at Mather Air Force Base in Sacramento, where my father was stationed. I was only three, but I still remember the particulars. The gifts were ordinary at first: socks from Mom, hat from Dad, money from grandparents. But then my mother, a movie buff, gave me a TV, a VCR, and five movies on VHS.

It was a strange mix for a three-year-old: Ghostbusters, The NeverEnding Story, Care Bears Movie II, Lethal Weapon, and RoboCop. Most of those movies were obviously not suitable for my young eyes. But soon, I was watching them anyway. The shooting and mayhem of films like Lethal Weapon and RoboCop are supposed to have a bad influence on kids, somehow implanting the seeds of violent behavior. People often say that about Hollywood movies. But I’ve always felt like they were a lifeline and a rescue.

Without cinema, I don’t know where I would be.

I was born in April 1986 on a U.S. Air Force Base outside of London, England. I was the only child of my mother, Etta, and the fifth of nine children of Frank, my father. Theirs was not an easy relationship. My father was an extremely secretive man and a bit of a womanizer. My mother coped by reading books and watching all types of movies at the base cinema.

When we moved back to the U.S. in 1987, my father went into the military police, and we moved around from base to base in California. He was a man I loved and feared at the same time. I’d hear him and my Mom argue, but I didn’t understand. So I’d put myself in front of a TV or a book to make the feelings go away.

My father used movies on me. Taking me to the cinema or buying me a movie on VHS was his idea of being a dad. I would go three nights a week, sometimes with my dad, sometimes with my mom, sometimes with both. Sometimes my father would take me to a movie and then buy me a movie at the base exchange afterwards. He didn’t really want to be an active parent. I don’t remember him doing much else with me. But he made sure I knew movies—the series they were part of, the actors and actresses that were in them. All of that.

My grandmother, “Gammy,” lived with us. She had a stroke when I was a baby, so she wasn’t quite there mentally, but she was very protective of me. And the one thing I did with her, as with my parents, was watch movies. On Saturday and Sunday afternoons, if I didn’t have to run errands with my mom or play outside with my friends, I would sit in her room all day watching movies on her big TV.

When you’re raised on movies like that, you can’t help but get the film bug. I recited lines from movies like my classmates recited their ABCs. My mom caught on and began putting me in plays and young writers’ workshops so I could write my own stories.

When I was a teenager living in Sacramento, my friend Brian, another young film buff, would invite me over to his house, and we would analyze all types of films. Soon we decided to try making them ourselves. We put some money down and bought a Sony Hi8 camera online. Brian’s older brother was a computer whiz and showed us how to edit and burn our movies onto discs after shooting. The first film we did was Knife, a 10-minute short about me being stalked by an unseen force. We also made Hamfeld, a hip-hop version of Hamlet that was structured like Seinfeld.

When we were juniors in high school, Brian and I made our first attempt at a feature-length film. We got a bunch of friends together, locked down some locations, and produced Group, a (very) low-budget urban take on One Flew Over the Cuckoo’s Nest. I wrote and starred in it. Brian directed and edited. Although it was a great experience for all who were a part of it, it never found an audience. Soon, Brian and I went our separate ways. He found religion. I stayed confused, trying to discover who I was. This involved getting into trouble—running from the cops, getting with girls, and staying out all night.

I was 17 when my parents finally divorced. After that I lived off and on with each of them, until my father stopped showing up at home and there was no food for me to eat in the house. Then, one day when he was actually home, he told me I had to move back with my mom. Life seemed far less fun than it had just a few years prior.

I became angry. So angry I didn’t know what to do with my life. It made me feel inferior to the world around me. I was depressed and felt out of place among my peers at school and all around my neighborhood—everywhere, really. I found that the only things that calmed me were films—watching them and making them.

Between 2004 and 2007, when I was at American River College in Sacramento, I met four friends—Marcus, Matt, Craig, and Trey—who became collaborators. We’ve made films and entered them into local film festivals, including the Gaffers Global Art Film Festival in 2006. I won the “New Emerging Filmmaker” award for my short crime thriller Thug Invasion. In 2008, I won a role in a basketball drama filmed in the Sacramento area. I played one of the main characters. It premiered at the Crest Theater and had a special screening at the IMAX theater.

But life has also intruded. In 2008 when I was 22, I become a father to a baby girl. I am no longer with her mother, because we just don’t get along. But we come together when we need to for our child, who also likes movies, just like her father.

In 2011, I met a no-nonsense girl named Nichole who helped me grow up. Last year, we were married on the beach in South Lake Tahoe, and, in December, we welcomed a son. The economy has been rough, and I have lost some decently paid jobs because of it. Today, I work an unfulfilling job as the lead of the footwear department of a sporting goods store, living paycheck to paycheck, supporting my wife and both children. I still watch as many movies and put as many words to paper as possible, in the hope that my screenplays and short stories will be clever enough for someone to take a chance on me and my collaborators.

Can movies be bad for us? Maybe for some.  But not for me. They are my escape, my refuge from negative thoughts, and a source of energy for my creative work. They are a reminder of the journey I’ve traveled—and keep traveling.