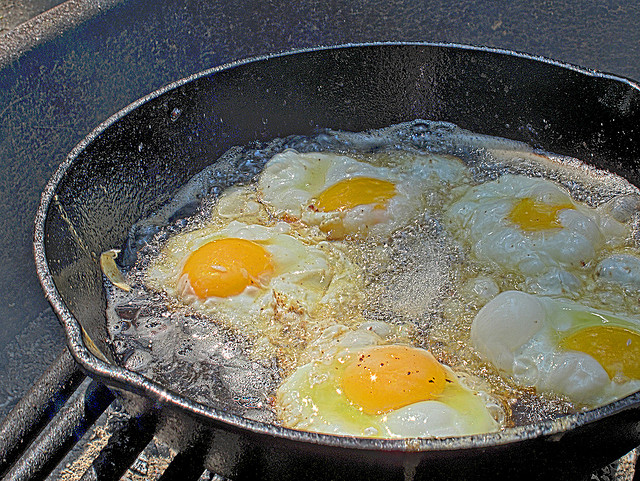 The take-a-bath-once-in-a-while campaign, among others

Ever since we’ve had our brains compared to sizzling eggs on pans, we at Zócalo have enjoyed health propaganda. Sometimes, it even works. But when? It turns out that public health campaigns have been a staple of human history, and we have lots of examples to draw upon. Therefore, in advance of the Zócalo event “Does Health Propaganda Work?” we asked a variety of people who know something about public health the following question: what is your favorite example of health propaganda in world history?

Ninety percent of smokers regret having ever started. About 40 percent make a serious attempt to stop every year, with most failing. Smoking kills over 5 million people globally every year. Smokers on average die about 10 years shy of normal life expectancy. I’ve never met a smoker who hopes his or her own children will become smokers.

One of tobacco control’s most important tasks is to provoke smokers into making attempts at quitting, because attempts are the best predictor of eventual success.

This brilliant Thai ad taps into the suppressed revulsion that most smokers feel for their own smoking. It uses smoking children as stealth messengers for the unforgettable, stop-you-in-your-tracks message they deliver to the adult smokers on their calling cards. It is a message that would work in all cultures that treasure children and know that out of the mouths of babes can come the most penetrating of insights.

Simon Chapman is a professor in the Sydney School of Public Health at University of Sydney.

Too often we assume that people will change if we just educate them about why they should. But research repeatedly tells us the opposite.

Designers of health propaganda should identify which of those factors are at play and focus messages accordingly.

Take social norms. They create peer pressure for us to behave in a similar way. The problem is that we are often wrong about what our peers are doing. We overestimate their risky behaviors and underestimate healthy behaviors. Propaganda correcting these perceptions—also called social norms marketing—can be effective in getting us to change.

That’s why my favorite campaign is a little-known one from the early 1990s, when Northern Illinois University researchers found that many students overestimated how much alcohol their peers were drinking. As a result, moderate drinkers consumed more than they would have otherwise, and heavy drinkers found justification for their binging. Northern Illinois University launched a campaign that took on those misperceptions directly, with messages about the actual number of drinks most students had each time they went out. Ten years after the campaign started, binge drinking among students had gone down 44 percent.

Julia Coffman is founder and director of the Center for Evaluation Innovation, and specializes in the evaluation of communications and advocacy efforts.

The take-a-bath-once-in-a-while campaign, among others

Attempts to change behavior to promote health are certainly not new, and my favorite campaigns draw upon the past. Ancient religious observances on the eating of pork, for example, brought together an interest in the shaping of moral rules with concerns for health. King James (of Bible fame) published a powerful anti-smoking tract, Counterblaste to Tobacco, in 1604, arguing against smoking on health grounds using the power of his position. (Admittedly it fell on deaf ears.)  Late 19th-century municipal government campaigns against spitting—seen today as shameful—spoke to its danger, illegality, and risks for tuberculosis. Perhaps the most successful health campaign of all was the effort to improve public hygiene. Medieval Christianity thought bathing self-indulgent (explaining the origins of the perfumes industry!), but this was later contradicted by John Wesley’s dictum of cleanliness being “next to godliness.” In the late 19th century it was a combination of new science (the discovery of germs), new availability of cheap soap, health education, and commercial marketing which massively changed social norms.

Sadly, commerce today is equally adept in promoting the unhealthy and the addictive, the sugary sodas, the salty chips, and the “homestyle” factory-processed foods. Companies like Coca-Cola and Pepsi spend more on marketing than the entire budget of the World Health Organization. Health campaigns like Five a Day (fruit and vegetables), originating in California, are good ideas, but it is the commercial marketers who have the cash, marketing savvy, and lobbying firepower.

Public health campaigners have been enormously successful—in the past. Today we need better story lines and supportive media to reconnect with the public. As with tobacco, we need to expose industry’s efforts to subvert public health. But health propaganda alone won’t do it: public health will always be outgunned. We need to think bigger and deeper.

Geof Rayner is the author, with Tim Lang, of Ecological Public Health: Reshaping the Conditions of Good Health (Routledge 2012). He is a former chairman of the UK Public Health Association.

To have an impact, though, this information needs to reach both clinicians and patients. That’s why one of my favorite recent forms of health “propaganda” is an initiative called “Aligning Forces for Quality,” or AF4Q, funded by the Robert Wood Johnson Foundation. AF4Q programs in 16 parts of the country are collecting, analyzing, and publishing information about how well individual clinicians are caring for their patients with conditions like diabetes. For example, the Cincinnati AF4Q program puts this information on a website so patients can evaluate their current or prospective physicians—who can also see how they compare to their peers in the community. As data has become more available, this program has expanded to include more physicians, diseases beyond diabetes, and information about quality of care at local hospitals.

Conversely, negative propaganda campaigns are detrimental to public health. These include TV shows that masquerade as sources of good medical information or blatantly sell dubious health products. Internet and e-mail spam campaigns for fraudulent medical treatments are even worse for the public’s health. Criminals selling fake medicines, mostly in developing countries, are even more abhorrent. The worst of these, in my opinion, are those selling fake malaria medicines that contain aspirin but no anti-malarial drugs. This is a successful (but tragic) marketing ploy because aspirin lowers malaria’s fever without treating it, leading patients to come back for more fake medicine since they think it is working. The criminal gets repeat business from untreated customers who contribute to the spread of the disease, generating more “customers” for the criminals. Put that one in my “least-favorite” category.

Michael D. Miller, MD is a consultant helping healthcare and life science organizations with their policy, communications, and public affairs challenges. He is based in Washington DC, and has more than 25 years of experience in Government and corporate positions. Find him and his blog at www.HealthPolCom.com.

Some 13 years later, it’s a true classic. I marvel at the genius behind the “truth®” tobacco counter-marketing campaign put on by the American Legacy Foundation. I studied the effectiveness of the truth campaign in the early 2000s and found it to be effective in preventing youth smoking initiation and innovative in a number of ways.

First, it branded the state of being tobacco-free by appealing to teenagers’ need for uniqueness, a powerful psychological construct. Branding behavior was a new idea then, truly innovative, and has since grown rapidly as a way of improving public health. The truth campaign understood what teens wanted and offered it to them—and then delivered, the sign of a great brand. Second, truth was of, by, and for teens. It came from their own aspirations—not from adults. Third, it was successful. Several studies, including one published in the American Journal of Public Health in 2005 found that truth contributed to substantial declines in youth smoking during the peak campaign years in the early 2000s. It remains a model for social marketing campaigns everywhere. If there’s been a better social marketing campaign, I have yet to hear of it.

As a historian of medicine, it has been a privilege to study a variety of health propaganda campaigns—through posters, photographs, written records, films, and recordings of interviews with campaign participants, all of which have been carefully stored in archives and libraries across the world. Many of the public health campaigns of the latter half of the 20th century provide important lessons for public health work today. The global smallpox eradication program, which contributed to the eradication of a damaging human disease for the first time ever in history, is particularly fascinating and instructive. In order to increase general vaccination levels around the world and the reporting of the disease, public health officials carefully assessed local cultures, politics, and economics. They worked to produce publicity materials that helped engage masses of people, mobilize wide-ranging social and political support, and inform people about the great dangers of smallpox. Their success led to the isolation of those infected by smallpox and the immunization of the people they had been in contact with. In 1980, an independent committee put together by the World Health Organization certified that smallpox had been eradicated worldwide.

If you are to believe a lot of what is being said about the history of smallpox eradication, you would be forgiven for believing that all that is required for the success of disease control and elimination programs is technology. But while it’s undeniable that technological innovations—in this case, safe and efficacious vaccines—are important, the mobilization of popular support through the provision of honest and easily understandable information is perhaps even more crucial. And the sooner those who often present themselves as the custodians of science understand this the better. When they do, they will once again start preparing effective public health publicity campaigns on the basis of what the population being vaccinated fears, thinks about, and hopes for, rather than their own preconceived ideas.

Sanjoy Bhattacharya is a professor of the history of medicine and director of the Centre for Global Health Histories at the University of York. Visit the smallpox eradication histories project here.

My favorite is tobacco control, for one critical reason: It has shown that successful efforts can’t rely on education and messaging alone. They must be coupled with policies that improve our surroundings.

People’s health decisions and behaviors happen in a context, and so it is not enough to tell people not to smoke or to give them information about health risks. That’s what public health advocates did in the early days of tobacco control, and the results were meager. They simply couldn’t compete with a culture of smoking that the tobacco industry had spent billions to create.

So advocates changed their strategy. Instead of identifying smoking as the problem, they zeroed in on the tobacco industry. Advocates then succeeded in passing anti-tobacco policies and excise taxes on cigarettes—changes that Big Tobacco fought. Today, the industry is no longer able to plaster schools and parks with billboards, fill vending machines with their product, or pay doctors to downplay tobacco’s health harms. In cities and states throughout the U.S., smoking is not allowed in public spaces. College campuses and even some apartment complexes have passed bans. In other words, instead of having environments that encourage smoking, we have environments that discourage it. Millions of lives have been spared as a result.

What’s more, public health advocates have learned from the experience of early tobacco control and applied those lessons to other health efforts.

Heather Gehlert is the online communications specialist for Berkeley Media Studies Group, a nonprofit organization that analyzes how public health issues are portrayed in the media.