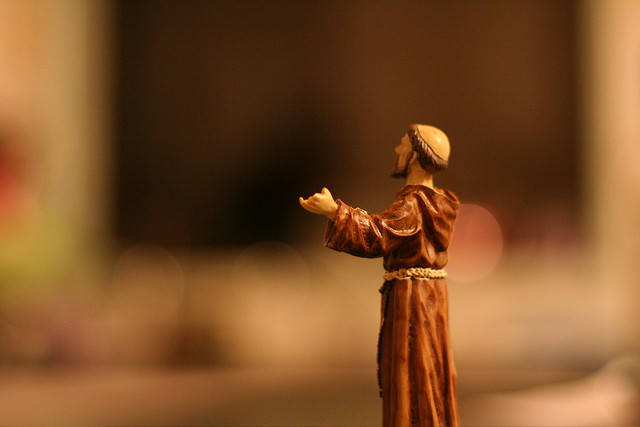 If one argues that priestly celibacy is unnatural, Vatican officials should not complain, since they claim, or even boast, that it is a supernatural sign for others. The priest points to something beyond nature. Saint John Chrysostom (c. 347-407) even said that priests live on earth the life of angels, as that was described by Jesus: “In the resurrection they neither marry nor are given in marriage, but are as the angels of God in heaven.”[i] Thus priests’ lives are a kind of foretaste of heaven, transcending earthlier drives. That is the state of mind expressed by the pope’s spokesman when, responding to reports of sex rings in the Vatican, he said that journalists are just too worldly to understand an ethereal church: “Whoever has money, sex, and power at the forefront of their mind sees the world through these parameters, and cannot see beyond, even when looking at the Church. Their view cannot look to the heights or go in-depth to understand the spiritual dimensions and motivations of existence.”[ii] The priests are just too angelic for our clay-cased minds to rise to their level.

But for people who have transcended sex in such ethereal ways, church authorities seem to be the ones with sex “at the forefront of their minds.” They seem obsessed with masturbation, artificial insemination, contraception, homosexuality, abortion, divorce, and a pornographic culture. I caught an earlier glimpse of this obsession when I read, recently, the reports made to Rome by Archbishop Eugenio Pacelli (later Pope Pius XII) when he was papal nuncio to Weimar Germany in the 1920s. The seeds of a later fascism were forming about him, but what he reported as a danger, over and over, were sports events where women gymnasts wore uniforms that “accentuate their shapes.”[iii]

For years Catholic parishes policed Hollywood, posting lists by the Legion of Decency of movies Catholic should not see because they were immoral—showing, for instance, fornication or adultery without its being punished. At the high school I attended, priests sent us boys out to ask drugstores to remove Esquire magazine from open racks. Playboy and its ilk did not exist yet, but the drawings of “pin-ups” by George Petty upset my priests much as girl gymnasts distressed Archbishop Pacelli. Did the priests really think our mission to the drugstores would make us not want to look at Petty Girls? Catholic clerics generally (not all of them, of course) have a bad case of sex on the brain.

Church authorities claim that their teaching is not prompted by hatred and fear of the body. But that is exactly where it came from. And, paradoxically, it came when expressing that fear was a popular move. Christian apostles, bishops, and (later) priests were married in the early church. Paul’s Letter to Timothy (3.2) says a bishop must be “the husband of one wife.” Formal marriage was recognized in the church’s ministers well into the fifth century. But by then there was a cultural spasm that swept through Christian, pagan, and Jewish circles, charted brilliantly in Peter Brown’s The Body and Society. Neoplatonist and Stoic ideals of self-control veered off the rails into a rage of competitive asceticisms. It was widely held that the soul was imprisoned in a clogging body, and it must wrestle itself as free of it as could be done without actual self-destruction.

“Desert fathers” drew rapt attention as they starved, scourged, and mortified themselves, living in caves, bare cells, or on pillars. Simeon, called “Stylites” (Pillar-Hermit), became such a celebrity that emperors and councils sought his approval. They were now the holy ones, offering a foretaste of heaven. People wanted their counsel and blessing. Bishops like Athanasius, realizing that married clerics had lost respect when compared with these “heroes of God,” glorified the desert fathers in his Life of Antony. He urged his fellows to adopt some ascetical practices of the desert trend-setters—fasting, flagellating, and giving up marriage. This admiration for spectacular self-denial lingered on into the bulimic and mortifying fervors of the Middle Ages, with emaciated saints staring out at us from church paintings and statues. Holiness was equated with self-torture.

For priests to adopt some of these ascetical practices was, initially, an example of the church yielding to a popular movement—something that has happened more often than is recognized. Even the medieval papacy-as-monarchy (with earthly realms) only came about because that was the recognized form of authority at the time. But church rulers try to hang onto these changes when they go out of fashion. When the earthly monarchy was pried out of Pius IX’s resisting hands in the 1860s, he called this an affront to the changeless church’s privilege. In the same way, when the Renaissance rediscovered the beauty and nobility of the body, the church tried to keep its medieval denunciations of the body, just softening them and looking for new justifications of them. As some faded trappings of the papal monarchy have straggled into our democratic age, the ascetical urge (in diminished and symbolic form) has twitched on, in defiance of modern psychology and physiology. It is still suggested that priests are holier than others because (in theory) they never have sex.

This official view of sex is more and more ignored by Catholics. When the bishops said in the last election that President Obama was violating Catholic conscience by providing insurance money for contraceptives, more Catholics voted for Obama than against him. The “Catholic conscience” against contraception, the very thing they invoked, is no longer there.

The consequences of this split between the body of believers—the church as Vatican II defined it (the People of God)—and their formal rulers is very damaging to the rulers. Since they keep insisting on dogmas no longer believed or believable, the only recruits to the priesthood must be men willing to accept (or pretend to) the dictates of the rulers. This means that candidates of limited minds or limited honesty are the ones joining the rearguard action of a totalist system.

This has a distortive effect on a group so recruited and so disciplined. Are its members to continue the obsessions of their superiors? Are they to absorb atavistic attitudes toward the Enlightenment (making the Vatican say, now, that it is giving up on the West and turning to cultures that had no Enlightenment)? Are they to feign what they do not believe, or believe what sets them apart from their Christian fellows?

The effort to live an angelic life ahead of time, in defiance of the body, reminds me of two important sayings from the past. Aristotle wrote: “Man not living in society with others is either a beast or a deity” (punchily alliterative in Greek—either therion or theos).[v] And Gregory the Great wrote in his reflections on Job: Corruptio optimi pessima.[vi] “The best, impaired, becomes the worst.“ That describes the deepest problem of priestly celibacy.