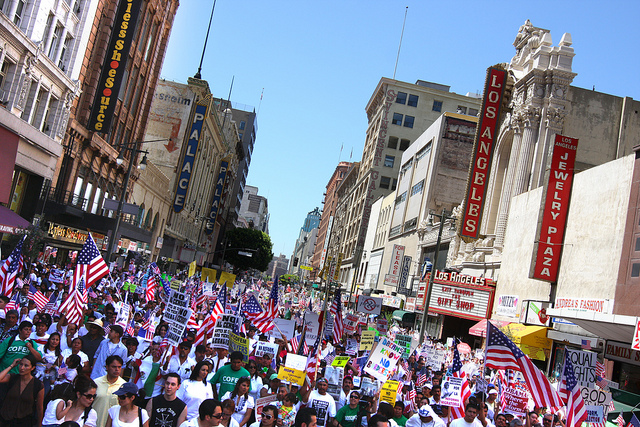 For Angelenos of Mexican descent, in many ways yes

L.A. without lots of immigration would be a sorry place

It all depends on the stories we tell ourselves

Most of us think of Los Angeles as Exhibit A of mass migration, especially of immigration from other nations. In reality, though, immigration has slowed greatly over the past decade, and Los Angeles, like much of California, is becoming increasingly native-born. High costs of living and other economic factors make other destinations more attractive to newcomers, while Angelenos are becoming more rooted. With these demographic shifts in mind, in advance of a Zócalo event “How Will L.A. Face Its Post-Immigrant Future?“, we approached several Californians who think about this sort of thing and asked them the following question: If immigrants stop coming to Los Angeles and the population becomes increasingly native-born, will Southern California be a better place to live?

For Angelenos of Mexican descent, in many ways yes

If immigrants were to stop coming to L.A., the impact would be greatest on its largest ethnic population: Mexicans. It would take a generation or two, but the costs and benefits associated with ethnic distinctiveness would be very different from the ones that ethnic Mexicans know today.

History suggests as much. The turn of the last century saw huge numbers of southern and eastern European immigrants settle in major American cities. For a variety of reasons, including restrictive immigration laws, that immigrant settlement stopped. Ethnicity remained a feature of life for the “white-ethnic,” U.S.-born generations that came later. But it wasn’t the same without immigrants. Ethnicity became an optional and symbolic part of life; something that people enjoyed as a leisure pastime, without it defining their social identity and life chances.

Today, white ethnics lament being attached to an ethnic ancestry whose vibrancy is too diminished, especially amidst all the “diversity” in contemporary America. Ethnic Mexicans might too come to lament a muted ethnic salience. There would be no Mexican immigrants around to replenish a strong sense of ethnicity that exists today. The food, music, language, and institutions that embody Mexican-ness might become sporadically enjoyed elements of the same sort of symbolic ethnicity that white ethnics exhibit.

White ethnics might also say that they would hate a return of the virulent nativism that their immigrant ancestors endured. Likewise, people of Mexican descent would not likely miss the negative attention that comes from being part of a group characterized by large numbers of poor, unauthorized immigrants. The anti-Mexican nativism that is so much a part of public discourse today might, then, become part of a nostalgic narrative that future generations tell when recounting how things were for Mexicans way back when there were lots of immigrants in L.A.

Tomás Jiménez is assistant professor in the department of Sociology at Stanford University.

Immigrants are a self-select group of people who leave behind the familiar to cross borders in search of better prospects for themselves and their children. They are optimistic—and even more so about the opportunities for their children. This “immigrant optimism” works as a resource for the second generation, who outperform their third-generation coethnic peers. L.A. thrives on immigrant optimism.

If immigration were to cease to replenish L.A.’s ethnic communities, immigrant optimism would disappear, as would the melodious babel of foreign languages. Even with continued immigration, bilingualism fades across generations, and, by the third generation, English monolingualism predominates. Among third-generation Asians, 92 percent speak English only, and among third-generation Latinos, the figure is 72 percent. Even with continued immigration, the late Samuel P. Huntington would have no reason to fear that L.A. will be divided into two cultures, two languages, and two peoples.

But would a declining stream of newcomers result in a more cohesive L.A.? Nativity and homophily do not guarantee cohesion or consensus. Consider, for example, how Angelenos have yet to reach a consensus on which basketball team to support—the Lakers or the Clippers. Moreover, socioeconomic divides are far more salient than nativity, increasingly so as inequality continues to grow in cities like ours.

Without immigration, Angelenos would not become more cohesive, but they would become less optimistic, less bilingual, less cosmopolitan, and less innovative. Imagine L.A. without Roy Choi’s Kogi Truck or Sang Yoon’s Father’s Office. I’d rather not.

Jennifer Lee is Professor of Sociology at the University of California, Irvine and a Fellow at the Center for Social Cohesion. She is author of Civility in the City: Blacks, Jews, and Koreans in Urban America and co-author of The Diversity Paradox: Immigration and the Color Line in 21st Century America.

L.A. without lots of immigration would be a sorry place

If the flow of immigrants to Los Angeles stops, it will be a disastrous and irredeemable loss.

Cities that saw large numbers of immigrants over the last generation also saw lower rates of crime, higher wages, and the revitalization of abandoned inner city cores. While causality may be difficult to establish, in general, when immigrants stop coming to cities with deep immigration histories—such as New York, Chicago, or Los Angeles—it can only mean bad news. Immigrants tend to follow the money: where capital flows, immigrants follow. To live in a city that attracts both capital and immigrants is to experience a culturally rich and diverse environment, and such cities naturally embody vibrancy, optimism, and grit, basic traits that have long characterized America’s signature can-do spirit.

The day that immigrants stop coming is the day we no longer attract those whose life is all about making a better tomorrow.  With apprehensions at the California-Mexico border in steady decline, Mexico’s economy poised to surpass the growth rate of Latin America’s most dynamic economy (Brazil), and Mexican birth rates at record lows, the idea that Southern California can always count on an unlimited stream of Mexican labor is downright delusional. It is entirely possible that in the not-too-distant future immigrants will stop coming to Southern California. If so, those who see immigrants as trespassers and interlopers may have occasion recall with regret the old admonition about being careful what you wish for, since it might come true.

It all depends on the stories we tell ourselves

Because of Los Angeles’ unique inception, the question of who belongs has always been contested. The flow of newcomers in search of a fresh start—a staple of the region since the late eighteenth century—has already made the city a site of striking cultural collisions. Becoming “a better place” may have less to do with where people are from and more to do with how we think about Los Angeles as an ethos. How well can we retell our own stories and find civic inspiration and moral imagination in them? We can see many of the layers of historical and geographic fusion here in our foods, languages, musical preferences, fashions, architecture, literature, and of course, in film.

But taking for granted these layers and drawing on them to create stories that bind us together isn’t enough in itself to make Los Angeles a better place to live.  Unless critically examined, our stories and lifestyles may just help perpetuate some of the persistent problems of inequality and social injustice that have also characterized the region historically.

On the other hand, if, even as we’re becoming predominantly native-born, we cultivate an awareness and memory of all the things that connect us to other places, times, ethnicities, and customs, then we’ll be living a place that’s getting better. We’ll be exploring and finding truthful inspiration in the many fusions of culture and history that we Angelenos are made of.

Rosa Garza-Mourino is the Director of External Partnerships and Professor at the undergraduate Liberal Studies program of Antioch University Los Angeles.