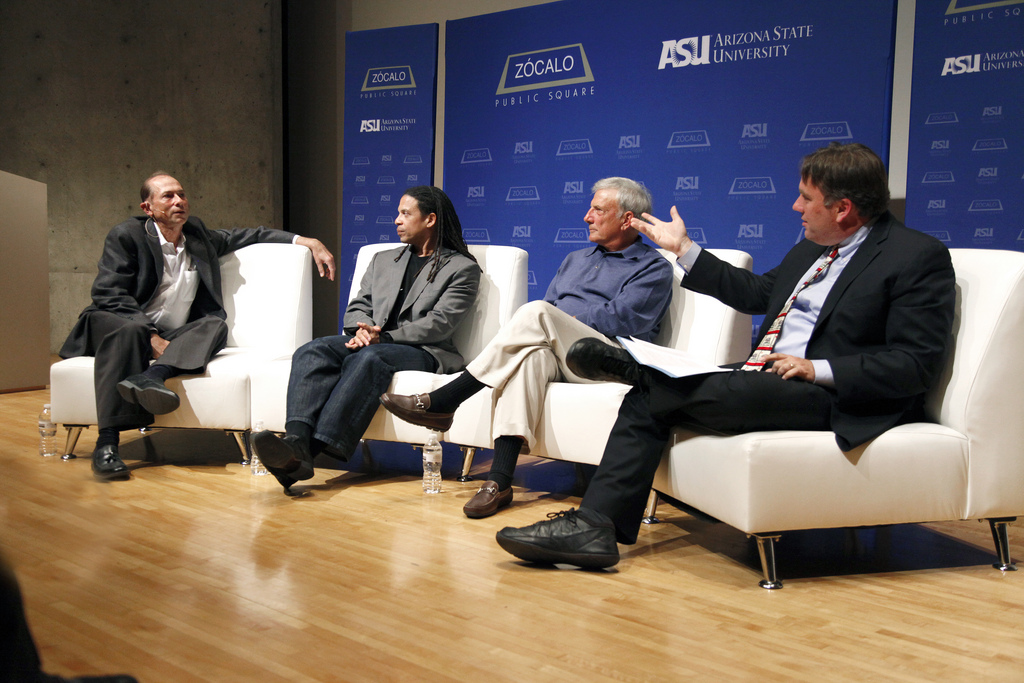 Joe Mathews, Zócalo California editor and author of The People’s Machine: Arnold Schwarzenegger And the Rise of Blockbuster Democracy, learned about the perils entertainment culture can hold for political journalists the hard way: When Schwarzenegger filed his papers to run for governor in the 2003 recall election, Mathews, who was covering politics for the Los Angeles Times, was knocked to the ground by an eager camera crew from Access Hollywood. They got the interview with the future Governator; he wasn’t able to get a question in edgewise.

At a panel co-presented by Arizona State University’s Walter Cronkite School of Journalism at MOCA Grand Avenue, Mathews asked a panel of journalists from print, TV, and the Internet: Are political and government reporters destined to be pushed aside by entertainment culture? Or can they embrace it?

TMZ co-executive producer Charles Latibeaudiere said that the collision between entertainment and politics doesn’t mean the death of serious journalism. At TMZ, they’re trying to make politicians into personalities—which can be one way of drawing viewers and readers into learning more about a politician’s policies. TMZ published a photograph of Illinois Congressman Aaron Schock’s six-pack, and “suddenly he had constituents reaching out to him—they didn’t even know he was their representative.” Sure, it’s funny, maybe even sad, said Latibeaudiere. “But if that’s what it takes to get them into church, as they say, that’s what it takes.”

But is this collision, asked Mathews, also causing problems? You’re as likely to see a candidate on The Daily Show as you are sitting down with a reporter; popular websites are driven by pop culture as much as news.

Jon Stewart and Stephen Colbert, and the anchors on Fox News and MSNBC “didn’t invent that kind of television or that kind of information,” said former CNN anchor and ASU journalism professor Aaron Brown. “I don’t find it particularly threatening to journalism at all.” The business has changed—but not journalism, argued Brown. However, journalists do need to stop pandering to their audience, he said.

It’s true that CNN is under pressure today to be entertaining; what you see on the other cable news networks “is more entertaining” than what you see on CNN’s straightforward news program. The challenge—which Brown isn’t sure is possible to surmount—is to be engaging on the days when big news isn’t being made.

But New York Times Hollywood correspondent Michael Cieply disagreed; star power is driving journalism more than ever, and it’s pushing the real news down and out, he argued, even at his own paper. He tipped his hat to TMZ’s journalism—calling it “one of the most intensely, classically reportorial organizations I’ve ever seen occur in this town”—but bemoaned the lack of importance in the material that’s taking control of journalism.

Web traffic especially is being driven by mentions of celebrity names rather than new stories; Cieply compared the vacant entertainment content posted online (even at his own paper) to “kudzu choking everything” on the sides of the road. A story that takes a reporter a week to report and write—even a story that breaks fresh news—is pushed down and out by soft celebrity interviews.

This isn’t new, said Brown. He recalled his worst day on television, over a decade ago, when he spent four hours reporting on the actor Robert Blake’s arrest for his wife’s murder—even though Blake at the time had no career to speak of and was known for just one TV role. Yet that program did huge numbers—and got a huge audience response.

The American public, said Mathews, is misinformed on any number of things. Can their obsession with celebrity be used to correct misperceptions and incorrect information—or is the truth being crowded out?

“I think this huge multiplicity of outlets, as much as it’s chewing us up economically—God bless,” said Cieply. However, he’s scared by our contemporary assumption that the Internet makes all news of any importance available at all times. There’s a “huge vacuum” of incidents and information that’s not reported, and that no one’s even thinking about covering.

Mathews asked the panelists if the blurring of the lines between politicians and entertainers and reporters is part of the problem—and if it’s creating new ethical questions, too.

“I don’t know what caused it, and why there’s this fascination with celebrity, but you can’t deny it’s a reality,” said Latibeaudiere—it’s the way the world works now. It’s the changing technology rather than the changing culture that causes ethical issues. On the Internet, your deadline is always two minutes ago; in the past, you waited for the newscast to go on air or the printing press to run. People are sacrificing accuracy for speed—and if you don’t double, triple, quadruple, quintuple check a story, “you’re going to get screwed,” he said.

Cieply said that there is one line that has blurred that he finds troubling: People getting political and historical information from films and documentaries, often in real time (as with The Social Network or Zero Dark Thirty). Documentaries in particular create “the illusion that everything you’re seeing must be true” when they’re in fact manipulating the events they present onscreen every minute.

In the question-and-answer session, an audience member asked whether entertainment coverage crowding out real information is causing problems for our democracy.

Latibeaudiere doesn’t believe the information is being crowded out; you simply have to search for it instead of seeing it on the 5 o’clock news.

Is traditional journalism in a crisis right now—and is there such a thing as “good” or “bad” infotainment?

Brown doesn’t see a crisis in news today. Getting out information in a democracy has always been messy one way or another. “What we need from you,” he told the audience, “is some diligence in what you do” as readers and consumers of news.

Latibeaudiere said that although “news” has become a bad word, people are still getting it—perhaps in spite of themselves. And this isn’t a good thing, or a bad thing.

Cieply said it’s not a crisis simply because the world of journalism wasn’t wonderful before. However, “it is a time of enormous chaos,” he said. “It’s incumbent on everyone to do a lot more thinking about what they’re reading.” And one benefit of all this confusion is that people are talking and sharing more about the process of trying to figure out this brave new world—“and that’s a good thing.” 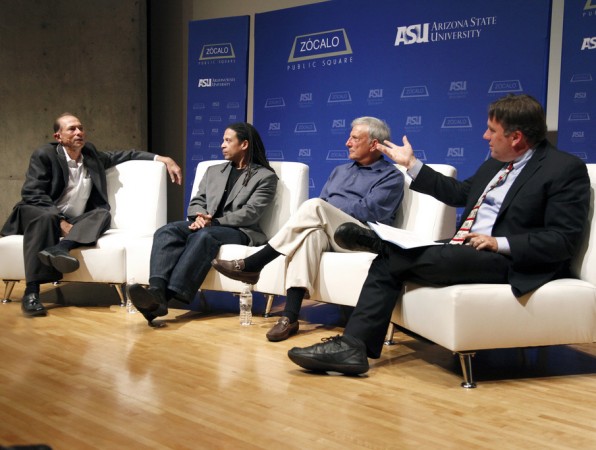 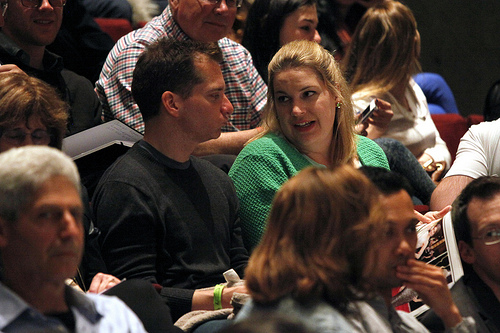 It was a standing-room-only crowd at MOCA Grand Avenue 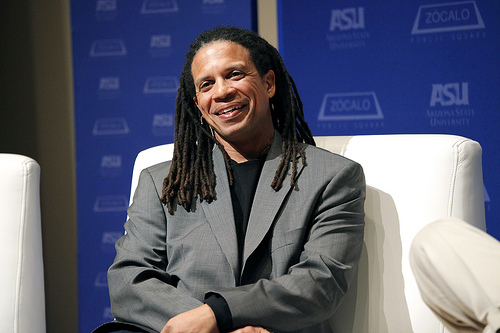 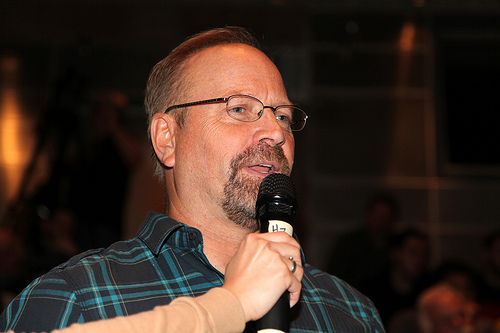 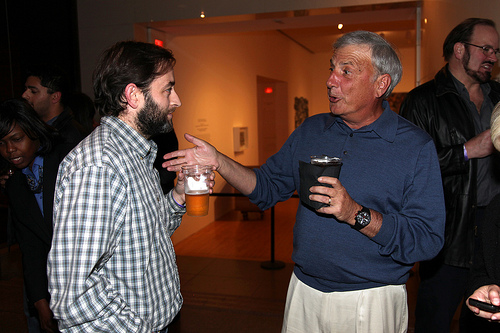 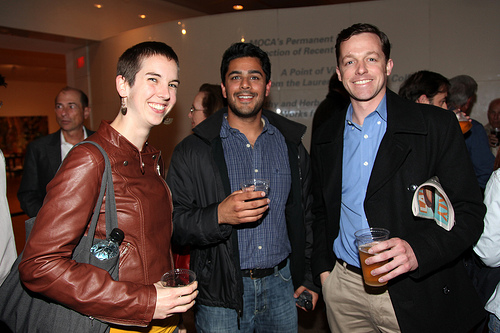