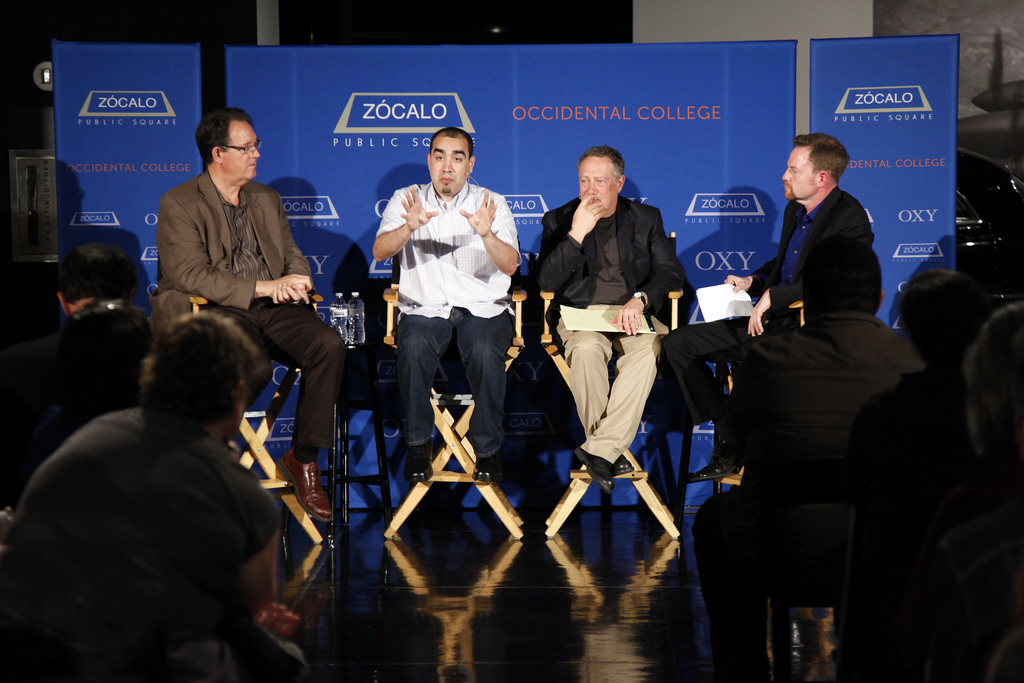 Los Angeles is a city increasingly made up of native-born residents and fewer and fewer immigrants. Occidental College cultural critic and historian Thaddeus Russell opened a conversation on L.A.’s post-immigrant future, at an event co-presented by Occidental College, by asking the crowd at the Petersen Automotive Museum to imagine the smells, tastes, and sights of Los Angeles today. Then, he asked them to imagine these same sensations in a Los Angeles without immigrants. It seems impossible, said Russell, and yet we are heading toward a Los Angeles in which newcomers will be a distinct minority.

University of Southern California demographer Dowell Myers said that in his view, the scariest thing about this new L.A. is that we’re going to “depend on these kids who are native Californians” to become homebuyers and taxpayers and workers in our economy—“and they’re going to our schools right now.” If we don’t get their education right, we don’t get our future right.

Chapman University urban theorist Joel Kotkin called a more native-born city “a mixed blessing at best.” Great cities, he said, have always been “made and recreated by people who came from someplace else.” Right now, Los Angeles is at or near the bottom of almost all the growth indices we use to measure American cities. “How we deal with it is going to really determine how L.A. evolves,” he said.

Myers said that we still have a lot of immigrants in Los Angeles—we’re holding steady at 36 percent foreign-born, second only to Miami at 51 percent. “It’s good to have more people coming in and have more dynamism,” he said. But it’s not good for immigrants who can’t afford the cost of housing to come to Los Angeles—as happened in the 1980s.

How, Russell asked Kotkin, have economic policies—what Kotkin has called a “war on the middle class”—contributed to this drop in immigration?

Kotkin said that our post-industrial economic policy has moved opportunities for immigrants to other parts of the country. He pointed to an Intel plant in Utah—built there in part because of lower energy costs—as an example of the way California’s industrial base and the middle levels of its economy are eroding.

But Myers said that a better bet for building the economy is to invest in education; for every dollar put into public higher education, he said, you get four back—10 years down the line. We’re not willing to wait for that in California or America, and we’re going to be feeling it 10 years down the line, when older people are trying to sell their houses—and younger people can’t afford to buy them.

Immigration, said Russell, has also had a huge impact on the city’s culture, from the many languages spoken here to the infinite kinds of food that can be sampled at Southern California’s restaurants, food trucks, and roadside stands. Will a post-immigrant Los Angeles be a more assimilated and homogenous—and therefore less delicious—L.A.?

Occidental College sociologist Richard Mora said that Los Angeles has long been defined by its mix of ethnicities, and he doesn’t think that’s going away. And as long as there’s money to be made in tasty food, that’s not going away either. “Food trucks were here before the fad, and they’re going to be here after the fad,” he said. But Mora also wanted to home in in the notion of “assimilation,” which most of us associate with achieving “the American Dream.” But the numbers on assimilation versus economic achievement do not work quite the way people seem to think.

Myers concurred: Asian-Americans have the highest levels of academic and economic achievement of any immigrant group, he said, but Latinos are faster to take on the language and cultural habits of their fellow Americans—in short, they are faster to assimilate. Asian immigrants arrive in America with higher levels of wealth and education—but, again, low-skilled Mexican immigrants assimilate more thoroughly over time.

Should we, asked Russell, continue to assume that assimilation is a good thing and our desired end goal? And, if not, “how do we get all these ethnic groups to get to be good Americans?”

“Assimilation constantly changes,” said Kotkin. You need look no further than to Barack Obama—“the shift in who’s the hero, who are cultural icons”—to know that assimilation is no longer about Anglo-Saxon values.

Russell confessed that he’s not sure he’d like to live in a post-immigrant Los Angeles; wouldn’t it be boring?

Myers said that a post-immigrant California may be a little more boring—and will definitely be older than it is today. But a post-immigrant Los Angeles will still be a border city with a diverse set of influences; it’s not going to disappear, like a Little Italy. Mexicans, unlike Italians, are still going to continue to come—just in smaller numbers.

Los Angeles will maintain its immigrant feel, added Mora, because of our proximity to Mexico—and because the U.S.-Mexico border has one of the sharpest wage differences of any border in the world. And, if the economic situation in Los Angeles improves, immigrants from all over the world will seek it out once again.

In the question-and-answer session, an audience member asked what the panelists would offer as suggestions for improving L.A. in the coming years.

Myers said that the city is already getting better, but the positive change can be accelerated—as long as we understand that the city is never going to be like it was before. “If we try to go back to before, we fail,” he said. We need to be able to articulate how the city has changed in order to get people to rally around it.

Kotkin said that the answer lies in focusing on economic growth—especially growing science, technology, engineering, and math jobs, where we’re currently below the national average.

Mora said that revising Proposition 13 has to be part of the equation at some level—at the very least ensuring that corporations and business interests don’t keep taking undue advantage of it. 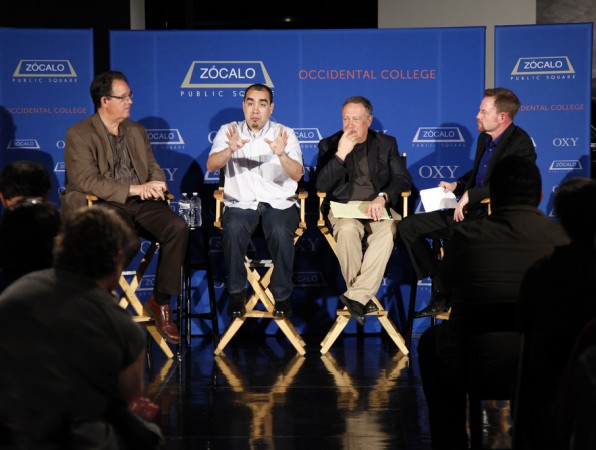 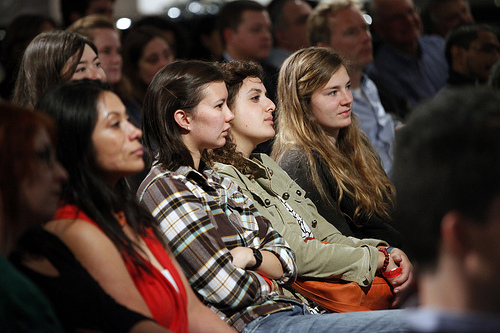 The audience at the Petersen Automotive Museum 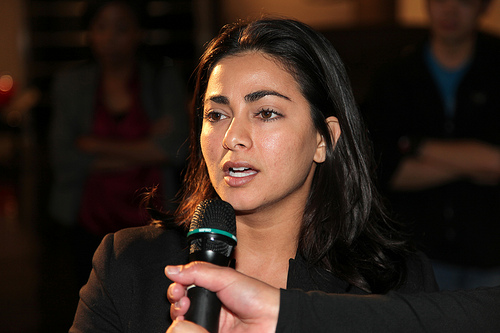 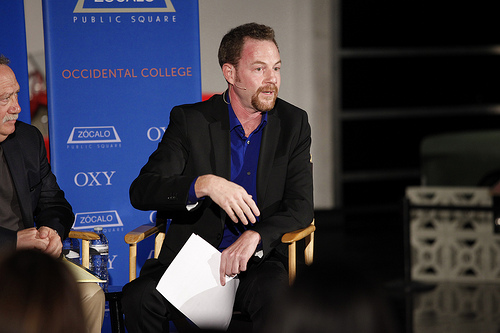 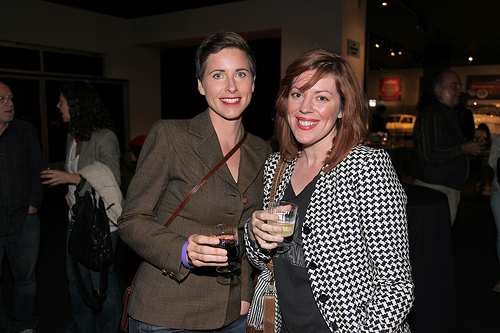 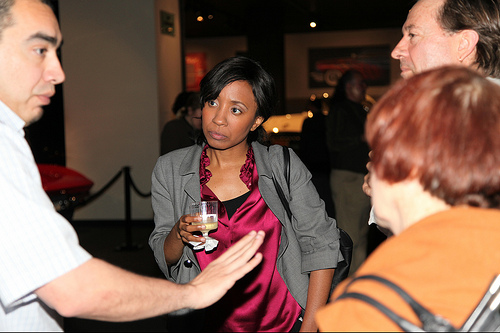