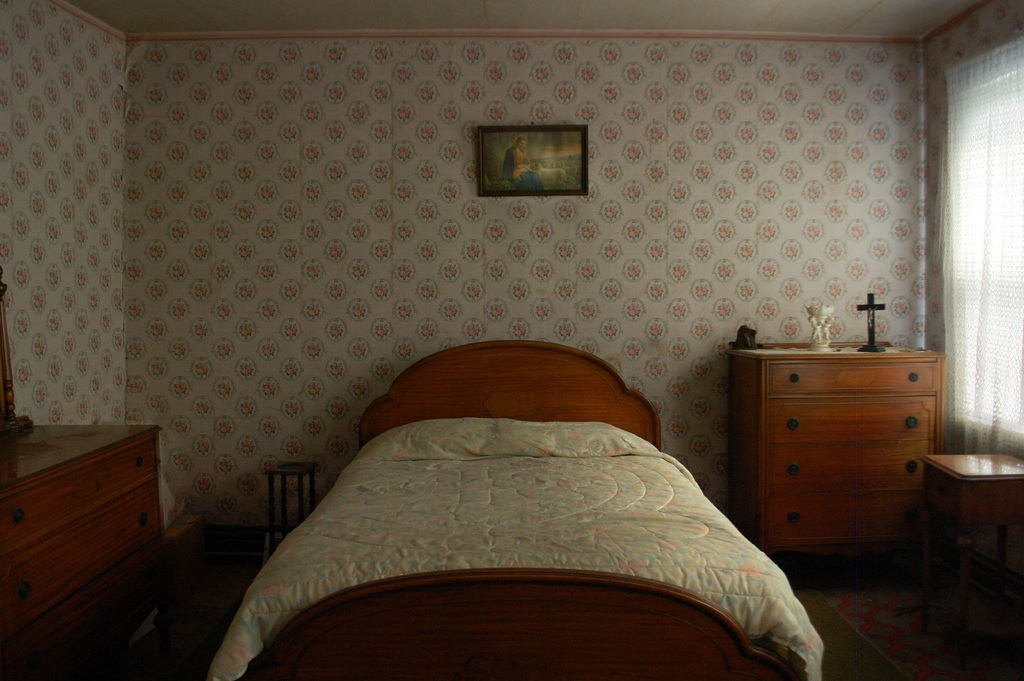 A man lives in an old house converted to apartments.
There is still a servants’ staircase, but now it
leads to a blank wall. And the walls are paper,
the ceilings must be crepe paper: every night
the man hears his upstairs neighbor getting it
from somebody, hears her gasping, even hears
her bed squeaking. Midnight, 2 a.m., he gapes
at the ceiling, he almost expects to see
their fluids come suffusing down through
the crepe paper, enough to put out the cigarette
he’s smoking. How they go at it, and how
he admires them: they must know he can hear,
because they must have heard him cursing when he
cracked his shin on the bedpost, they must have heard
him practice his bass. He’s even thought of
serenading them, up through the old ceiling
of the old house, but finally decides not
to complicate matters. And soon his upstairs
neighbor moves to another state, another
woman replaces her. This new woman has
no lover, all that comes through the ceiling now
is her footsteps and old delta blues, but
every so often at night he hears her cough, not
a smoker’s hack like his own, but a quick
bark, almost like she’s embarrassed. Well, he thinks,
who can blame her with all that old sex
drifting around up there? He imagines her
bolstered up with pillows reading a novel
with the word love in the title. Again he
believes he should play, really shake the old place
so she’ll feel it in her spine, but knows
it will only turn out he won’t be able to say
good morning to her when they meet picking
up the paper. Every night he lies in bed
thinking about these women, the one
loud with her lover, the other holding her
loose fist to her mouth to cough. Which one
makes him feel sadder? It is impossible to say.
He wishes them well, he is embarrassed by
both of them, by himself. In fact, the only
thing he can think of that isn’t embarrassing is
the people who built the now ramshackle
house, the mild pranks the children must have played
on the servants. Maybe the ghosts of children
share his room, maybe they grew up and moved
away, or they may be together still, down
at the wealthy cemetery. The servants
ascend the staircase, up through the paper wall.