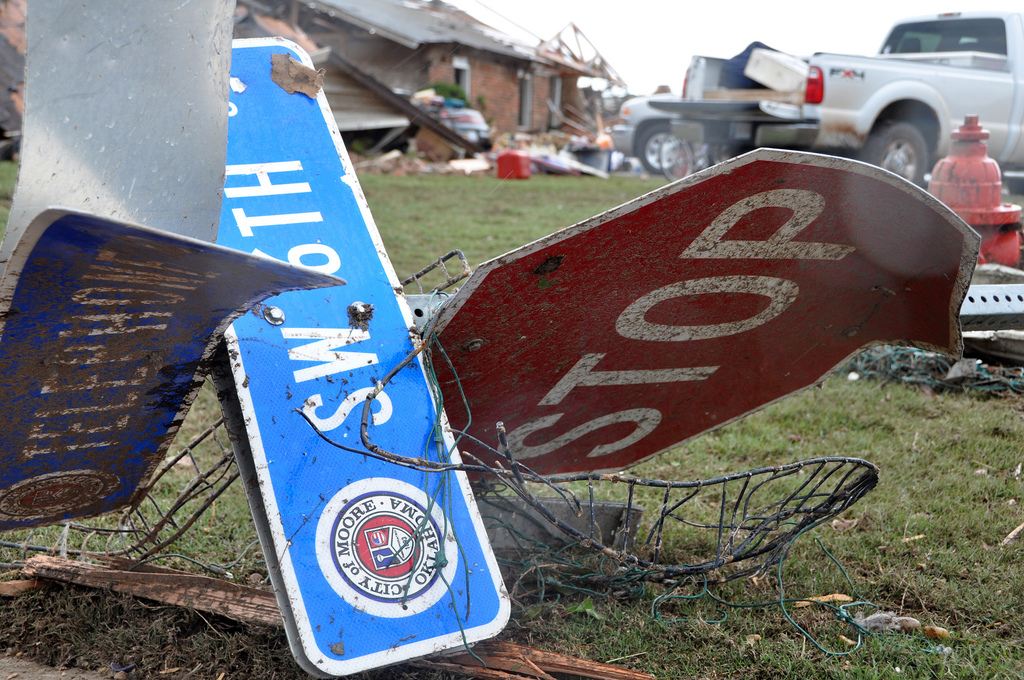 When my parents died, my husband and I bought their house in Norman, Oklahoma and moved in. It’s the very same house they built in 1952 in anticipation of adding a fourth child—me. The house stands five miles from the tornado path in Moore. But we’re not going anywhere.

I’m an Okie through and through. My mom’s grandparents founded and settled the town of Graves, Oklahoma; my great-grandpa was postmaster general. Other than a year of school in Wyoming, and a very short and ill-fated move to Washington State, I’ve spent my entire life in and around Norman, a college town of 100,000 (more if you count the students at the University of Oklahoma).

Dealing with tornadoes and their aftermath is an inescapable part of Oklahoma life. We fear the storms for what they can take from us but also respect them for the mercy they sometimes show. There was a tornado a few years ago that destroyed a Love’s Country Store, part of the convenience store chain. The storm took the building, the freezers, and the fridge boxes—but left standing, untouched, in what used to be the middle of the store, the glass ornament display. Not one ornament was knocked over or broken. Why? How? I don’t know. In this most recent storm, a bowling alley was destroyed—except for the back half of one lane. On that lane were 10 pins still standing in the triangle shape, ready for a ball to knock them over.

I have been through too many storms to count, and I have been lucky: I’ve not personally experienced major damage or injury. But I’ve had several close calls.

The closest was when my older daughter Kristen was knee high to a grasshopper. It was about 1986. We were having a barbecue party and poker game at our house when a storm started to form. Inside on the TV, Gary England, every Okie’s favorite weatherman, said, “You folks eight miles east of Norman, I can’t stress how important this is—.” And then the electricity shut off.

We went outside and saw a funnel drop in my front yard. My only thought was, “Oh, shit, 20 people are going to die at my house today.” We couldn’t move or talk or breathe. Fortunately, the storm touched down and went right back up. No one was hurt and nothing damaged. I never want to be any closer.

I have a sign on my fence now that got stuck during a storm; it says something about not being responsible for the death of any horse. It fell from the sky one day years ago, as I was talking with my neighbors after a storm threat had subsided. The sign turned out to be debris from a tornado that about 30 minutes previously had struck Chickasha, a town approximately 30 miles southeast of my house.

We know much more about tornadoes now than when I was a kid. Back then, we’d escape the house and go to my father’s office building on the University of Oklahoma campus, because it had a basement. This could be boring, since we’d be there for hours. In the ’50s and ’60s, there were no portable TVs, cell phones, or even transistor radios, and we didn’t always know when the danger was gone. My siblings and I would pass the time playing a game called “spoons”—even though we often had to play it with pens—until our dog Second had to be taken outside to pee. If the weather looked clear, Dad would let us leave.

These days, when a storm arrives, there is plenty of information. With this most recent tornado, I started taking precautions as soon as I heard it might hit Norman. But as the tornado got underway, the forecasters realized it was going to hit north Norman, not the south side where I live. Then I started worrying about others. My son was in north Norman, and I checked in to make sure he wasn’t playing storm chaser (sometimes he does, regrettably). I have several friends in the tornado path so I started trying to find out about them. They are OK, and so is their property.

But there are so many who aren’t OK this time.

To see so much shock and confusion on the faces of people is heartbreaking. But a time like this also reminds me of why we live here: because we know and can depend upon the people and communities here. During this storm, teachers threw their bodies over children to protect them from a tornado. The testament to their bravery is the fact that while two elementary schools were destroyed, there were only nine child fatalities. On the news is a story about a father who donated huge amounts of diapers, wipes, and baby supplies to the relief effort. He did this because his infant son died of an illness a month ago, and his family didn’t need the supplies. I know the mother of that child: I watched her grow up with my daughter Stephanie.

So I couldn’t think of leaving a place like this. Admittedly, I might have to make an exception for the month of May. This latest F5 tornado, the strongest category of storm, came on May 20 of this year. We had a strong F3 tornado back on May 12, 2003 and another F5 on May 3, 1999. If you look at all three tracks, they are very close. But I’d still be back in June.

After the storm, strangers immediately began clearing debris with other strangers. Folks with chainsaws didn’t have to be asked to take care of trees that were blocking the road. The university immediately opened up dorms to house anybody who needed a place to stay. The other night, people were lined up for more than three hours to drop off various donations. There are waiting lists to volunteer.

One big problem right now in the damage area is the street signs. There are none. Many landmarks are gone too. First responders and insurance people who don’t know the area are getting lost. That slows things down—but there also are plenty of local people to help them find their way. Living here, you don’t need a sign to know you are home.