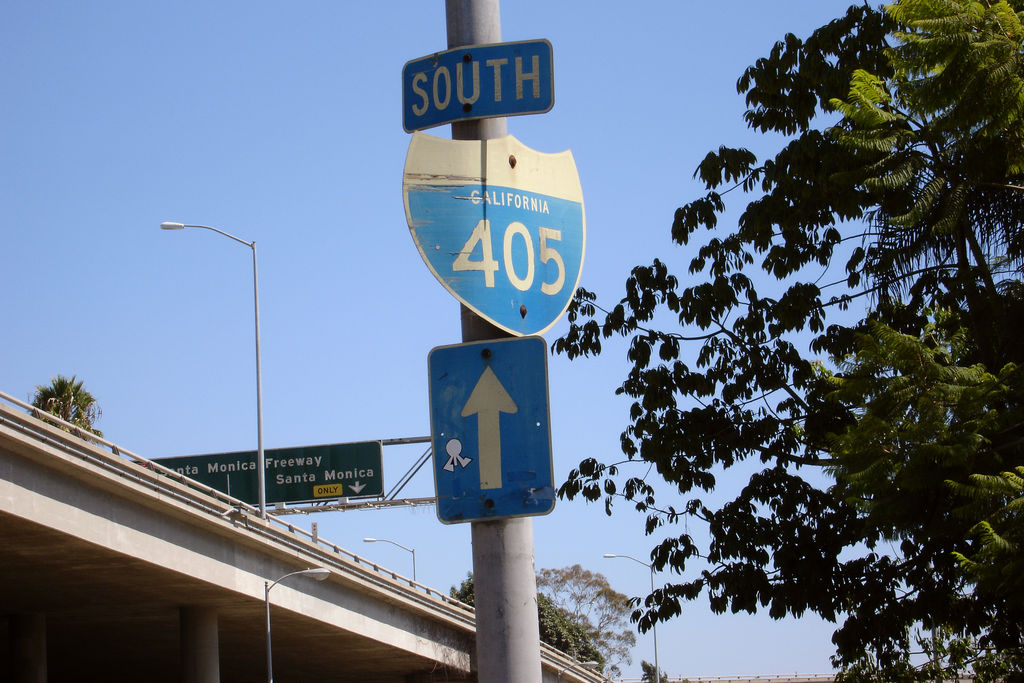 Don’t you hate it when a driver makes a wide turn into your lane?

When I first moved to Redondo Beach, I noticed this happening regularly at the Southbound 405 Inglewood Avenue off-ramp. At first, I wasn’t sure what to do about it.

The problem was one of design. There were two lanes from which one could turn right at the bottom of the off-ramp—the right lane and the center lane—but those two lanes merged into three lanes heading south on Inglewood. It was a dangerous mismatch between the off-ramp and the road.

The result: cars in the further right of the two right-turn lanes were veering directly into the center lane on Inglewood—a turn that’s illegal and dangerous. That center lane, as well as the left lane, should belong to the cars turning right onto Inglewood from the center lane of the off-ramp.

At one time, a white solid line had helped guide the right-lane drivers and allowed them to stay in their far-right lane, but this line had faded with all the traffic.

I took the off-ramp daily—it was the closest 405 exit to home—but I continued to observe quick swerves to avoid collisions, frustrated honks, and even a few middle fingers.

The situation reminded me of the bystander effect—what happens when so many people see an emergency or a dangerous situation that no one intervenes. And the danger was both apparent—and easy to fix with a simple white line.

So I called the main line for the city of Redondo Beach.

I was transferred to Bob Boardman in the public works department. I explained the situation, and he said he’d check into it. Two weeks later, he called back saying that he inspected the intersection and didn’t see any problems with the painted lines or traffic.

I figured I’d done a poor job of explaining it over the phone on our initial call. I’m a marketer and producer, and I know the power of photos to make a problem easier to understand. So it was time for some recon. I grabbed my camera, drove to the intersection, and parked my car in a storage lot nearby. It took less than 10 minutes to take photos and a short video showing nearly every car in the right lane taking a wide turn and veering into the center lane.

I loaded the photos into a doc, wrote captions, and e-mailed it to Bob. To his great credit, Bob called back within a few minutes and said he would put in the request to paint the solid line.

Nothing happened for a few weeks, so I followed up asking for a status update. He wrote back, “The City does not have the equipment to paint lane lines. Therefore, any lane striping requests are contracted out and included with capital improvement program projects which have a striping component. The striping on Inglewood Ave should be included with the next residential street rehabilitation project which will begin this summer.”

I was disappointed at the delay, but not surprised. I had low expectations, perhaps unfairly, of the city and its ability to act quickly.

But then, one beautiful summer day, only three months after I sent my photos and letter, I took the off-ramp on my way home and noticed a new white painted line that glowed majestically. The car ahead of me stayed in its right-hand lane. I felt a sense of accomplishment.

The lesson I learned is that when you see a clear threat to safety, it can pay to point this out. When multiple crosswalk signs on the city’s new bicycle and walking path weren’t yet working properly, I spoke up. And when big vehicles parked on our corner were making it hard to see the emergency vehicles that use our street as we came out of our driveway, my wife and I took photos, drew a map on a giant poster board, with sightlines, and presented it to the city. Within a month, the city painted one spot on the corner red so cars can’t park there and block the view of oncoming traffic.

It’s been five years since my foray into exit redesign. Today, the line has faded again and the problem is back, so Mr. Boardman will probably be receiving an email from me shortly.

But now that I know what you can accomplish by taking action, I’m considering a more direct measure. Call it Option B. I can’t say exactly what I’m contemplating, but, if you see a slightly crooked new white line at that intersection in the next week, I want you to know it wasn’t me.