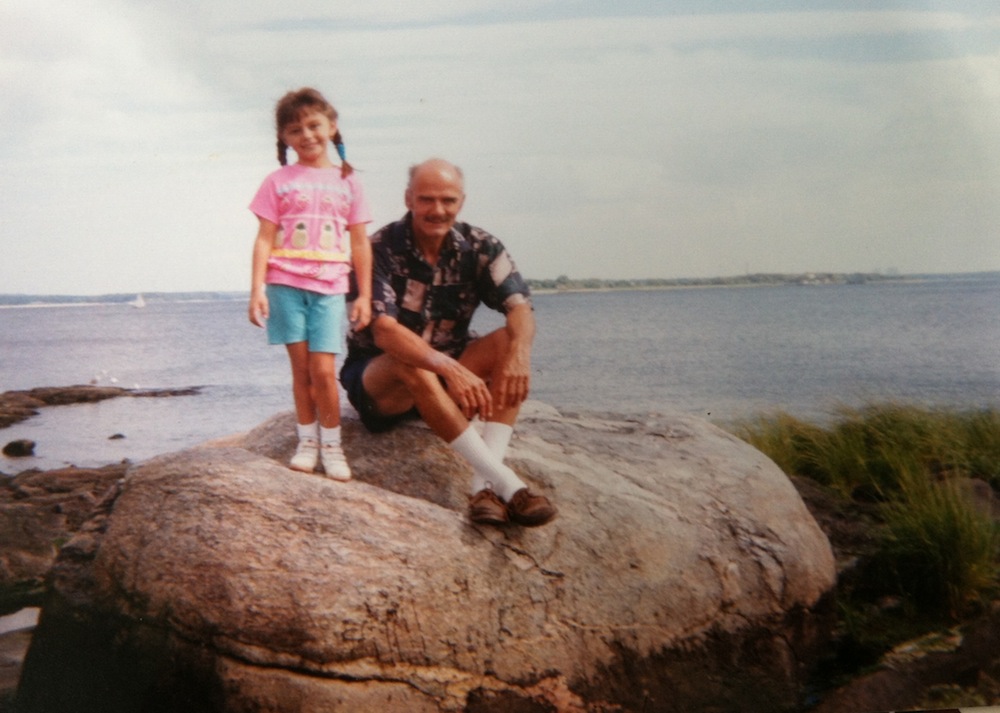 I grew up on an unremarkable dead-end street in the Bronx. But its end wasn’t dead to my father and me: It was a place where the world came alive.

A crooked metal guardrail barred cars from crossing, but every Saturday, my father would lift me over it. On the other side, the grass was tall and frayed and flowering at the top, like a field of old toothbrushes. The landscape was sprinkled with red, rusted cars that resembled the empty clams you cast aside in seafood restaurants. We’d wander past windshields shattered into a thousand sparkling shards, occasionally finding a sheet intact—a kind of illusion glass that bends, never breaks. Beyond the brush and scrap metal, the East River glinted in the sunlight.

The neighborhood kids called it “the junkyard,” but to us this empty lot was a tribute to time’s passing. The weeds that shot up through punctured tires and weaved themselves into car frames were a stark visual of nature’s revenge on the industrial world, reclaiming its place in the order of things: man-made metal decays, but the plants are reborn each year.

Robert Moses, the hubristic urban planner, wanted to build a beach and bus terminal along this coast, but the plan was never carried out. In the 1940s and ’50s, the space was used as a garbage dump, and in the ’60s it was covered with dirt and ceded back to nature. My father and I were treading above a burial ground: layers of refuse from the generation before lying deep within the earth like corpses.

Exploring and interpreting this rugged landscape encouraged us to venture onto even more ethereal terrain together. Where did grandma go when she died? I’d ask my father. Whom did dad love more, my brother or me?

When we reached the water, warm and sun-wearied, we’d sit on rocks and gaze at the Whitestone and Throgs Neck Bridges that cross the East River toward the Manhattan skyline. It was at that moment that our talk would give way to a deep, peaceful silence. Our adventures always culminated in this quiet moment of solitude and togetherness, when we’d sit beside each other without speaking, in awe of all that surrounded us. We’d let the expanse of water and sky fill us, exchange only a smile or touch-of-hands before scampering back home again, bubbling with stories for my mother.

Before my 10th birthday, we left the Bronx and moved to the Hudson Valley, where our nature walks took on a more traditional feel: The Catskill Mountains replaced city skylines. But the quiet moments when we rested in the peace of each other’s silence continued—as we stood before the Hudson River, or followed a red-tailed hawk gliding in the wind overhead.

When my father died the summer before I started high school, my family returned to the Bronx for the funeral. After the procession, when we got in the car to drive back upstate, my mother paused, her foot on the brake.

“Want to go see our old house?” she whispered to me while my little brother dozed in the backseat.

“Yes,” I whispered back.

Sometimes we revisit places to relive them—to reawaken memories left behind. We return to touch our pasts, believing words will be heard in the air in which they were first uttered, or a feeling restored where it first stirred within you.

My mother made a slow, careful turn onto our old street, and we craned our necks to the left, scanning the unfamiliar landscape for something we remembered.

The brown and white home I grew up in was gone. A row of identical brick condos now stood before us, the windows reflecting our purple car like a distorted carnival mirror. I saw our faces small and shape-shifting in the glass: a taunting glimpse of our former selves.

My mother’s hand touched mine, and I could feel it shaking.

Our hearts are too small to hold all our memories, so we leave some deposited in the landmarks of our personal narratives like invisible relics. But what happens when those spaces have been lost? Do the memories perish along with them, or wander restlessly like ghosts, impossible to touch or see?

As my mother made a U-turn in the driveway, I fought the urge to look toward the junkyard, afraid it, too, had changed, and that a glance would efface and replace the memories I still had left.

Today, I hear, the junkyard has been cleaned out and turned into Ferry Point Park, boasting “unparalleled views” of the East River and Manhattan skyline.

I know the inevitable urge to return will creep into me, and I’ll feel compelled to drift back to the junkyard. I wonder if the land will look indistinguishable, or if, like a palimpsest, it will show me traces of what lies underneath. Or perhaps, after a long walk to the river’s edge, I’ll marvel once again at the scene before me, stopping to contemplate the vast and peaceful silence that expands out across the water, and stretches between my father and me.