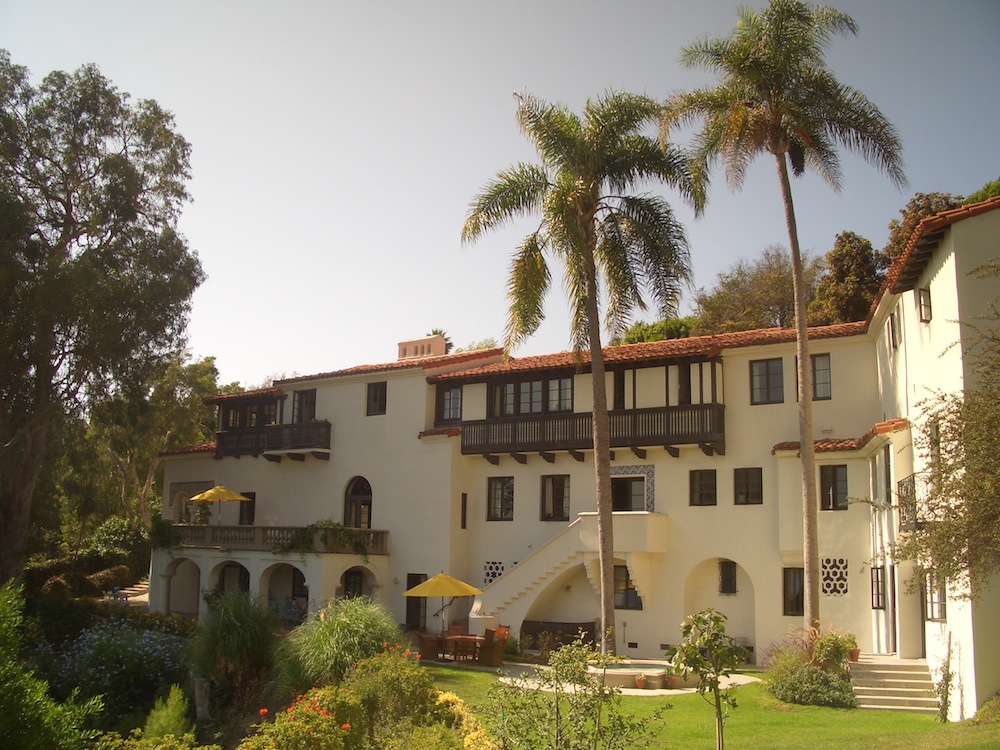 In 1927, the Los Angeles Times, in cooperation with the investors Arthur A. Weber and George Ley, built a “demonstration home” in Pacific Palisades. The project was supposed to attract wealthy buyers to settle in a part of Los Angeles that had dirt roads and was remote from schools, markets, and medical care. The progress of the new house was reported in the Times on a weekly basis.

Today, that home, called the Villa Aurora, has become a haven for intellectual life, but the journey was a difficult one, producing a quintessentially Los Angeles story of exile, artistic creativity, global connection, education, and, of course, real estate.

The original Villa Aurora, which you can see as you drive up Sunset Boulevard from the ocean, was a 14-room Spanish Colonial Revival-style house of 6,700 square feet on a 19,000 square-foot lot. Weber, the investor, traveled to Andalusia and drew inspiration from a small castle in the vicinity of Seville. In order to perfect the European atmosphere of the house, wooden ceilings were shipped from Spain, and a Renaissance fountain was imported from Tuscany. Local touches included redwood walls and Moorish-inspired tiles made by the Malibu Tile Company. The house was also equipped with the latest technical conveniences, such as an electric garage door and a trash compactor. A theater organ was part of the design and accompanied the projection of silent movies.

Convenience didn’t protect the first residents—Weber and his family—from hard times. After the crash of 1929, the Webers were forced to rent the house from the bank. After they moved out in 1939, the house remained vacant for the next four years.

Then, in 1943, German exiles Lion and Marta Feuchtwanger purchased the home. The price was $9,000.

Lion Feuchtwanger was a novelist and playwright who was prominent in Weimar Germany and already a foe of the Nazis before they came to power. When the Feuchtwangers moved into the Villa, the house was so run-down, that—according to Marta Feuchtwanger’s oral history—they spent their first nights in the garden in sleeping bags. One of their neighbors, a great admirer of Lion’s writings, sent a handyman to support them in turning the Villa into a livable home. With his help, the Feuchtwangers were able to get rid of the knee-high dirt, cobwebs, and dead animals, replace the broken windows, and reclaim the overgrown garden.

Lion Feuchtwanger’s books were published and translated worldwide and attracted a large readership, allowing the Feuchtwangers to live comfortably. With contributions to the European Film Fund, the Feuchtwangers supported colleagues who were financially less successful. Lion also made money selling screenplays to Hollywood producers, even though, in reliably Hollywood fashion, none of those screenplays were turned into films during his lifetime.

One legacy that remains with the home is Feuchtwanger’s library. Before coming to the United States, Lion had lost two libraries—the Nazis confiscated his house and library in Grunewald in 1933, and he was forced to leave behind a second collection in Sanary-sur-Mer, France, in 1940. Today, many valuable books can be found among the 30,000 volumes in Feuchtwanger’s last library: a Nuremberg Chronicle dating from 1493, Goya prints, and collector’s items such as letters by Napoleon and a signed first edition by Voltaire. Feuchtwanger also compiled reference collections for each of his books. Today, 22,000 volumes are still at Villa Aurora.

After Lion Feuchtwanger’s death in 1958, Marta became the caretaker of his estate. In 1959, she bequeathed the house and Lion’s library to the University of Southern California (the 8,000 most valuable books are still housed at the USC’s Feuchtwanger Memorial Library). She continued to live at Villa Aurora until her death in 1987.

The house might have languished on the hill in Los Angeles—except that German writers and thinkers, recognizing its significance, came to its rescue. In 1989, a private nonprofit organization in Berlin, the Friends of Villa Aurora, bought the house from USC and commissioned the architect Frank Dimster, a USC professor of Romanian-German origin, to renovate it.

Dimster had experience with old houses (he had restored Frank Lloyd Wright’s Freeman House in Los Angeles), but Villa Aurora was a challenge even for him. The villa lacked a solid foundation and had received only minimal repairs in the previous four decades. The hill on which it was built threatened to slide onto the neighbors’ terrace at any moment.

First, the entire house had to be lifted in order to build a solid foundation beneath it. Then the hillside had to be stabilized by cement pillars buried deep in the ground. Air conditioning was added as well as an entirely new heating system. All the pipes and electrical circuits were replaced, and all of these changes were accomplished without altering the appearance of the building in any way. After the various renovations were finished, the Villa Aurora was placed on the list of Historical Landmarks in California. In appreciation and recognition of his accomplishment, Dimster was awarded the Bundesverdienstkreuz, the highest order of merit, by the Federal Republic of Germany in 1996.

Since 1995, Villa Aurora has served as an artists’ retreat, offering residency fellowships to writers, filmmakers, visual artists and composers. While still owned by the Berlin-based nonprofit, the entire operation is funded by the German Federal Foreign Office and the Federal Commissioner for Culture and Media. Its fellows and the Friends of the Villa Aurora have made it an important gathering place for people in and outside of Los Angeles for conversations and cultural life.

And it remains a haven for those who face persecution at home. Villa Aurora, in cooperation with human rights organizations and the USC, awards a special nine-month Feuchtwanger Fellowship to writers or journalists from countries restricting freedom of expression.