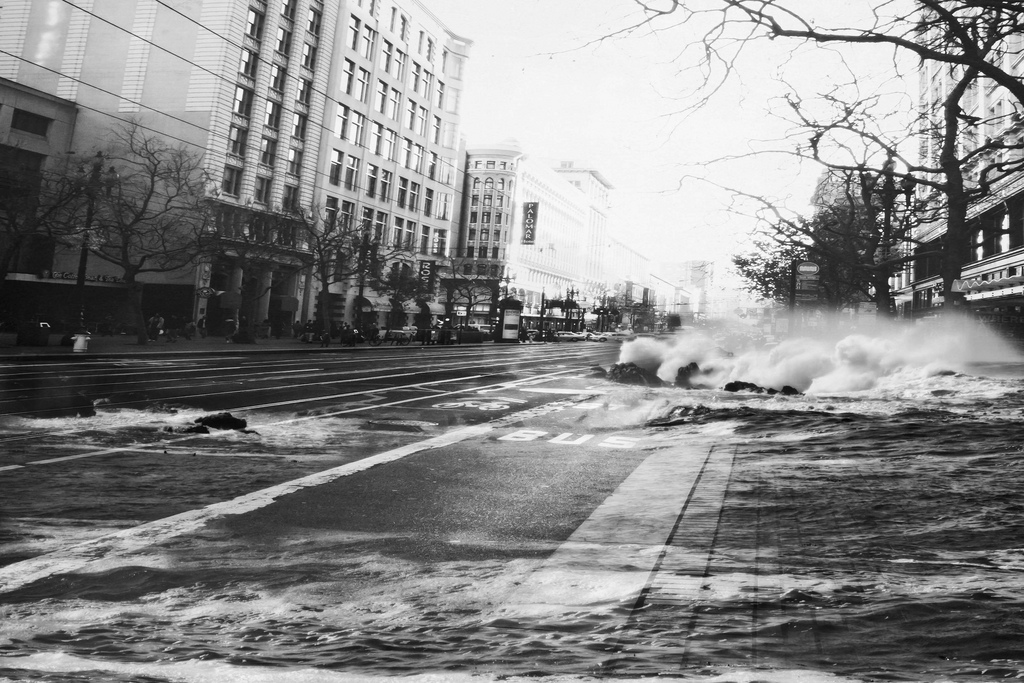 Melting Greenland ice sheets. Calving glaciers. Fresh water released into a warming ocean that floods great cities and has the potential to kill thousands. The media are full of such dire predictions for the future every year that temperatures rise. Others tell us to calm down, that the problem of rising sea levels is a long-term challenge and there’s no need to worry. What’s really going on, and what should we do?

I contemplated this question the other day while sailing out of Santa Barbara harbor. About five miles offshore, we passed over the Ice Age coastline of 15,000 years ago, when the Pacific was 300 feet lower than today. I looked back and wondered what the ancient landscape had looked like when there were only 12 miles of open water between the mainland and Anacapa Island. Then I wondered what the now densely populated coast would look like if sea levels rose two or three feet, as seems possible within a century or so.

The more I thought out on the ocean, the more I realized that it wasn’t the rising sea level I worried about as much as it was the predictions of more frequent, more extreme weather events. Our local southeasterly storms could bring massive swells and sea surges to low-lying cities and towns. What would become of Santa Barbara then?

Being an archaeologist, I start in the past when evaluating a problem like this. Consider the sea level history of the Golden Gate and the San Francisco Bay. Until about 9000 B.C., the Golden Gate—the stretch of water over which the famous bridge sits—was dry land with an estuary cutting across it. That estuary ran fast and deep when mountain runoff cascaded to the ocean in spring. This spring river exited through the gate onto a wide continental shelf and into the then much lower Pacific. Upstream, the estuary widened, but still flowed fast, with none of the swamps and flat mudflats that define San Francisco Bay today. Pine and redwood forests pressed on the river, mantling a hilly landscape. Of people there were few signs, just the smoke of an occasional campfire, or a few spear-carrying figures walking along the bank of a tributary stream.

Between 9000 and 4000 B.C., the Pacific rose steadily and quite rapidly, sometimes about 0.75 inches annually. The rising ocean inundated the Golden Gate and flowed inexorably into the estuary inland. Seawater covered the flat lands inside the Golden Gate, ponding the rivers, forming a huge, shallow water bay. The water levels under this rise could vary, up and down, by as much as four to five feet annually—a volatile enough inundation to change anyone’s world. After 6,000 B.C., the sea level rise slowed as warming stabilized. The slowing had a dramatic effect on the Bay environment. Extensive tidal marshes formed along the shores, the largest along the Pacific Coast of North America. Here people could harvest all kinds of foods—fish and shellfish, birds and swamp-loving land mammals, and a broad constellation of edible marsh plants. For thousands of years, until the coming of Europeans, a gradually growing Native American population thrived on the shores of the Bay.

Elsewhere along the Pacific Coast, continental shelves vanished, Southern California’s Channel Islands shrank, and extensive wetlands formed along low-lying shorelines and bays. Then, just as California’s population exploded after the Gold Rush, the sea level rise resumed, as a direct result of warming triggered by human use of fossil fuels. Reliable measurements from the Golden Gate document a rise of seven inches over the past century. But the Bay has changed profoundly. Millions of people now live along its heavily urbanized shorelines only a few feet above the rising ocean.

Subsistence caused by heavy pumping of ground water and extensive land filling has lowered the land and created what one might call a “launch pad” for storms. The sea surges and exceptionally high tides that storms bring could inundate vast stretches of the Bay Area, just as a shallow lake in flat terrain can overflow and spread its waters over fast distances.

Imagine a future when the runways at Oakland and San Francisco Airports remain partially underwater for weeks, even months, or when storm surges inundate freeways close to high tide level. The disruptions would be enormous, to say nothing of the flooding and destruction of buildings close to sea level. This future is a likelihood—not scientific space fiction.

Wherever you travel in coastal California, people crowd the shores with houses and vacation homes where zoning and topography allow. Their houses lie shoulder to shoulder along low cliffs and very close to the breakers on a calm day. Even today, exceptionally high tides bring breakers into people’s living rooms—and this under calm conditions. Imagine a future where sea levels are up to five feet higher. The danger from high tides alone will be much greater—never mind the more frequent storm surges of a warmer future. Yes, much of the California coast faces a relatively benign ocean, but severe storms are a reality even in the calmest of marine environments, especially when southeasterly winds and El Niño events bring steep waves to batter low-lying coasts and the properties that lie along them. Make no mistake: damage, in the billions of dollars, will occur, suddenly and with little warning.

What, then, can we do to protect ourselves against the rising Pacific? Do we wall off the ocean with massive sea defenses, just as the Netherlands has done for centuries? So far it has worked, but the cost has been enormous. And, despite their success, the Dutch are planning for 10,000-year storms and working on river drainages as a way of protecting against floods. In this country, long-term planning is at a virtual standstill. One notable exception: New York Mayor Michael Bloomberg has proposed a multi-billion dollar plan to protect the city that involves not only sea walls but also the restoration of coastal wetlands and other measures.

His long-term proposals, developed with the advice of experts, will take generations to come to fruition, if they survive bureaucratic reviews and attacks by special interest groups. It is hard for us to focus on long-term planning against climate change because, as a society, we’re locked into a media-driven obsession with short-term election cycles. There is, however, a gradual realization that we have to adapt to a warmer world and its rising seas.

There’s also a recognition that such adaptations must be local. Each community has a need for its own protective strategies. A sea level problem at Ventura, or along the Oxnard shore, requires different responses from those used for San Diego Bay with its coastal lowlands, or for Long Beach, Manhattan Beach, or Pacifica. The possibilities include zoning to prevent further development below a specific height above sea level, building higher breakwaters, moving and expanding seawalls, and restoring wetlands to help absorb encroaching seawater. Such local initiatives are more likely to achieve success than huge, grandiose schemes that take years to approve and even longer to put into action.

Herein lie our best defenses against the attacking ocean: not sensationalist headlines or forecasts of Armageddon, but rather careful and sober assessments of what havoc sea levels a foot or more higher will wreak on the California coastline. Such assessments must be made and acted upon by local communities, who know their own vulnerabilities best.