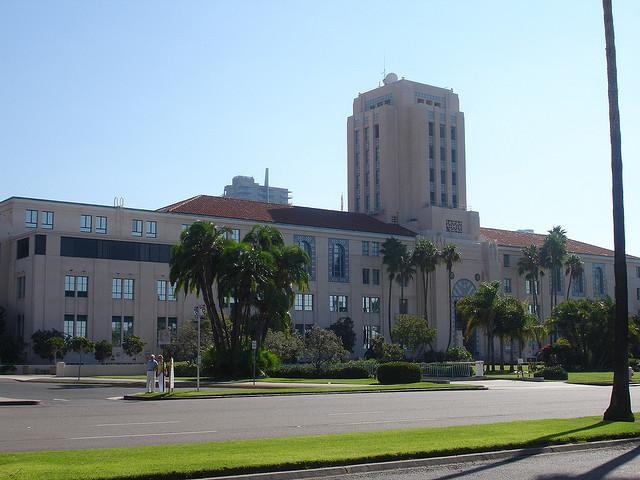 Stay classy? That may be too much to ask of San Diego these days.

“America’s Finest City” is in the middle of another one of its routine, self-destructive crises of local government. This one is an ugly fight over the fate of Mayor Bob Filner. He either has a nasty habit of intimidating women and needs help (that’s what the mayor and his supporters say, so you know things are bad) or he is a sexual harasser with a predatory move called the Filner Headlock (don’t ask) and should resign.

Either way, America’s Finest City, which has been facing off-and-on scandal, gridlock, and mismanagement for 20 years, remains desperately in need of better management. And, since this is California, such management could come from outside the city. This is a state with an enduring taste for outside interventions, from federal consent decrees to state takeovers. For Southern Californians especially, federal supervision is as much a part of life as the freeways.

Tapping into this tradition, a few San Diegans have raised the question of whether the city needs some sort of receiver—and they’re not talking about someone who might catch the wobbly passes of Chargers quarterback Philip Rivers. Several key city jobs are unfilled, major city projects are in turmoil; sexual harassment allegations are only one of Filner’s scandals. The idea of outside intervention has enough currency that Filner acted to pre-empt it, hiring a former county administrator and giving him full powers to make decisions, presumably so someone will be in charge while Filner fights to save his job.

Perhaps this California instinct for turning power over to unelected administrators makes sense as a product of desperation. But the record of the outside saviors is mixed at best.

The state prisons, despite some improvements, remain a mess despite years of federal oversight. At various times over the past two decades, Los Angeles, like a grounded teenager who can’t be trusted with the keys to the car, has been forced to surrender some control over its police, sheriffs, schools, and transportation authority to more trustworthy (at least in theory) outsiders. The state has taken over eight school districts because of financial problems, but often the cure hasn’t proved to be much better than the disease. The Oakland school district is still wrestling with accounting problems from the six-year state takeover. In Compton, the state cycled through administrator after administrator; when they found an effective, enduring one, he received so many threats that he had to receive protection from the California Highway Patrol, just like the governor does. The troubles in Inglewood’s schools have gotten so much worse under state control that there is talk of dissolving the school district altogether.

San Diego’s record is probably more disgraceful than that of any of these school districts, when you consider how persistently the city has squandered its sun-splashed advantages because of poor governance, corruption, and a civic culture so weak it makes L.A. look like Minneapolis by comparison.

The Paradise Plundered authors write: “The scale of San Diego’s governance challenges puts the city in a league of its own. The magnitude of its pension liability and budget deficits has few analogues in other locales. The state of disrepair of its basic infrastructure and the woeful levels of funding for core-city services put San Diego at the bottom even among other cash-strapped California governments.”

So if Filner is on his way out, who should take over San Diego? The Compton school administrator with the CHP detail, Randolph E. Ward, is now conveniently the superintendent of the San Diego County Schools.

But there’s a better choice, and he’s already working in the San Diego region. He’s an elected official who has proven he knows how to make progress and run a city that’s bigger and in some ways more troubled than San Diego.

I speak of Tijuana Mayor Carlos Bustamante. He’s a turnaround artist who has rebuilt roads, overseen a significant decline in violence (in the face of threats to himself and his family), presided over a revival of civic life and culture and an economic boom as Tijuana becomes a trade-savvy manufacturing powerhouse. He’s a native of San Diego (born in National City) who graduated from the University of San Diego. And he should make the San Diego establishment comfortable: he has a military background and was a businessman before becoming mayor in 2010. Bustamante, an old friend of Gov. Jerry Brown, has better connections in Sacramento than Filner ever will.

Putting Bustamante in charge would be surprisingly natural. Filner, while sowing chaos on most issues, has consistently pushed for more connections between San Diego and Tijuana; there’s talk of a common area code for the city, faster border crossings, and even a joint bid for a future Olympics. Why not go one step further and share a mayor? It might speed economic integration, including a plan for building a San Diego terminal for Tijuana’s airport.

San Diego’s future should matter to Californians; it’s our second-largest city. But if we Californians can’t fix it, maybe we should give the Baja Californians a shot at doing so.