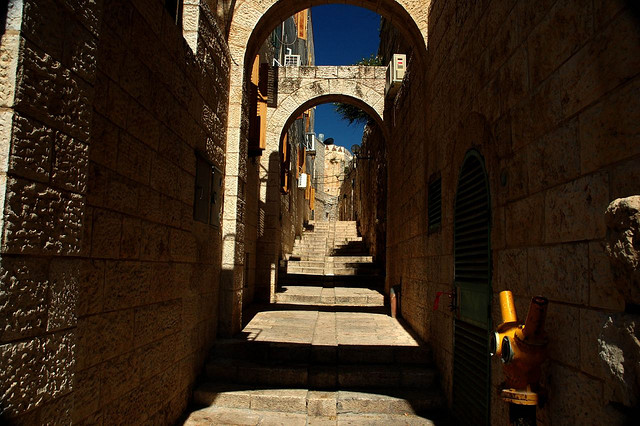 “Where are you going?” the grizzled, shaggy-bearded driver barked at me. After 15 hours of traveling, I was sandwiched between tourists on an Israeli shuttle en route from Tel Aviv to Jerusalem. Back in the States, I thought I had planned this trip meticulously.

But I had forgotten to write down one important detail: the address of my hostel.

I knew it was close to the headquarters of PresenTense, the organization that had brought me to Israel for a fellowship program that helps budding entrepreneurs develop businesses.

“Ehmm, around … 14 Hillel Street,” I stuttered. “The Little Jerusalem Hostel?”

The other tourists in the sherut van snickered. My driver was not amused. Apparently, there are two Hillel Streets in Jerusalem. I told him I wasn’t sure which one. He grunted and threw up his hands. As we sped down the highway, I gripped my disabled, non-roaming iPhone, willing Google Maps to beam me answers sans Wi-Fi. No luck. I half-listened to one of the bombastic, middle-aged American tourists babble about how the last time he was in Israel, there were no highways—just an expanse of desert roads. “It was before you were born,” he grinned at me.

But Israel had changed for me, too. The last time I came, in 2009, I was on a free Birthright Israel trip. It was like a Middle Eastern Disneyland—a terrific experience, but glossy and contrived, a packaged boondoggle for American Jews to become emotionally invested in the promised land.

Back then, I had become emotionally invested—but only to a point. Growing up in a secular home, I never felt completely comfortable in the American Jewish community. My father, the son of Holocaust survivors, was taught to conceal and downplay his Judaism as a kid. My mother, the granddaughter of a rabbi, felt constrained by religious rules and traditions. So they raised me more Jew-ish than Jewish.

When I was 8, my mother allowed me to decide whether or not I’d attend Hebrew school and have a Bat Mitzvah. I signed up because I didn’t want to feel like a leper at family functions. Our extended family was religious—and I envied how they connected through their Judaism. It seemed to enrich their relationships, like some inside joke I couldn’t understand.

I’ve blocked out most of my Hebrew School memories. My peers teased me, and the teachers sounded like Ben Stein. Jewish day camp, too, is a blur of Hebrew songs I couldn’t pick up, mean girls, and traumatic athletic competitions. The other kids seemed to make friends effortlessly—each one linked to the other through traditions and ancestry. I couldn’t figure out why I didn’t fit in.

That tension continued in college: When I was with other Jews, I was never quite Jewish enough. I didn’t get the jokes, wasn’t familiar with all of the traditions. But outside of the community, I was the token Jew. I cringed at jokes about bagels and curly hair, made at my expense. In which world, I wondered, did I belong?

Far from answering that question, Birthright muddled it. I left unsure if my magical trip contained any strains of authenticity. But it stoked my curiosity. I began to wonder if I could find a place in the Jewish homeland without the aid of Birthright. A place that so many of my ancestors—similarly displaced from their communities and disconnected from their roots—had found there.

Already, this second trip was completely different. For one thing, I was pretty much on my own. After I finally figured out which Hillel Street I was looking for, the shuttle driver dropped me on a desolate block. Since I arrived on Shabbat, almost every store was shuttered. I dragged my bags up the city’s hilly, cobblestoned streets, stooping under the weight of my swollen backpack. I was famished, sweaty, and lost in the promised land. Why on earth had I come to this city?

Earlier this year, I began developing Tribelle, a venture I hoped would jumpstart the businesses of struggling Israeli female entrepreneurs. My time in Israel and a journalism internship in Doha, Qatar during college had introduced me to women who, against all religious and cultural odds, were launching businesses to support their families. I was fascinated and inspired by their stories—especially because female entrepreneurship runs in my family (my grandma, aunt, and great-grandma all launched businesses). I became intrigued by the transformative potential of female entrepreneurship in the Middle East. As in other societies, and in many impoverished communities, women often run a range of small businesses that are essential to families’ economic security, including craft and jewelry businesses.

Of course, there are female entrepreneurs who are struggling around the world. So why did I choose Israel as my launch pad? I suppose I felt, in a way, like these women were the closest to my family—they were women who, in other circumstances, could’ve been my entrepreneurial grandmother or aunt. It was hard, at first, to articulate to my friends and family—people who still saw me as a fringe member of the community. But it felt natural to me to start my efforts there.

Through Tribelle, I connect Israeli women struggling to grow their jewelry businesses with American markets and reinvest a portion of jewelry sales profits back into Israeli organizations that incubate women’s businesses or teach business skills—particularly focusing on women from low-income or disadvantaged backgrounds.

That’s a bigger group than you might think. The Israel narrative we hear in the States often emphasizes a booming Startup Nation—a Holy Silicon Valley. But in reality, the milk and honey of tech only flows to a few. If you venture past the startup hubs of Tel Aviv, you’ll find a very different country, one where many people can be called working poor and struggle to support their families. Around 20 percent of Israelis live in poverty.

But here’s the thing: I learned all of this from reading and from interviewing Israeli economic development experts. I had no clue if the organizations I’d discovered—and the female entrepreneurs—would endorse my idea once I was on the ground.

So I was anxious. And if I couldn’t even manage to find my hostel, how I was going to start this business?

Miraculously, with a little spotty Wi-Fi and a couple of helpful hotel concierges, I found the hostel. I spent my first evening in Jerusalem chewing a stale piece of pita on the hostel rooftop, listening to Hebrew mixed with French, and gazing over the city.

Then I slept restlessly in my windowless room.

The next day, I began to get some of my more existential questions answered. Like, will people laugh in my face when I tell them what I’m trying to do? In America, there’s a tacit understanding among members of the Jewish community: Sometimes you help someone else simply because they, too, are a Member of the Tribe (the playful phrase being a reference to the 12 tribes of Israel, and the inspiration for the name “Tribelle”).

But in Israel, nearly everyone’s Jewish. So that between-us-Jews bond, paradoxically, doesn’t exist in the same way.

An American-Israeli friend advised me on how to conduct business meetings before I made the trip: “Don’t show fear.”

I tried to conceal it. No one laughed in my face. But they did grill me. How old are you again? Why are you doing this? What’s in it for you?

I must’ve passed the tests, because they began to share their stories.

A woman in her 60s told me her pregnant daughter and her husband had moved back in with her recently; the daughter’s pregnancy was debilitating, and she couldn’t work. Her other son relied on her for financial support, too, as did her mentally ill sister. Since traditional offices wouldn’t hire her (she thought because of her age), she decided to start her own business—and hoped she could grow it enough to employ other friends who were struggling economically.

We’d been talking for 10 minutes at a Jerusalem coffee shop before she began crying. “I’m sorry, I’m sorry,” she said, squeezing a handful of her woven bracelets. “I’m just … it’s a lot of stress.”

Another woman brought her baby and her husband to our meeting. They told me the market for quality jewelry in Israel had dried up because of the country’s economic slowdown, but it was difficult for non-English-speaking locals to market themselves abroad. Another woman told me she crafted her jewelry at night between 1 and 6 a.m.—the only hours her children were asleep.

I spent my last evening at one woman’s home in Beit Shemesh, about 30 miles west of Jerusalem. Nestled into the hills, the city is swaddled in views so charming I wished I had brought my painting tools. She presented trays of cookies and sweetbreads upon my arrival, reminding me that Israelis may be tougher than American Jews—but Jewish mothers are the same everywhere. She told me about what it was like to grow up in Morocco and move to Israel as a kid. About what it was like to find a place in a new type of Jewish community.

Of course, like the U.S., Israel is a country of many immigrants. But it’s also a place where you are, by law, accepted as a citizen if you’re Jewish.

Still, I left Israel with a very different understanding of what it means to be part of a community—a citizen of a larger, global group. For 25 years, I’d always thought that I deserved a spot because of my ethnic heritage. But community membership isn’t about deserving. It’s about carving out a place for yourself—creating your own niche and benefits.

In Israel, I’d found a spot and a purpose in the Jewish world. I felt, finally, like a real Member of the Tribe. And that made the question at the beginning of my trip—“Where are you going?”—a little less scary. I’ve got a rough address, and I’m confident I’ll get there eventually. After all, I’ve got an entire community behind me. But for now, the work to find it is just beginning.