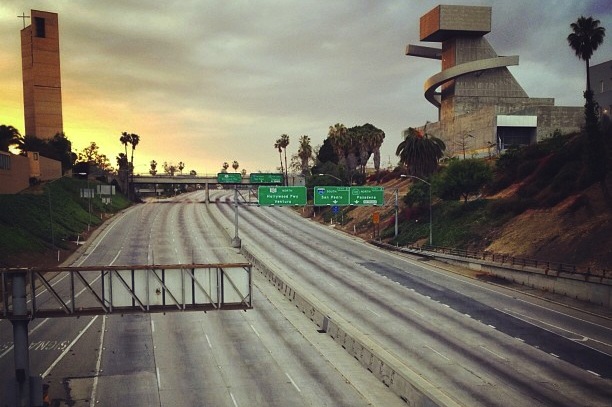 We Angelenos were never supposed to be here.

In an 1868 essay considered so powerful it was taught to schoolchildren for a century, writer and economist Henry George predicted that California would become one of the most prosperous places on earth. San Diego was destined to become a major destination. Oakland’s docks would grow to rival those of “Jersey City, if not of Liverpool.” San Francisco, he wrote, would become perhaps the greatest city in North America, without a rival “for a thousand miles north and south.”

It seems like a glaring omission today. But post-Civil War Los Angeles was small and lacked a natural harbor. No sensible person would think that such a place could have a grand future.

And yet we—more than 10 million of us (and that’s just counting L.A. County)—are here and not going anywhere, a hard fact to which much of the world still hasn’t reconciled itself.

I thought of George’s essay, and the great surprise that is L.A., as I visited “Becoming Los Angeles,” a highly anticipated new 14,000-square-foot exhibition at the Natural History Museum of Los Angeles County, in Exposition Park, next door to the Coliseum and a glorious rose garden.

“Becoming Los Angeles” has many fascinating pieces (slapstick comedy director Mack Sennett’s camera; maps of the L.A. River’s abrupt change of path in 1825; the table upon which the Treaty of Cahuenga, which ended the Mexican-American War here in Alta California, was signed). And it is full of important information about how our land’s history was shaped by cattle. Cows should love the exhibit.

But for anyone looking for a coherent narrative of L.A., “Becoming Los Angeles” is a disappointment. It offers a familiar litany of events—first the Indians, then the Spanish, then the Mexicans, the Americans, the railroad, the oil, Hollywood, aerospace—without connecting them to today’s city. The exhibit focuses on big, non-human factors—geography and land and animals (there is a life-size cow and a life-size grizzly bear) and big machines and infrastructure. But it fails to explain the special appeal the place has had for one very important animal: humans.

One curse of being from Los Angeles is being defined—lazily—by others. We are, take your pick, La-La Land, hopelessly laidback and apathetic; a playground for Lindsay Lohan and other brainless celebrities; a fallen paradise of nightmarish riots and hillside fires; or a thoughtless metropolis of water thieves and air polluters. All these stories say much more about the mindset of the storytellers: Since at least Henry George’s days, we Angelenos haven’t fit the mold, the plans and visions of what should be—so we must be the ones who are wrong.

The L.A. stories that have been imposed on us tend to portray this place—which is really a diverse and sophisticated confederation of hundreds of small villages—as one giant circus. Sometimes, we are victims of global or ideological or industrial forces. In other stories, we are samples in somebody’s database of demographics, stick figures to serve a marketing or political narrative under which a Salvadoran nanny and the Dodgers Hall of Fame announcer Jaime Jarrín must think the same way.

This state of affairs is partly our own fault. We Angelenos have been too busy developing plot points for others to come up with stories of ourselves. So when local institutions like the Natural History Museum tell the L.A. story, they have little to fall back on. The exhibit concludes with a quote from mid-century L.A. writer Carey McWilliams describing the city as a place where “the American people were erupting, like lava from a volcano.” But the exhibit itself never shows us the people erupting or offers an explanation of what truly distinguishes L.A.

Instead, the exhibit takes a narrow approach, dispassionately laying out a series of events that serve the fashionable notion that Los Angeles is unnatural. We’re told that cow poop spread non-native plants, that oil extraction polluted the land, and that boosters somehow convinced people to settle on that land. All of this—naturally or unnaturally, depending on your point of view—raises the faux-profound question of the moment: Is this place sustainable? And we all know what the answer to that is supposed to be. If you want an earful about how Southern California is doomed, just bring up L.A. in a café built on landfill in earthquake-prone San Francisco or in a bookstore on that overpopulated flood plain known as Manhattan.

The standard case against L.A. among the liberally minded is twofold: 1. that it’s been ruined because of overdevelopment and sprawl, and 2. that L.A.’s demographics and diversity make it too hard to fix these problems. Of course, the idea that diversity and growth are going to destroy L.A. is as enduring as L.A. itself. As an Angeleno, I find it fun, and comforting, to go back and read old books and journalism about L.A.’s inevitable disintegration into murderous, poor, and maleducated tribes. (I highly recommend Mike Davis’ preposterous City of Quartz for a good laugh along these lines.)

No one ever seems to admit that today’s reality keeps proving the doomsayers wrong. As Los Angeles has grown larger and more diverse, it has become—by all statistical evidence—safer, less polluted, better educated, and more livable. If the rest of California could stop chanting “Beat L.A.” for a moment, they might take a look around our town and learn something from us, especially about how to make serious investments in the future. Angelenos keep voting to tax themselves to pay for billions in new schools and train lines for generations to come.

Of course, a new narrative of L.A. shouldn’t stop with this good news. As pretty as we are, we have plenty of flaws. For one thing, we are, fundamentally and literally, a city of losers. We are people, or descendants of people, who lost at politics, commerce, love, family, or religion someplace else. (I’m one such loser—descended from Okies who had to flee the Dust Bowl and a great-grandfather who came West after a Midwestern business failure.) All of the booms covered in “Becoming Los Angeles”—railroads, agriculture, oil, aerospace, war manufacturing—ended in bust. We stuck around anyway. When you lose in Los Angeles, the sun will still be shining.

We’re still good at losing. L.A.’s unemployment rate is significantly higher than the state’s, and we have relatively high rates of bankruptcies and business failures. Maybe that’s why this city is so obsessed with winning (Go Lakers!) and keeping up appearances. We’ll tell you we’re having a great day when we aren’t. And many of us endure long working hours and brutal commutes by summoning the ancient stage adage that the show must go on.

Why should developing a coherent narrative about a place so rich in human story be so hard? We could stake a claim to being The Enduring City, in the good and bad senses of that word. Or perhaps The Surprise City, since we weren’t supposed to be here.

But the best choice would be The Human City, a true reflection of our species in all its artifice and ambition: complicated, irrational, creative, crazy, grandiose, glorious, sublime, corrupt, maddening—and still too much a stranger to itself.