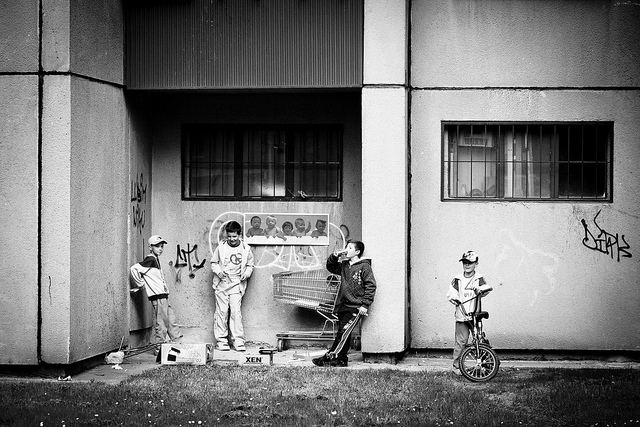 After I retired as a Stockton police captain in 2003, I decided to become involved in new sorts of activities that would help people, particularly youth. I first got on the board of the Emergency Food Bank, where our mission is to make food available to families that are experiencing hunger or food insecurity.

Then, in 2007, I returned to the City of Stockton to run Operation Peacekeeper, a youth gang-prevention project. Operation Peacekeeper tries to counteract gang influence by working to prevent gangs from recruiting young people. It uses the services of outreach workers who have turned their lives around to make connections with young people who might otherwise be vulnerable.

To me, this work represented a return to my roots. I know the area well. I was born in rural French Camp, just south of Stockton, and raised in nearby Manteca. However, I didn’t know anything about gangs until I became a cop in the early 1970s.

In the early 1980s, our police department developed its first gang unit, and, as a patrol officer, I began to educate myself about how gangs work. Over the years, gang members seemed to get younger and younger, and it wasn’t simply because I was getting older. Gangs were constantly changing their recruiting tactics and targeting progressively younger and more vulnerable kids.

Through a lot of difficult police work, I learned that if you want to understand gangs it’s impossible to separate the streets, schools, and home. They are interconnected. Youth are most vulnerable to being recruited into gangs when they are not doing well in school and lack the sort of home support that instills a sense of responsibility.

We made real progress in understanding how gangs worked, but there was more to do. The youth gang-prevention project Operation Peacekeeper, founded in 1997, was part of the city’s larger response. The fundamental idea of the organization was to identify and recruit youth outreach workers who were former gang members or people who grew up in that environment and lost friends and family to gangs. Finding such workers is difficult. Once a person has been in a gang, it is quite difficult to leave and to develop an attitude of working within the system to mentor others. But such people can also be the most effective.

At first, the project appeared to be counting some successes, and the city’s homicide rate went down. But with budget cuts in the last decade and grants running out, it went on life support and was staffed by only one youth outreach worker.

In 2007, I took over the program with the goal of reinvigorating it. This involved hiring more youth outreach workers, providing training, and collaborating with various non-profit and faith-based organizations to expand the program’s reach.

Today, the program has five youth outreach workers and one outreach coordinator. We hope to make it bigger. I try to provide leadership, pursue grants, and maintain relationships with our partners.

The program has been changing. At first, Operation Peacekeeper worked with youth between the ages of 13 and 18, but now we try to intervene earlier, down to the age of 10. We’ve also begun reaching out to older gang members looking for a way to get out of their gang lives.

Our current outreach workers were picked from a very large pool. In selecting an outreach worker, we most often look at what they are already doing in the community. We find that some are already doing outreach through non-profit organizations or churches. When they are already “walking the talk” and have developed an obvious attitude of helping others, we know we have a promising hire. Everyone goes through a background check to screen out anyone guilty of past sex crimes or domestic abuse. They also receive extensive and diverse training and get certified as conflicted mediators.

The caseloads of our workers are huge: over 900 youths per worker. So workers devote most of their time to those who are responding best to the mentoring efforts. Still, they always keep the door open to others should they later decide that they are ready for change.

You cannot save everyone, of course. It is especially frustrating when a youth who has had many hours invested in him goes back to his old ways or decides to get jumped into a gang. It is likewise tragic when we have to attend the funeral of a young person. But other young people manage to make a change, and it is comforting to know that some who would have otherwise ended up in prison or dead will overcome the weakness of prior poor decision-making and succeed.

It is always difficult to measure what does not occur, and often the seed you plant may take a long time to grow. It is gratifying to know when you do change lives. Numerous young men have shown their change by completing their diploma, getting and retaining a job, putting themselves in a more stable living environment and, most importantly, asking how they can help to change others. We often ask these individuals to give their testimony of change to others. These are proud moments for the team.

We have one youth who was convinced he wanted to be the next Al Capone and could not wait to get his hands on a gun; he was 14. His youth outreach worker was relentless in being in his ear and taking him on field trips that included kayaking, fishing, and going to the local university (University of the Pacific) to get the feel of a beautiful and peaceful institution of learning. These efforts successfully introduced him to another world. Over time, the youth began to put it together for himself, seeing that his “friends” were always wanting him to get in trouble, while his youth outreach worker only gave guidance and advice that would bring a positive outcome. The young man came full circle and is now helping to mentor other younger kids. He also got a job in the fast food industry and has plans to further his education.

Part of my job is to coach our coaches. I spend a great deal of time reassuring the outreach worker team members of the value of what they do, regardless of the setbacks. We also, through trial and error, are constantly adjusting how we reach out and talk to young people.

We struggle not only on the streets but also in schools and homes. Many responsible parents (though others are indeed irresponsible) continue to miss the early warning signs of gang involvement, even when we point them out. Mothers tend to be the biggest challenge; we observe denial and hear “not my baby” comments when facts are brought to their attention. And, when there is no responsible parent in the home, it’s imperative that someone else like an uncle or family friend step up and be active in the child’s education, making sure homework is done and monitoring the child’s activities.

You cannot start these interventions too early. Life skills should be taught in the formative years—and clearly prior to high school. In the end, joining a gang and engaging in violence is a matter of personal choice. Choices are made based on beliefs; faulty decision-making is a result of faulty beliefs. As humans, we tend to believe what we have been taught. Gang members teach youth to believe that violence is the answer and that respect is a one-way street. To change this, adults must teach young people to think differently. When they think differently, they will behave differently. Most important, adults must remember that what you do is far more important than what you say.